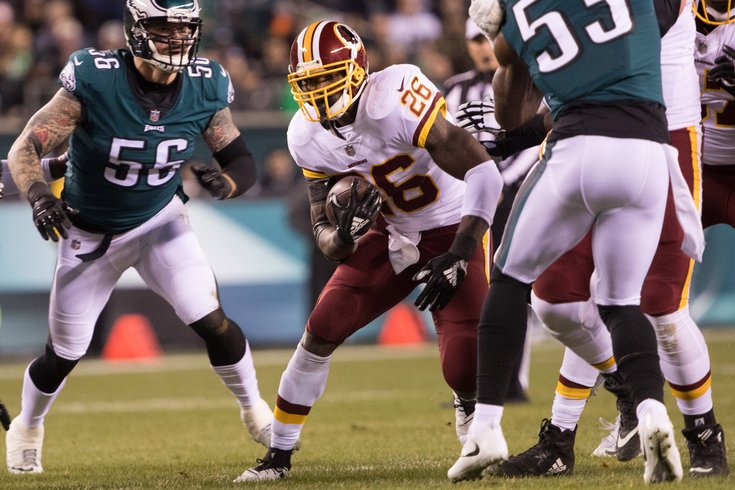 Offensively, Adrian Peterson is all the Redskins have left.

The Philadelphia Eagles will head into Landover, Maryland on Sunday, needing a win for any chance of making the playoffs, and they'll face a Washington Redskins team that has been absolutely destroyed by injuries.

The Redskins' passing game has, um, what, exactly? They're on their fourth quarterback (Josh Johnson), and they're missing both their No. 1 receiver (Paul Richardson) and their best passing game weapon (Jordan Reed).

The one player who remains a viable threat to do damage is Adrian Peterson, who had a 90-yard TD run against the Eagles Week 13 in Philadelphia.

That 90-yard run aside, Peterson didn't do much, as he had eight carries for eight yards otherwise.

The Eagles are going to play a ton of zone defense in this game, making Josh Johnson try to fit balls into windows with his arm, with defenders being able to look into the backfield in case Johnson takes off running.

In his three appearances this season, Johnson has shown a willingness to run with the football:

"Most quarterbacks in the NFL (have athletic ability) now," Schwartz said. "He's made a lot of big plays the last couple weeks. Almost led them to two victories over the last two weeks that he's been a starter. Big win against Jacksonville and driving the team late and had an unfortunate interception late in the Tennessee game.

"But his ability to keep plays alive with his feet similar to what we've seen from a lot of guys this year. From Cam Newton, Deshaun Watson, and now this week. So that'll certainly be part of the equation."

One last time this season, let's go ahead and update what some running-capable quarterbacks have done against the Eagles since 2017, in chronological order:

The Eagles must be mindful, especially on third down, that Johnson is likely going to have more confidence in his legs than his arm.

In previous seasons, DT Fletcher Cox vs. RG Brandon Scherff was a fun individual matchup to watch. With Scherff and starting LG Shawn Lauvao both done for the season, the Redskins are undermanned on the interior of the offensive line, and could be vulnerable to the Eagles' interior defensive front.

Starting in place of Scherff will be Tony Bergstrom. Starting in lace of Lauvao initially was Jonathan Cooper, who also went on IR. Now it's Luke Bowanko.

Cox, Timmy Jernigan, and whoever else lines up at DT for the Eagles must dominate those tomato cans.

4) The Eagles' offensive line vs. the Redskins' defensive front

The Eagles kicked the Redskins' asses up front in the first matchup this season, despite the Redskins having a young, talented front.

On the interior, Jonathan Allen, Matt Ioannidis, and DaRon Payne have combined for 20.5 sacks. On the outside, Ryan Kerrigan is quietly having a great season, as usual, as he has 12 sacks, 16 tackles for loss, and 3 forced fumbles.

A week ago, Lane Johnson made J.J. Watt a non-factor. Obviously, Kerrigan and Johnson know each other well, and Kerrigan has done the most damage against the Eagles when Johnson has been out.

The Eagles are the only team in the NFL to have five different running backs lead the team in rushing in at least one game this season. It's been an unstable position all season long, and remains that way heading into Week 17. For the last two months or so, Josh Adams has been the lead back, but he's been totally ineffective the last couple weeks, carrying 26 times for 49 yards (1.9 yards per carry).

If the Eagles are to get into the playoffs, it would be kinda/sorta ideal for them to figure out what formula works best for them, because they haven't yet, though injuries have obviously factored in.