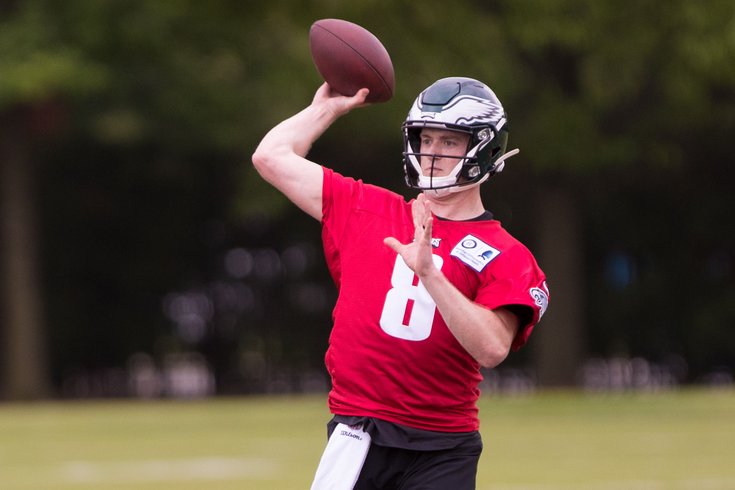 Like Jay Cutler, Clayton Thorson came from a school where he didn't have much help.

During this dead period of the offseason, we've been comparing each of the Eagles' rookies to current NFL players. Today we'll finish off the series with fifth-round quarterback Clayton Thorson.

First, who did Thorson pattern his game after?

"I always watched Peyton Manning and Brett Favre growing up, Tom Brady, all those guys," Thorson said. "But who did I model my game after? I don't know. I try to take a few things from each guy. Aaron Rodgers gets out of the pocket and makes plays. You see how Peyton moves within the pocket and made plays. Obviously Brady does all that stuff too. I just try to learn from all of them, and then being around Carson Wentz, I can learn from him too. I don't know if there's one certain guy. I try to take a lot of things from all those guys."

Who does Thorson remind me of?

Being a fifth-round rookie quarterback, I tried to comp him to a career backup, but I really couldn't come up with anyone that fit. The guy he sort of reminds me of that you've all heard of? Jay Cutler, minus the cannon arm.

Let's go through the similarities.

• Their college careers were similar in many ways. They were both four-year starters at schools that are traditionally overmatched against their conference opponents. Thorson went to Northwestern; Cutler went to Vanderbilt. While both of those schools have occasional decent seasons, both quarterbacks didn't have a lot of help from their skill position players or offensive lines during their tenures. Partly as a result of their lack of talent as well as their willingness to take shots down the field anyway, they both had bad completion percentage and INT numbers.

Even playing with lesser talent, if we're being honest, those are some pretty ugly numbers by both quarterbacks, particularly in the yards per attempt column.

• On the positive side, stats-wise, both quarterbacks were effective runners near the goal line, as Thorson had an impressive 27 career rushing TDs, while Cutler had 17.

• Thorson reportedly scored a 31 on the Wonderlic, while Cutler scored a 29, for whatever that is worth.

The biggest difference between the two, obviously, is arm strength. I've seen Cutler close up in action, when the Eagles and Dolphins had joint practices in 2017 for a week in Philadelphia. At the time, Cutler was 34, and had just come out of retirement after Miami lost Ryan Tannehill with a knee injury. And yet, that dude could still rip it. I've attended Eagles training camps since 2010, a smattering of Giants camps, and the Senior Bowl most years, and have seen a few big-name quarterbacks close up in my day. In terms of arm strength, I would put Cutler second in the velocity department, behind only Michael Vick.

So to be clear, Thorson does not have Cutler's arm strength, which was by far his best attribute. That's why he got drafted in the first round, while Thorson went in the fifth.