The 38-year-old future Hall of Fame lineman will fill in for injured All Pro Brandon Brooks, who tore his Achilles this offseason 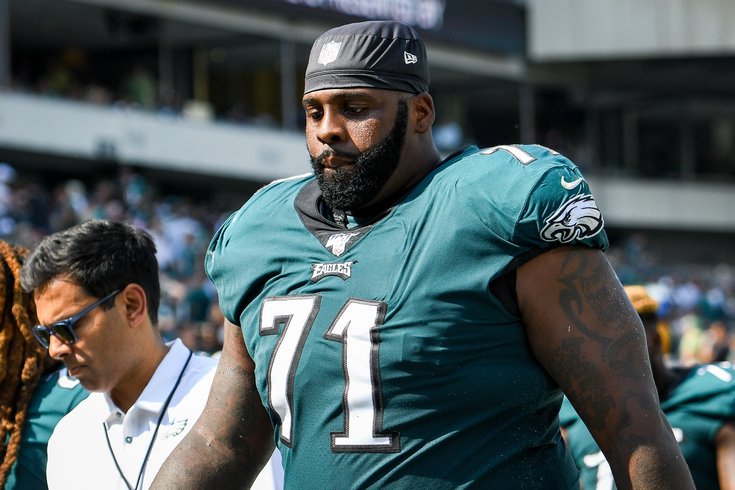 Put me in coach, I'm ready to play.

That's what I assume Jason Peters told the Eagles Tuesday morning, when he reportedly agreed to re-join the team he became a legend playing for. Peters will do something many thought would never happen — he'll slide from left tackle to guard. Right guard, as a matter of fact.

Roster Move: #Eagles have agreed to terms with G Jason Peters on a one-year contract. pic.twitter.com/3VeUcCzOpx

Peters' deal, according to reports, will be worth up to $6 million, with $3 million guaranteed.

The loss of Brandon Brooks to yet another devastating injury opened up a starting spot on the Eagles offensive line. Many pondered how the Eagles would handle it, with some internal options like Matt Pryor looking to have the inside track at the job but few concrete reliable answers. Now, it appears they have their answer, with a future Hall of Fame tackle slated to make the move to a new position on the opposite side of the line.

Getting some more info on this...

Jason Peters will play RG, not left guard. Eagles believe he can make the transition.

They also think he can help at swing tackle if something happens to Dillard. Key leader on team.

The move is not at all about Dillard. He's the starting LT.

Peters, 38, left as a free agent and tested the waters all spring and summer.

Jason Peters had options early in free agency as a tackle, per his agent Vince Taylor of Elite Loyalty Sports. Decided to bide his time and when the #Eagles offered an opportunity at guard he hopped at the opportunity to return. "His heart is just in Philly," Taylor said.

Prior to Brooks' torn Achilles, Peters' return was a much more controversial idea. With last year's first rounder Andre Dillard waiting in the wings to start on the blind side opposite Lane Johnson, Peters would have either been a backup to Dillard, or would have forced the prospect to sit on the bench for another season. This allows for Dillard to grow, but also provides some potential relief at the position should Dillard struggle or go down with an injury.

From left to right, the Eagles offensive line will now look like this: Dillard-Isaac Seumalo-Jason Kelce-Peters-Lane Johnson.

Peters started 13 games last season and played in 75% of the team's snaps at left tackle. The veteran has appeared in 205 NFL games, all at tackle.

The signing also leaves Eagles fans wondering if this piece of news was the "big news coming this week" that NFL insider Brian Baldinger teased fans with, or if there is another signing to come.

.@Eagles #FlyEaglesFly I am hearing whispers about big news coming this week. #Birds could get a lot better in mid-July #BaldysBreakdowns