What's the latest on the veteran wide receiver heading into camp? How does the team — and his teammates — view him? And is he worth the trouble? 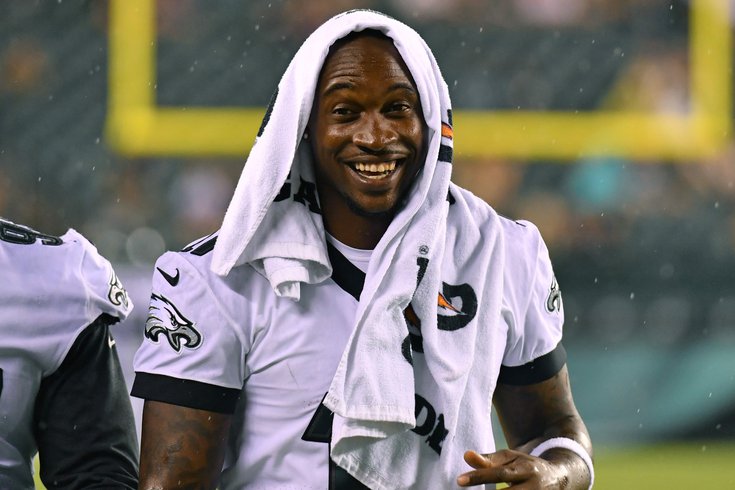 Back in February, we published something of a primer that laid out all the financial ramifications of any sort of trade or release of Alshon Jeffery.

For the purpose of bringing those up to speed who haven't been following along closely, the short recap version is that Eagles made the error of guaranteeing Jeffery’s 2020 salary ($9.9 million) in exchange for a small pay cut just before the start of the 2019 season. Jeffery then had the “bad year trifecta,” which made that decision a disastrous one.

If the Eagles could have cut Jeffery without penalty, he would already be gone. However, as a result of the re-done contract, Jeffery's release would have come with an approximately $26 million dead money charge, spread over 2020 and 2021.

If they traded him, that dead money charge would "only" be about $16 million. To note, they would trade him for literally anything to save that $10 million in cash.

Now that we're caught up, let's answer some questions.

Personally speaking, I don't have Saul Berenson-like government clearance to see what civilians are texting back and forth to one another, so I'm not privy to any sort of transcribed communication between Jeffery and Anderson. I was also not present if Jeffery spoke with Anderson in person, in some sort of darkened parking garage. So in that respect, Jeffery can halfheartedly deny that he was the source, as he did during the season, and Anderson can say that Eskin has "zero knowledge" of who she spoke to, but the reality is that it's in both of their interests to deny, obviously.

Many fans have questioned Eskin's credibility on the subject, while others have chosen to pin it on outgoing players like Nelson Agholor or Malcolm Jenkins. However, I can confirm via a half dozen sources that it is accepted as fact inside the Eagles' organization that Jeffery was indeed Anderson's source.

There's no debate here, at least as it pertains to perception inside the walls of the NovaCare Complex. So can we acknowledge that and move forward? Cool. The next question is...

Is it a big deal?

The Eagles don't think so. To begin, they don't think that Jeffery is some kind of malicious team cancer with a personality capable of tearing apart a locker room and wrecking the team. Instead, they view him as harmless, but naïve, and unaware of the consequences that can come with casually communicating with a reporter looking to create headlines.

One team source even noted that Jeffery jokingly-but-meaningfully told Howie Roseman himself that he dropped the ball by not trading for Jalen Ramsey, which of course was one of Jeffery's gripes to Anderson. Anyone who has interacted with Jeffery, who is quiet and soft-spoken, can understand the Eagles' viewpoint that Jeffery isn't Terrell Owens.

The opinion here is that yes, it should be a big deal! If it were a young, immature player, then yeah, OK, he'll learn. Or if it had only happened once, then, alright fine. But as Michael Scott once said, "Fool me once, strike one. Fool me twice, strike three."

The bottom line is that Jeffery caused major distractions in each of the last two years, the latest of which was the week leading up to a 37-10 shellacking at the hands of the Dallas Cowboys.

Maybe there's some logic that should Anderson publish "anonymous" quotes from a player bashing Wentz for a third straight season, the reaction would probably just be, "Oh, Alshon, you scamp, you." That's probably wishful thinking.

Is he worth the trouble? As in, is he even still a good player?

Jeffery has never been the fleetest of foot, but he still made plays throughout his career. In 2019, the impressive plays just weren't there, and he looked slower than usual. Beyond the "eye test," Jeffery's production was bad:

What Jeffery's critics think, however, doesn't matter. If you're among those critics, the team is higher on Jeffery than you are. The Eagles are already paying for him, and the way it was explained to me, they don't think he's worth nothing. Yes, we're aware that's a double negative. ¯\_(ツ)_/¯

They also believe that he's going to attack the 2020 season with a chip on his shoulder, and something to prove.

And then there's the whole pandemic angle. The team's thinking is, who knows who is going to be available from week to week? If they have a few receivers out with COVID, for example, and Jeffery is healthy, than they'd rather have him than not.

What about Wentz? Is the team doing their quarterback a disservice by keeping Jeffery?

As noted above, while Wentz and Jeffery may not be besties, Jeffery isn't some monster, and an outwardly adverse relationship doesn't exist between the two players. Ultimately, Wentz wants to win, and given the choice between throwing passes to Jeffery or (fill in some back of the roster practice squad receiver), he'd surely prefer Jeffery.

So is Alshon gonna be on the team or not?

Jeffery is almost certain to start training camp on the PUP (Physically Unable to Perform) list. He can come off of PUP at any time during training camp, but must remain on PUP for at least six weeks if he is still on it at the start of the regular season.

Trading Jeffery is still possible, but unlikely. Any team trading for Jeffery would be acquiring a slow, recently injured receiver who has anonymously bashed his quarterback (no matter how innocently it might be framed) in each of the last two seasons. He would count for $9,910,000 on any acquiring team's cap, but more importantly, he would deplete $9,910,000 of that team's cash.

If some GM called up Roseman and said, "Hey give us your fifth rounder next year and we’ll eat $10 million in cash for you," Roseman would have Jeffery on the first flight out of Philly. But that call probably isn't coming.