Despite his age, could he actually make more sense for the Birds than Jadeveon Clowney and others? 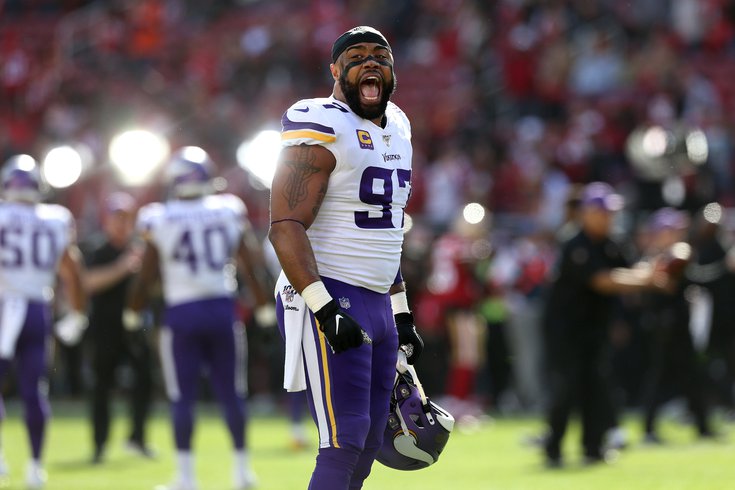 There's been a lot of talk this offseason about the Eagles needing some more depth at defensive end, and the names that keep popping up over and over again include free agent Jadeveon Clowney and Jaguars malcontent Yannick Ngakoue.

Both, obviously, would be big additions to Jim Schwartz' defense, but both would also cost the Birds quite a bit — even as Clowney's asking price continues to drop with training camp approaching. Ngakoue, who was hit with the franchise tag in Jacksonville, would likely cost the Eagles a first-plus if they want to trade for the talented pass rusher's services. However, he has yet to sign that tag and there is a belief among some that he may threaten to simply sit out the season in efforts to land a long-term deal and push his way out of Jacksonville. If that plays out, obviously his asking price could go down.

But what if there's another player out there, one who wouldn't cost the Eagles nearly as much, but might be a short-term solution for exactly what the Birds need? And what if he, like Ngakoue has in the past, expressed interest in playing in Philly? Is that something you might be interested in?

Enter free agent pass rusher Everson Griffen, who has spent all 10 of his NFL seasons in Minnesota and has made four Pro Bowls in the process. Now 33, Griffen remains on the market, and over the weekend he replied to a tweet suggesting the Eagles should be focused on him, and not Jadeveon Clowney (following some recent rumors regarding Clowney and the Eagles).

Take a look for yourself...

Griffen, who had eight sacks and 11 tackles for a loss in 15 games last season, would be a good fit in Philly, and would fit nicely into Schwartz' rotation at the position.

Here's what we wrote about Griffen earlier this offseason, when we thought he was the best fit among a group of big-name players that included Ngakoue, Clowney and Ziggy Ansah:

And finally, there's Everson Griffen, the guy who might make the most sense of any of the players listed in this section. Last season, he was considerably cheaper and much more effective than both Clowney and Ansah, finishing with eight sacks in 15 games while playing nearly 80 percent of his teams snaps. He's now 33 years old, and might be OK with taking a slightly reduced role in order to improve his career longevity and be part of a winning team. As our own Jimmy Kempski pointed out, the Eagles have sung Griffen's praises in the past leading up to games against the Vikings, so maybe there's some interest there.

While Ngakoue seems like a pipe dream at this point — I mean, landing a 24-year-old Pro-Bowl defensive end in mid-July would be quite the coop (and quite costly) — Clowney, especially given his decreased asking price, always seemed like the greater possibility. But that doesn't mean he's the best option. As the guys over at WIP pointed out on Monday morning, even despite the age difference between the two, Griffen might be the better (and cheaper) option:

Only twice in Griffen’s ten NFL seasons has he played in fewer than 15 games, his rookie year and the 2018-19 season, and he has played or started in all 16 regular season games in five of those seasons.

Jadeveon Clowney can’t say the same. In Clowney’s six NFL seasons he has played or started in all 16 games once, the 2017-18 season. The 27 year old has never had a double digit sack season. For the 2019-20 season Clowney played in only 13 games, starting 11 of them, and had only three sacks to go with his 30 pressures and seven tackles for loss.

Griffen will turn 33 in late December, making him almost a full six years older than Clowney. Age has been kind to the former Viking though, he has had at least eight sacks in six of his ten seasons, and in five of his last six. Clowney has done so only twice in his six seasons.  [94wip.radio.com]

Sure, the Eagles have made it a point to try to get younger this offseason, but it's unlikely that either of these players would be signed to massive, long-term deals. And signing one veteran player to fill an area of need a couple weeks before training camp is hardly a sign that the team is abandoning their offseason mission.

Theoretically, the Eagles have enough to sign either Griffen or Clowney, but given the uncertain financial future of the league amid the COVID-19 pandemic, Howie Roseman and Co. are likely going to want to carry over as much of their free salary cap space as possible, especially when you factor in that, despite all the space they have this year, they are projected to be more than $50 million over the cap in 2021. Still, they have some space if they need it, especially if it's a short-term deal.

If the Eagles do want to make a move, time is running out. However, it appears they already have something in the works that could be announced at some point this week.

.@Eagles #FlyEaglesFly I am hearing whispers about big news coming this week. #Birds could get a lot better in mid-July #BaldysBreakdowns

Could that mean the Eagles are signing Griffen, and his tweet was more of an cryptic message than we thought? Could it be Jadeveon Clowney turning from Eagles villain to newest member of the team? Could it mean an offensive addition like Devonta Freeman or LeSean McCoy at running back? Or, with Baldinger teasing that the Eagles could get "a lot better," does it mean Roseman is on the bring of pulling off the improbably and trading for Jamal Adams?

I guess we'll have to wait and see, but it certainly sounds like big news is on the way...

MORE: WTS: Clowney still in play for Eagles, Wentz ahead of Prescott in rankings, more