The Eagles' trade for Golden Tate has aged horribly

In a few months, maybe Golden Tate will hoist a Super Bowl MVP trophy over his head after a thrilling three touchdown performance over the Kansas City Chiefs in an incredible Philadelphia Eagles' repeat championship. Or maybe they pissed away a third-round pick on an eight-game rental.

That's no fault of Tate, of course, a very good, highly-competitive player who had just under 2,600 receiving yards in the previous 2.5 seasons with the Lions at the time the Eagles sent a third round pick to Detroit for his services. Unfortunately, Tate just didn't make much sense for the Eagles in terms of value or fit.

For eight games of Tate, who will be an unrestricted free agent at the end of this season, the Eagles traded a third-round pick. If the season ended today, that would be the 75th pick in the 2019 NFL Draft. Realistically, the expectation is that your third-round selections turn into starters, or at least solid role players.

Like any draft pick, third-round picks can bust, and the Eagles have had their share of those in the third round. On the other hand, you can also find elite talent in the third round. For example, Saints RB Alvin Kamara, Chiefs RB Kareem Hunt, Titans S Kevin Byard, Jaguars DE Yannick Ngakoue, Cardinals RB David Johnson, and Vikings DE Danielle Hunter, to name a few third-rounders since 2015, are star players.

Just as importantly for the Eagles' purposes, third-round picks are incredibly cheap labor. The 75th pick in the 2018 NFL Draft, Chiefs DT Derrick Nnadi, is making less than $1 million per year on a four-year rookie contract worth $3,745,600.

As we noted in detail in October, the Eagles won't have much in the way of financial resources to attack the free agent market in 2019 (and likely beyond). It is imperative that they find cheap, young talent via the draft.

Of course, there's the idea that if/when Tate walks in free agency after this season, the Eagles will receive a compensatory pick in return, as long as they lose more players in free agency than they gain, which is likely. Some have gone as far as to suggest that the Eagles could receive a third-round comp pick (the highest comp pick level) in return for losing him.

A third-round comp pick in return for Tate is almost certainly not going to happen, as the level of comp pick received for losing players in free agency is based on how much the free agent receives on the open market. The pricier the contract, the higher the comp pick. Tate is currently on pace for 85 catches for 973 yards and five TDs in 2018, and he will be 31 years old before he suits up for a regular season game on whatever team he plays for next season. He is simply not going to be among the tippity-top earners in 2019 free agency.

In 2017, the 49ers drastically overpaid for Garcon, giving him a five-year deal worth $47.5 million. Garcon has 786 yards and 1 TD in a season and a half in San Francisco since signing that deal. Even if the NFL doesn't learn a lesson from the bad Garcon deal and Tate receives a deal just as lucrative, it's worth noting that Garcon would have only counted for a fourth-round comp pick had he not been canceled out in the comp pick formula: 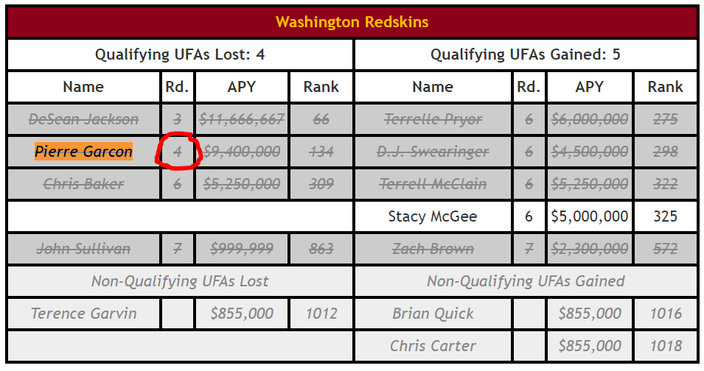 And oh by the way, that potential fourth-round comp pick for Tate is more accurately a pick in between the fourth and fifth rounds, and it would be in 2020, not 2019, like the likely early third-round pick the Eagles traded for him. In a best case scenario, it's the (projected) 75th pick in the 2019 draft vs. roughly the 135th pick in the 2020 draft, the difference of which, on the NFL draft trade value chart, is, hey (!), a mid-third-round pick!

Of course, should Tate suffer some kind of long-term injury, like comp pick bait players Jay Ajayi and Ronald Darby did, Tate's value on the open market would plummet, thus lowering his comp pick value even further.

But, but, but, what if the Eagles sign Tate long-term? Then trading for him would be worth it, right?

Well, if they were to do that, then they will have wasted a third-round pick on a player they could have gotten for nothing in free agency. And there's also this...

Tate is a bad fit for the Eagles' current needs

Ideally, the Eagles would employ a speed receiver capable of making plays down the field and keeping opposing defenses honest, opening up the intermediate areas of the field for Alshon Jeffery and Zach Ertz.

Both Cooper and Anderson are outside receivers with deep threat ability, while Tate has been more of a slot receiver in recent seasons, who makes the vast majority of his receptions near the line of scrimmage. Even before the Tate trade, the Eagles were playing a slot receiver in Jordan Matthews on the outside because they didn't have any better options. Tate doesn't do much to fix that specific hole.

On Tuesday, offensive coordinator Mike Groh admitted that it's been "challenging to integrate him" into the offense. While that's certainly not a good look in any way for Groh or Doug Pederson, it's also really not that surprising, given the Eagles' personnel that is already in place.

Honestly, Groh's comments were something of an honest, "no duh" assessment, as the eye test has backed up the Eagles' struggles finding ways to use Tate. Against the Cowboys, they ran a trick play in the red zone on 2nd and 13, when they threw a short pass to Ertz, who then lateraled to Tate. That play went for a modest six yards. Against the Saints, Tate was tackled for a loss of eight on a reverse.

Rather than inserting Tate into the lineup in a defined role, the Eagles appear to be trying to use him as more of a package player in their offense, with individual plays drawn up for him. Tate's addition to the lineup has also meant fewer snaps for a good, young player in tight end Dallas Goedert, who played 56 percent of the team's offensive snaps in the two games before the trade, and 30 percent of the snaps in the two games after.

In summary, the Eagles traded a valuable draft pick that they need now more than usual because of their salary cap restrictions, for an aging, eight-game rental who they admittedly don't even know how to use.