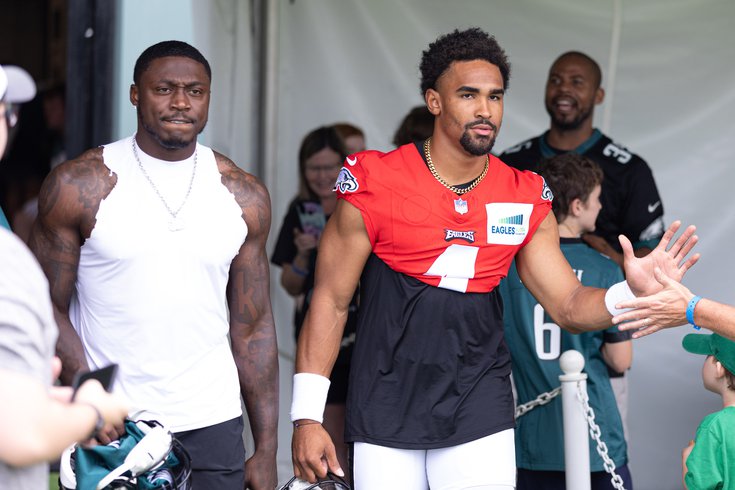 Through the first eight practices of Eagles’ training camp, including Sunday night’s open session at Lincoln Financial Field, you can feel comfortable with at least one prediction when it comes to the team’s passing offense: A.J. Brown and Dallas Goedert are going to see the football a heck of a lot.

On the surface that hardly seems like a problem because those are the best options at Jalen Hurts’ disposal. That evident by a spectacular 30-yard touchdown pass to Brown down the right sideline Sunday when the QB1 delivered one of his best passes of the summer with James Bradberry in tight coverage and Marcus Epps closing in.

Brown is already a borderline top-10 NFL receiver despite having never played with a high-volume passer and Goedert has quickly developed into a player with the ability to be a top-five tight end in the post-Zach Ertz era in Philadelphia.

That said, you’re going to make it awfully easy for opposing teams to game plan for the offense if the traffic pattern in training camp is duplicated when it counts.

Through five practices, the Eagles’ third option in the passing game had 10 targets compared to 36 for the Brown/Goedert duo (18 each), per WIP’s Eliot Shorr-Parks, who keeps track of such things.

That demarcation line is important because DeVonta Smith has been out with a groin injury since and the first-team passing reps have only tilted more to the top two options since.

Before Shorr-Parks even posted the numbers, I made the inquiry to him wanting to know if my perception of things being heavily weighted toward Brown and Goedert was backed up by the numbers.

It was an interesting subject to me because a week or so prior to that conversation a former NFL personnel executive had been discussing the shifting landscape in the NFL when it comes to how quarterbacks are taught in the modern era.

The exec, who wasn’t discussing the Eagles, was explaining that a progression-based passing offense is yet another old-school trope living in inertia more than anything else.

My question to the former executive was how prevalent are real progression-based passing offenses in the modern NFL?

“You may see one [real progression] for every six or seven passes,” he explained. “That’s not an official stat, just an observation off the top of my head. It’s been a slow but steady change over the past 10 years.”

That ratio is only going to spike further once quarterbacks like Tom Brady, Aaron Rodgers, Matt Ryan and Kirk Cousins move on.

“Most of what’s done now is either picking a side based on safety alignment or based on man/zone coverage,” the scout noted.

When Tony Romo first wowed on-lookers in the television booth by “predicting plays,” he was simply reading the safety alignment the QB is taught to hone in on and explaining the proper read and where the football should go.

The change is rooted in the trickle-up nature of the football industry. There is more innovation at the college level than the pro level.

For years coaches in the NFL would bemoan that QBs weren’t being taught what they needed at the college level instead of understanding that they needed to build on what the top-tier prospects were being schooled in.

The lesser prep time afforded meant simplifying things. The working smarter not harder philosophy that’s now been adopted in the NFL out of necessity after CBA scalebacks to offseason work.

Instead of the Bill Walsh Cheesecake Factory playbook with the overcomplicated flex-like verbiage, the goal became simple math.

“It’s easier to teach concepts than plays,” an offensive coach said. “... It’s more efficient to go about it that way.”

On Sunday I asked Sirianni what was going on with the lopsided target numbers.

“I think you're constantly trying to make the plays for your playmakers,” the coach said. “… We know that's how we like to play offense, too. That's who the offense runs through. That's no secret. We run the offense through — now we have three guys [Smith, along with Brown and Goedert] to really run the offense through, and we're excited about that.”

What this all means in regard to Hurts, however, is the debate about him understanding a previous generation’s expectation of progressions is a waste of time.

The same was true with Carson Wentz and the previous coaching staff with the “too much Ertz” mantra.

That’s why Sirianni harps on decision-making so much.

Full-field progressions still do exist but they are generally limited to QBs with extensive experience.

Younger signal callers are being coached on where to go with the football based on the defensive alignment and that means it’s up to the coaching staff to show enough discipline to mix and match the primary targets on certain plays, especially when your third option is a talent like Smith.

“The coverage can take the ball to where it needs to go,” said Sirianni. “I think Jalen is doing an awesome job at that, of going where he needs to go with the ball based off the defense.”

John McMullen is a contributor to PhillyVoice.com and covers the Eagles and the NFL for Sports Illustrated and JAKIB Sports. He’s also the co-host of “Birds 365,” a daily streaming show covering the Eagles and the NFL, and the host of “Extending the Play” on AM1490 in South Jersey. You can reach him at jmcmullen44@gmail.com.