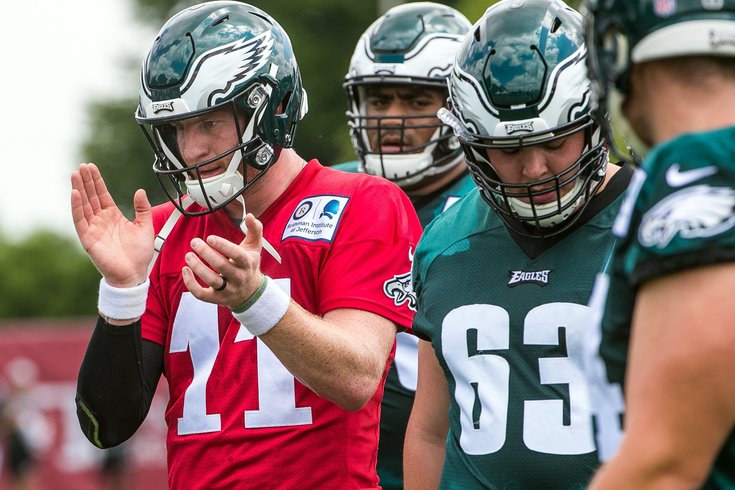 Day 2 of Philadelphia Eagles training camp is in the books, and while the Birds aren't yet in pads, they did have their first "real" practice of camp, as opposed to yesterday's "10-10-10" practice. As always, we have notes.

• Carson Wentz looks good both throwing, and running around. I haven't yet been able to get good video of him running over the last two days (that opportunity will present itself eventually), but there is clear progression there since the last time we saw him in the spring.

Here's a video of Wentz throwing. Everything looks good here. If you were an alien who parachuted in from some other galaxy (where they also have football, obviously) and you saw this throw, there'd be no indication at all that he has any knee issues, knee brace aside:

• Wentz seems to be picking up right where he left off with with Zach Ertz. Wentz fired a laser to Ertz in 7-on-7's, which Ertz laid out for, making an impressive diving catch.

I was curious who the top quarterback-tight end combination in NFL history is, statistically, and wondered if Wentz and Ertz could eventually eclipse them, seeing as they entered the league within three years of each other and both should have long careers. It turns out that Tony Romo and Jason Witten have the most completions, with 632. Philip Rivers and Antonio Gates lead in yards (7,525) and TDs (72).

Wentz and Ertz have hooked up for 135 catches for 1,479 yards and 11 TDs so far. That's an average of roughly 68-740-6 per season. If they stay on that same pace, here's how many seasons it will take Wentz and Ertz to eclipse each record:

It's doable, especially considering Wentz and Ertz could very well continue to exceed their own yearly averages.

• We don't often mention the players you already know are really good, but Malcolm Jenkins had an impressive leaping interception of Nick Foles. It was on the opposite side of the field, so I wasn't quite sure who it was at first, so my first thought was, "Holy crap, who's that?" Then when I saw, it was like, "Oh, just Malcolm."

• Markus Wheaton came up with a really nice sideline catch today in which he was able to keep both feet in bounds. Wentz found Wheaton behind the corner and in front of the safety in the vulnerable area of the Cover-2 defense on the play. While some quarterbacks really struggle making that throw, it's no issue at all for Wentz, even as he still recovers from his injury. In other words, Wentz's arm strength is not an issue in the slightest.

• Rasul Douglas had a great sequence today. Foles was trying to hit Nelson Agholor on a double move against Douglas, even throwing an emphatic pump fake, but Douglas didn't bite and was able to run stride-for-stride with Agholor all the way down the field, ruining the play.

On the very next play, Foles hit him with another pump fake, but Douglas didn't bite once again and stayed in the hip pocket of Kamar Aiken.

Douglas' M.O. coming out of college was that he was a gambler. He had a high number of interceptions, but was susceptible to double moves. I almost wonder if Jim Schwartz asked if the offense would throw a couple double moves Douglas' way to see how he would respond. In any event, he responded very well.

• Nelson Agholor caught a short pass and took it the distance. Ronald Darby slipped and fell on the play, but sprung to his feet quickly and tried to "tackle" Agholor, to no avail. Darby might have recovered against many other receivers, but Agholor was too quick and fast to be caught. Maybe sometimes we underrate Agholor's big play ability?

• We should probably mention that Mack Hollins is getting a lot of first-team reps with Alshon Jeffery on the PUP list. There's isn't too much to note there, good or bad, but it has to be a confidence boost for Hollins to be playing every down with the cool kids.

• Jake Elliott has no training camp competition this year, but it's still worth monitoring his kicks, which we'll do over the next three weeks.

Also, after practice, I asked him to rank the stress level of his Super Bowl field goal to put the Eagles up 8, his 61-yarder, and his game winner against Oakland. His ranking: