Stolen in1955, and now on permanent display

The Mütter Museum fully embraces its reputation as a disturbing — and sometimes disgusting — collection of unique medical oddities. “Don't eat shortly before visiting” is a common warning given to those touring the museum for the first time.

Of the more than 25,000 objects in its possession, only a small percentage goes on display at any given moment. But its permanent exhibitions, while relatively small in number, pack a major punch. A plaster death cast of conjoined twins' Chang and Eng accompany a glass container preserving their fused livers. The famous Mega Colon is a nine-foot-long diseased colon, formerly owned by a man who died from chronic constipation at age 29 with 40 pounds of feces in his intestines. And a glass coffin contains the Soap Lady, a Philadelphia woman whose body turned into a wax-like substance called adipocere.

As a contrast to its other high-profile exhibitions, one of the Mütter's most prized specimens is a humble box of 46 neatly organized glass slides. The wooden box and its contents — slices of a human brain — aren't gruesome or outrageous in the least. What makes this a treasure is that these slices originate from one of the greatest minds of human history: Albert Einstein.

The Mütter Museum, part of the The College of Physicians of Philadelphia, is the only place in the world where the general public can see Einstein's brain on permanent display.

The world-renowned physicist and Nobel Laureate actually wanted his body cremated after death, to discourage “Einstein groupies” from worshipping his remains. But a Princeton Hospital pathologist named Thomas Harvey went rogue and brought his brain to Philadelphia, where parts of it have been circulating for 60 years, finally landing at the Mütter in 2011.

“After Einstein passed away, Dr. Thomas Harvey was the pathologist in Princeton who performed his autopsy — and without the family's permission, he took the brain,” said Anna Dhody, curator of the Mütter Museum. “His brain was removed from his body without initial consent.”

On April 18, 1955, Harvey effectively “stole” Einstein's brain along with his eyeballs (which were gifted to the scientist's eye doctor). A few days later, he managed to receive permission from the family given that it would be used for scientific research only. The brain was then brought to Philadelphia to be turned into microscope slides in a lab at the University of Pennsylvania.

“The woman who prepared the slides, Marta Keller, was a lab technician at Penn Medicine's Department of Pathology,” said Dhody. “She was one of the best in the area, and with Penn being one of the foremost medical schools in the world, this was apparently the woman to go to if you wanted your brain made into slides.”

Keller and Harvey carefully whittled down the precious specimen into 1,000 slices thinner than a human hair, then stained and mounted them on glass slides. Boxes containing several slides were gifted to prominent neuropathologists, including Philadelphia's own William Ehrich. As chief of pathology at the Philadelphia General Hospital and Penn's Graduate School of Medicine, he kept his box of 46 slides until his death in 1967. Then Ehrich's widow passed it along to pathologist Allen Steinberg, also at Philadelphia General Hospital.

“Dr. Steinberg gave the slides to Dr. Lucy Rorke-Adams, a noted neuropathologist who is still alive and a longtime Fellow of The College of Physicians of Philadelphia,” Dhody said. “She had these slides on her desk for decades and decided in November 2011 to donate them to the Mütter Museum.” 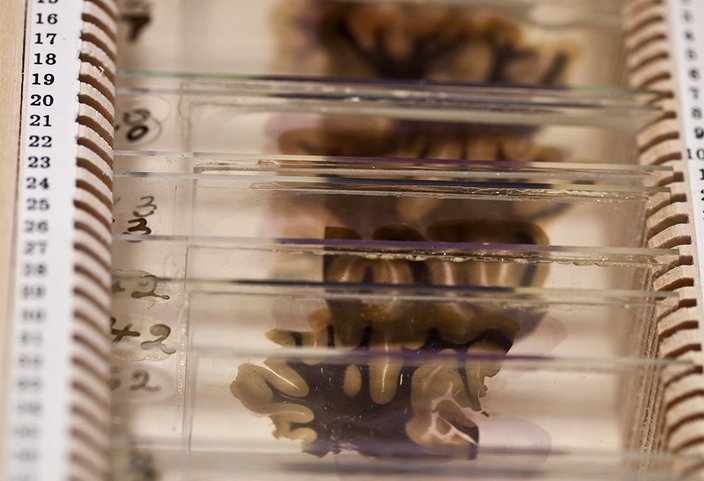 The slides of Einstein's brain were studied to determine whether the brain of a genius differs in structure from that of the average person. A 1985 experiment found that Einstein had more glial cells — those that support and maintain neuronal abilities — in a particular area of the brain when compared to a set of control males.

STUDYING THE BRAIN OF A GENIUS

The vast majority of slides shows parts of Einstein's motor cortex, but some depict slices of the spinal cord as well. The National Museum of Health and Medicine (NMHM), a Department of Defense museum in Maryland, possesses another box with nearly 350 slides, but only brings them out for the public occasionally. Dhody remains unaware of the whereabouts of the other three boxes.

The slides have also been studied to determine whether the brain of such a genius differs in structure from that of the average person. A 1985 experiment found that Einstein had more glial cells — those that support and maintain neuronal abilities — in a particular area of the brain when compared to a set of control males. Another study concluded that his prefrontal cortex had more neurons packed into a thinner layer of brain tissue than normal.

But such results explaining Einstein's superior intellect have been disputed. Hanoch Gutfreund, an Einstein scholar at the Hebrew University of Jerusalem, dismisses this line of research and states that every brain is different. As the academic director of the Einstein Archives, he pays more attention to the vast amount of output that this brain has produced in its lifetime, rather than the anatomy of the brain itself.

“His secretary at Princeton after his death lived on for 25 more years. In that time, she transformed a bundle of disordered documents — tens of thousands of them — into an ordered collection that was classified and categorized,” said Gutfreund. “And that collection has become the archives.”

Hebrew University's Einstein Archives contain an incredible 80,000 documents, including his most groundbreaking academic manuscripts, his Nobel Diploma, travel diaries and personal correspondence. The Einstein Legacy Project, spearheaded by the not-for-profit organization Canadian Friends of Hebrew University, includes the creation of The Einstein Archives, Research & Visitor Center in Jerusalem. The building will house the extensive collection of documents, along with a visitor center that celebrates the life and work of Einstein for the general public.

“Everybody knows that Einstein was a great scientist, maybe the greatest of all time. But Einstein was also an individual who expressed his views by writing on every issue that was on the agenda of mankind,” Gutfreund said. “No other university has these writings, and so we are working to share this treasure with the world.”