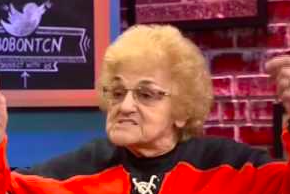 The NHL custom of tossing a cap onto the home ice to salute a hat trick took an odd turn Monday night after Brayden Schenn's third goal in the Flyers' 5-3 victory over the Calgary Flames. While many in the crowd lofted their hats onto the ice and celebrated amongst themselves, 80-year-old Anne Duggan, a diehard fan in the lower level, felt moved to toss her leopard-print bra over the glass.

Appearing this week for a tell-all interview with TCN's Breakfast on Broad crew, Duggan revealed that she's been waiting for the right occasion to throw her bra onto the ice for a while now.

"I carried [the bra] for three seasons," Duggan says, clarifying that Monday's garment was not the one she wore to the game. She then offers several risque anecdotes you wouldn't expect to hear from an octogenarian. When Sarah Baiker inquires about rumored plans for the next hat trick, Duggan doesn't hesitate to broadcast her intentions.

"I'm gonna throw a thong," she says. "I'm so proud, I have one I got in my seventies, all furry. I showed my husband, and he looks at it and says, 'You know it's got a hole in the front of it."

Duggan adds that her family – including a daughter who's recommended "granny panties" instead – thinks she's nuts. Sounds about right for a true Flyers fan. Watch the full interview below.