Ellen Tiberino – an artist in her own right

The daughter of West Philadelphia greats Ellen Powell and Joseph Tiberino, Ellen has carved her own fine niche in the art world 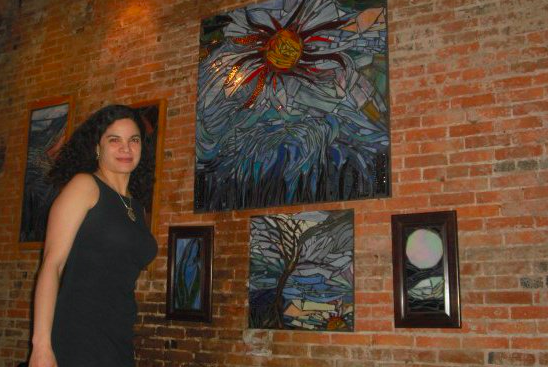 Ellen Tiberino with her art.

When the name “Tiberino” is spoken in Philadelphia art circles, there is an immediate sense of familial collectivism.

It is that which ties the often incendiary and spiritual socio-political paintings and murals of the mother and father (the late Ellen Powell Tiberino and Joseph Tiberino) to the work of their children. It should: Whether as siblings who hold the keys to their own Powelton Village museum or artists with their own individual aesthetics, Raphael, Gabriel and Ellen are proud Tiberinos. And each has had many of their own solo showings in the past, with Raphael emphasizing his talent in the comix field, and Gabe leaning towards a new form of mural-making.

Ellen Tiberino also spent time as a solo sculptor, mosaic-ist and stained glass artist. Yet, for the two years prior to her father’s passing in 2016, she took care of him while tending to much of the business of the Tiberino home complex and museum grounds.

“I was the night-duty nurse as he was deteriorating from his illness; a stressful, painful and time-consuming process,” said Ellen Tiberino of losing her father.

“Of course, I could not focus on myself or my art.”

Recently, however, Ellen has moved out of the museum complex – on good terms with her siblings – into the affordable housing 4050 Apartments Live-Work Spaces on Haverford Avenue to commit herself purely to her craft. Starting tonight, with a free event at the Neighborhood Time Exchange (a collaboration of People’s Emergency Center Community Development Corporation and Mural Arts Philadelphia) Tiberino will be the first featured for Artist’s Talk of the residency program.

“This residency is a time to spotlight me and my heart and my journey as an artist and individual,” said Tiberino.

Along with showing off a retrospective of her work in glass mosaic, Tiberino will reveal more about her inspirations (beyond that of her parents) than even before. She's doing as such in accordance with the Neighborhood Time Exchange artist’s residency program that provides West Philadelphia artists with five-month residencies. They include free studio space, monthly stipends, and basic tools and supplies.

She will also discuss the neighborhoods of Belmont, Mantua, Mill Creek, Saunders Park, and West Powelton, where she was raised.

In a world that’s constantly beating you up and tearing you down, I keep his words in my head like a mantra.”

“Being an artist means giving back to the community. My parents were very big on community involvement – so a large element of my residency will be an intergenerational art class I will instruct weekly with children and elders from the West Philadelphia community.”

Ellen Tiberino says that it is not an easy question to answer when it comes to considering the influence of her parents on her own work and life. From her mother, she learned how to be a strong woman, and to dare to be different – “To be an individual in a world full of sheep.”

From her father, she learned to be confident in her own skin.

“He used to say to me constantly, ‘Ellen – do you know what’s wrong with you? Absolutely nothing.’ In a world that’s constantly beating you up and tearing you down, I keep his words in my head like a mantra.”

She forged an art form from stained glass and mosaics that would allow her to show off her political outlook as a staunch environmentalist and anti-fracking activist.

“It is your duty as a citizen and as a human being to speak out against injustice,” she said. 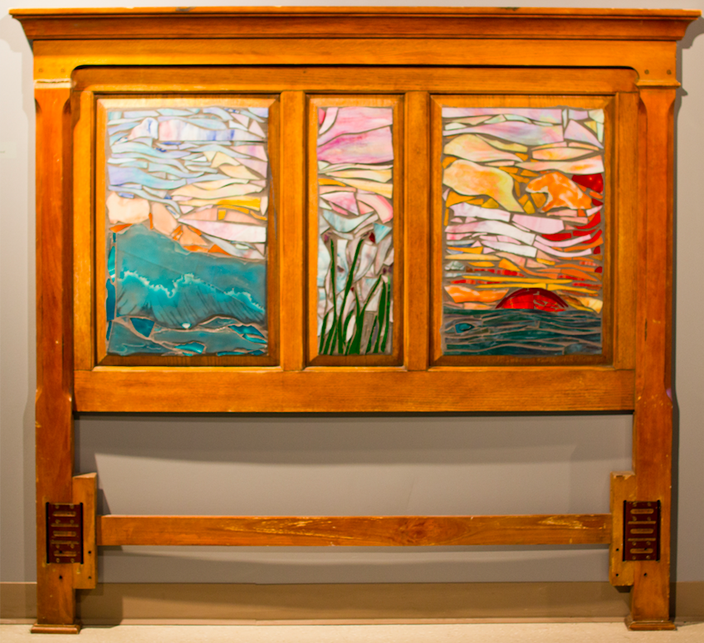 For example, her “Water is Life” piece came before the protest against the Keystone XL pipeline and depicts the beauty and necessity of water in nature amidst the policies geared to destroy tranquility.

Ellen Tiberino’s greatest focus, however, was to craft an art form that would allow her to be her own woman and her own Tiberino.

“Growing up and being my mother’s name sake, I was constantly compared to her,” she said.

“That was sometimes rough. But I picked my medium – or should I say it picked me – because it is entirely different from the traditional mediums of my family. No one can claim that I’m riding the coattails of my family. It is entirely my own and I’m quite proud of that.”