The actress laughed off the late night show host's antics, but many viewers felt he distracted from her accomplishments 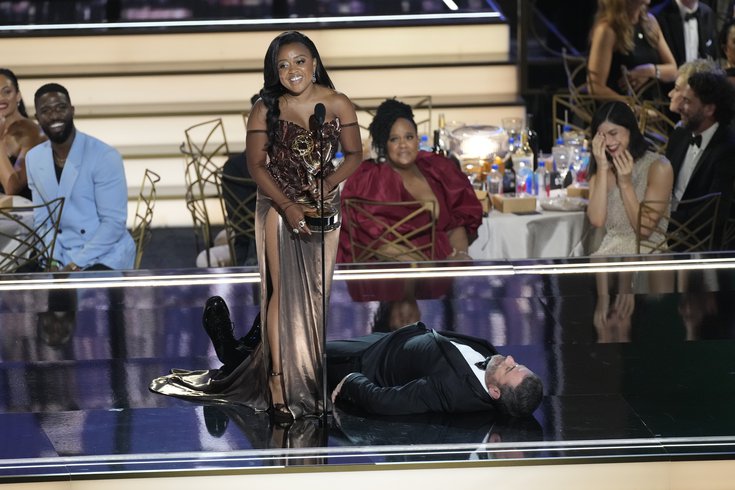 'Abbott Elementary' creator Quinta Brunson delivers an acceptance speech at the Emmy Awards while late night host Jimmy Kimmel lies on the floor as part of a comedy sketch.

But late night host Jimmy Kimmel was criticized for diverting attention from the accomplishments of Quinta Brunson, who accepted the Emmy for outstanding writing for a comedy series.

Brunson, 32, was the first Black woman to receive three comedy nominations in the same year and the youngest ever nominated for a comedy acting award. She plays the show's main character, Janine Teagues, an optimistic second grade teacher.

The show's pilot episode, which Brunson wrote, earned her the Emmy for outstanding comedy writing. While Brunson accepted the trophy, Kimmel continued a joke in which he pretended to be passed out. Brunson was forced to step over him to give her speech.

On social media, many accused Kimmel of embodying white privilege. But Brunson said she didn't mind the skit.

"Tomorrow maybe I'll be mad at him," she told reporters backstage. "I'm going to be on his show on Wednesday, so I might punch him in the face. I don't know what happens."

She added that Kimmel is a "comedy godfather" and that she was happy he presented her award.

Quinta Brunson addressed Jimmy Kimmel laying on stage during her #Emmys acceptance speech: "I felt like the bit didn’t bother me that much...Tomorrow maybe I’ll be mad at him. I’m going to be on his show on Wednesday, so I might punch him in the face." https://t.co/Bm8Bfhyi0k pic.twitter.com/cMDuZbq0AQ

In the outstanding lead actress in a comedy category, Brunson lost to Jean Smart, of "Hacks." And the Emmy for outstanding comedy series went to "Ted Lasso."

After more than 40 years in the industry, this was Ralph's first Emmy. Ralph, who is married to Pennsylvania Sen. Vincent Hughes, began her speech by singing "Endangered Species" by Dianne Reeves, a song about being strong and staying true to yourself.

Brunson and Ralph were the second Black women in Emmy history to win their respective awards. Lena Waithe won an Emmy for outstanding comedy writing alongside Aziz Ansari for their work on Netflix's "Master of None" in 2017. Jackée Harry won the outstanding supporting actress in a comedy series for her role in 1987's "227."

There was only one Philly award winner without ties to "Abbott Elementary."

West Philadelphia native Colman Domingo won the outstanding guest actor in a drama series award for his performance on the HBO show "Euphoria."

Zendaya, another Black actress, won the award for outstanding lead actress in a drama for her role on the show.

Here are the winners and nominees for the major categories. A full list of winners can be found on the Emmy Awards' website.

Outstanding lead actor in a limited series or TV movie

Outstanding lead actress in a limited series or TV movie

Outstanding supporting actor in a limited series or TV movie

Outstanding supporting actress in a limited series or TV movie