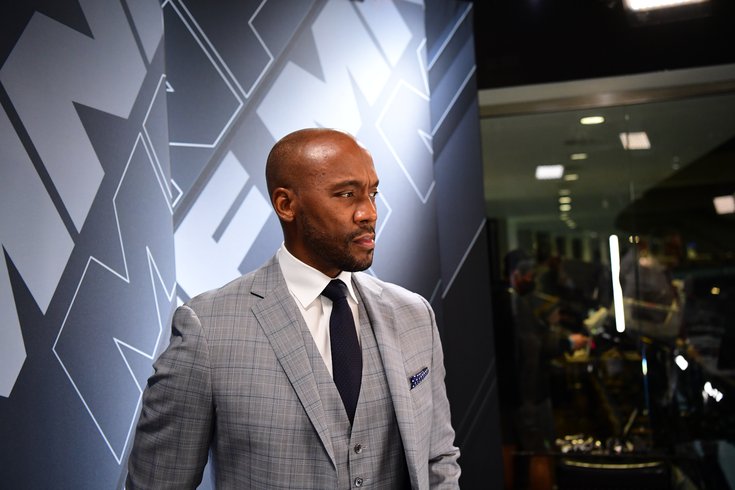 Louis Riddick has gone from Bucks County to the NFL to ESPN — is a GM job next?

The epiphany hit on the flight home from Seattle to Atlanta in 1999. Louis Riddick could feel the darkness on the fringes creep in as he spoke to his wife over the phone about a part of him that he was not ready to part with — the football playing part.

Seven years as an NFL safety were wearing on him. The 1987 Pennridge High School grad did not know how much more he could commit mentally to his passion — football. Riddick had his wife and two beautiful daughters. He had his degree in economics from Pitt. He had his intelligence and acumen for investment banking. He had endless possibilities for the next stage of his life.

What he couldn’t shake was his love for football. For about 18 months, Riddick did not do anything, other than raise his kids and play the stock market, until he got a call in 2001 about being a football scout, which opened the door to where he is today — as one of the most respected voices in football as an NFL analyst for ESPN.

Riddick, the Bucks County native who grew up a Dallas Cowboys fan, will be teamed tonight for the Seahawks-Eagles game in the broadcast booth with play-by-play voice Steve Levy and fellow analyst Brian Griese as a part of ESPN’s Monday Night Football crew.

When Riddick talks football, you tend to lean in and listen. He’s a “football guy.” And while he's currently using those talents on the television screen, he isn't ruling out a possible return to the NFL, this time as a general manager — if the right situation should present itself.

Riddick began playing the game when he was seven, and excelled at Pennridge, where he was a USA TODAY and Parade Magazine All-American. He filled idle time reading about and studying football. From a young age, he would tell teachers he would play pro football, because that’s what his family did.

“I always knew growing up in some way, shape or form, I would be connected to football,” said Riddick, whose cousins are Tim and Will Lewis, two Pennridge standouts of the 1970s (Tim was the 11th-overall pick in the 1983 draft by the Green Bay Packers). “But here’s the irony, I hated the Eagles as a kid. My cousin Tim went to Pitt, so I grew up a Pitt fan, a Tony Dorsett fan and a Cowboys’ fan.

“Everything I did as a kid was geared to being a professional football player. I realized after I left the game that I was a lifer. I had to come back. I love the game, and I love being around the game and it’s something I committed to do my whole life. I didn’t want to sit behind a desk and trade stock on Wall Street. I’ve been going to pro games since elementary school.”

But his position with ESPN came by happenstance.

Riddick, now 51, did not have his contract renewed by the Eagles in the spring of 2013. He was at a what-to-do-next crossroads. His cousin, Will, had just accepted a job as the director of pro scouting with the Kansas City Chiefs under general manager John Dorsey.

ESPN was beginning a new show called NFL Front Office Insider. The network did not want analysts that were former players. They wanted front office people. They asked Will to audition. Since Will just took the job with the Chiefs, he suggested they talk to someone who would be better than him — Riddick.

He nailed the audition.

There were two seminal moments in Riddick’s TV growth. The first came when Sal Paolantonio, who hosted NFL Front Office Insider, turned to Riddick after the first commercial break of the initial show and asked, “Are you being dead serious that you never done TV before? You come across like someone who’s been doing this for a long time.”

“I remember going back to my hotel room after that show and I called my wife to tell her that it turned out really well,” Riddick recalled. “The second big moment for me came at the 2015 NFL Draft in Chicago. Ray Lewis was supposed to be there, but when the Baltimore riots broke out, Ray went back to Baltimore and they needed someone to replace him.

“I was heading to Chicago anyway to do the draft for radio. When Ray left, because he felt he needed to be in Baltimore, I didn’t think anything of it. John Wildhack (then-ESPN executive vice president, programming and production) called me the night before the draft that I would be doing TV to replace Ray.

“When we started the draft that night, within the first 20 minutes, I looked down at my phone and I probably had about 75 to 90 text messages from co-workers, friends, family and former coaches. I thought I was either doing really bad, or I was doing really well. It turned out really positive. I remember going back to my hotel room in Chicago that night thinking, ‘Here we go.’ That’s when it took off in my mind that I can do this.” 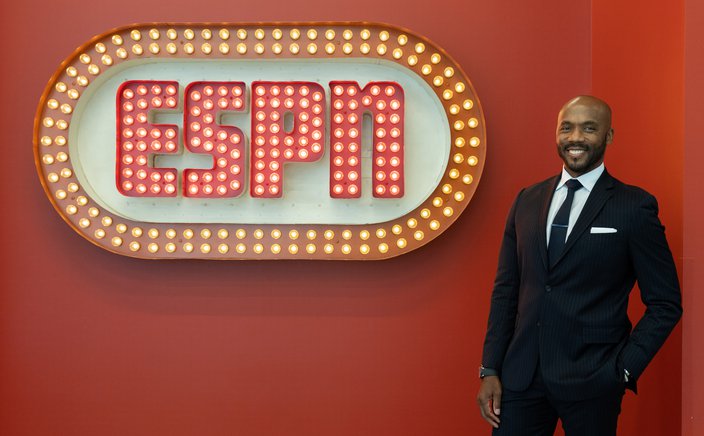 Riddick has since established himself as one of the go-to NFL analysts today. He does his own homework. He makes his own calls. He takes his own notes. No one hands him sheets of prepared material, as some NFL talking heads have. Former NFL analyst and local guy Mike Mayock parlayed his superior football insight into becoming the general manager of the Las Vegas Raiders.

Would Riddick be open to becoming an NFL general manager if the opportunity arose?

“Absolutely, and ESPN knows that,” Riddick said without hesitation. “They know I’ve interviewed with a few places in the past three, four years. I have talked to teams. Based on how things work in the NFL, knowing how things work with front offices and ownership support, being able to pick a coach and being compatible, and how it needs to be a big, well-oiled machine moving down the tracks with no different agendas, every place is not created equal.

I know there are only 32 general manager jobs in the world. They aren’t all created equal. That’s a fact. If you’re not able to select the kind of people that you trust and want to be around — and they can have all the ego in the world — when people have different agendas, that’s when things become a problem.

What happens is the extreme circumstance show you a lot about people... In a team sport like football, you get a lot of sniping and back-stabbing, and I won’t have that ever happen again in my life.

“I’ve been around too much of that. And I will never, ever, ever, ever, ever put myself in that position again. I would think about a place where everyone is pushing in the same direction and people are confident and competent, where no one is trying to back-stab anyone else, and trying to get the ear of the owner and the coach, always working a different angle, instead of winning football games. If I can control that and make sure that there isn’t any of that stuff, I would love the opportunity to do it again.

“It needs to be that situation where you can control your own destiny and have the support of people who understand just how hard it is to win in the NFL. If there was more of an understanding of that, there wouldn’t be the kind of turnover that there is today. There is a reason why coaches are being hired and fired and an alarming clip — and that goes back to the selection and hiring process in the first place. It’s flawed.

“What happens is the extreme circumstance show you a lot about people. When you’re winning, people want credit. It’s about people that run around saying, ‘It’s me, it’s me.’ When everything goes bad, they point fingers, ‘It’s him, it’s him; it’s not me.’ In a team sport like football, you get a lot of sniping and back-stabbing, and I won’t have that ever happen again in my life. If I have the chance, where I can set up with people I know and I trust to do it the right way, I’m 100-percent interested in a situation like that.”

Riddick did stress that he holds one of the most iconic positions in sports broadcasting. He’s set. He’s not openly seeking a position, but he would be willing to listen. He is a football guy. It’s been his whole life. He loves the smell of the grass and being around the locker room, the exhilaration of a big victory.

As for the deterioration of the Eagles, Riddick saw it coming. The team’s foundation has eroded in its inability to draft and develop at a high level since Andy Reid left. The Eagles biggest contributions have come from outside acquisitions, other than the drafting of Brandon Graham, Fletcher Cox, Lane Johnson, Jason Kelce and Zach Ertz.

“You look at the most impactful players that were homegrown, like Lane, Brandon, Jason, Fletcher and Zach, with the chance that Dallas Goedert and Miles Sanders will be good players, but what has happened is those hits have come fewer and farther between,” Riddick said. “And now you have a quarterback who has lost his way. He’s lost his confidence, and he’s lost his consistency. You see it in flashes, but it’s going to take some time for him to get that back.

Who knows, maybe the architect of the next Super Bowl champion Philadelphia Eagles will be a homegrown football guy who was once a Dallas Cowboys fan?