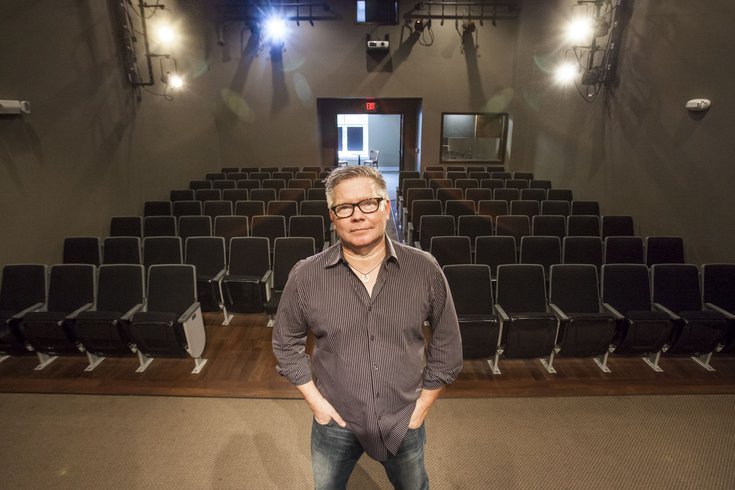 Joe Paprzycki, who founded the South Camden Theater Company 15 years ago and built a viable performance venue on a parcel where his grandfather once owned a bar, was ousted by his board of directors earlier this week. The board has not publicly explained it action.

The board of a tiny professional theater company in a struggling Camden neighborhood has voted – 11 to 3 – to remove it’s unpaid producing artistic director, Joe Paprzycki.

The move means severing ties with the man who founded and was the guiding force behind the scrappy South Camden Theatre Company for 15 years.

Paprzycki is in many ways synonymous with the 99-seat Actor’s Equity jewel box on Jasper Street. It’s a rehabilitated neighborhood near Sacred Heart Roman Catholic Church, surrounded by a sea of blight.

Paprzycki held his first staged reading of one of his own plays – he’s also a playwright – to raise seed money for his passion project, rehabbing a derelict building into a professional theater.

The building was rehabbed by Heart of Camden, a development agency active in South Camden that's affiliated with the church.

Paprzycki’s grandfather once ran a corner bar at the location where the theater was created. The upstairs apartment above the bar was his mother’s first home.

“It makes me incredibly sad,” Paprzycki said Thursday. He’s been locked out of the theater, his digital access also denied. An email informed him of the board’s action, he said.

His husband, Gus Orr, who volunteered by doing public relations, has likewise been denied digital access and not contacted regarding his role, he added.

The theater found its niche in Philly's small-theater world by annually showcasing his own work, as well as staging obscure plays by masters of the theater, such as Tennessee Williams.

It has also provided space for talk-back performances by young playwrights such as Nicole Pandolfo, who grew up in South Jersey, and old theater hands, such as Philadelphia’s Albert Innaurato.

The vote to remove Paprzycki came at a special meeting of the nonprofit’s board of directors earlier this week.

The board’s president Robert A. Bingaman declined to comment Thursday, saying a statement was being prepared to explain the board’s actions on Tuesday night. Bingaman acknowledged that not commenting now meant news accounts would tell just one side of the story.

The theater company posted this statement on its Facebook page after removing its founder:

"The South Camden Theatre Company would like to thank Joe Paprzycki for his years of service as the Producing Artistic Director of the theatre company.

“As we move forward we would like to ask our patrons, advertisers and sponsors for their continued support as we go through this period of transition. We will continue to work hard to earn your trust as we plan for our new 2016/2017 Season. Theatre is alive and well in Camden."

Paprzycki said he first felt concerned when the board added a new member in October without talking to him.

His concern accelerated with plans to add events and double fees at theater fundraisers, then being told he would need board approval to stage his own plays or to personally direct any plays.

He also said Bingaman “told me flat out” he hated several of the plays in last season’s lineup.

Paprzycki said he made changes at the board’s request, pulling one of his own plays and adding a lighter play to the planned season, "and even despite making changes, they fired the founding producer-director.”

Paprzycki, the subject of a just-completed documentary on the theater, said he’s been gratified by the outpouring of support he’s gotten and has no immediate plans beyond writing.