Here's how the Philadelphia Eagles can make the NFL playoffs 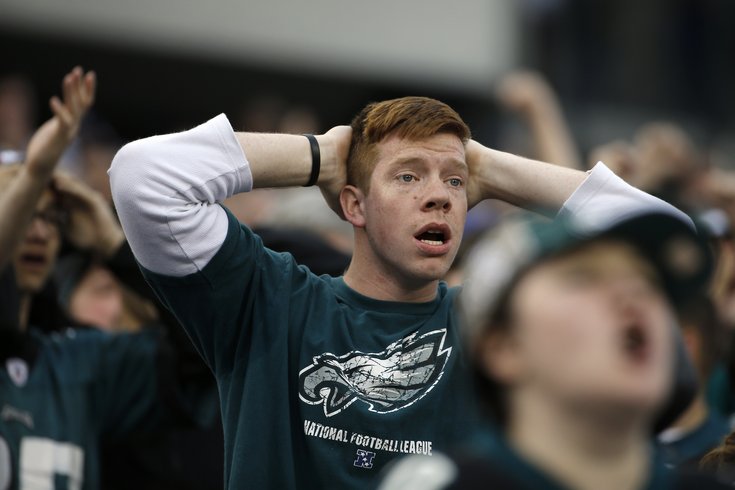 Will Philadelphia Eagles fans be able to endure a playoff run from their team?

Because there's been so much mediocrity in the NFL this season, the playoff picture is far from sorted with just three weeks remaining. So far, only three teams have clinched playoff births (Arizona, Carolina, New England) and the races for the remaining spots are more than a little crowded.

In the NFC alone, 14 of the 16 teams are still in the playoff hunt. And because the NFC East is such a mess, even the 4-9 Dallas Cowboys still have a chance of not only making the playoffs but also hosting a first-round game.

That scenario would involve a four-way tie for the NFC East (with Dallas winning based on divisional record) and thanks to SB Nation here's how it could happen:

After see how things have played out in the NFC East so far this season, the above scenario seems like the perfect conclusion to a borderline embarrassing season for the division.

With that being said, the playoffs are still a very real possibility for the Eagles, who improved to 6-7 following Sunday's win over the Bills. Before getting into the multitude of ways in which they can win the division, let's take a look at the NFC East standings, as well as the remaining schedule for all four teams.

Unless the crazy four-way tie happens, the Cowboys are essentially out of the playoffs. So for the purposes of this exercise, we're going to leave them here.

Another thing worth paying attention to are the tiebreakers. Here's a look at how they currently impact the race for the NFC East, via CBSSports.com:

[For more on all the tiebreakers -- there are a lot of them -- this breakdown from CBSSports.com is extremely helpful.]

As for the wild card race, it's not even worth paying attention to for these teams at this point. The number of wins they would need to secure one of those spots would likely guarantee them the division title instead. Plus, they would need a lot of help from a lot of other teams.

For now, let's just focus on what it would take to win the NFC East:

IF THE EAGLES WIN OUT (3-0) they will make the playoffs. That’s because two of their final three games come against the teams with which they are competing for the NFC East crown. It’s also why, despite Washington currently holding the tiebreaker, they currently control their own fate.

But if the Eagles don’t win all their games, things become exponentially more complicated with each loss. The good news is, at least we know where they stand on the extremes. Win all three, and they’re in; lose all three, and they’re out. It’s the in between areas where there’s Beautiful Mind-esque latticework of possible scenarios. Or maybe it’s just that math was never my strong suit.

IF THE EAGLES GO 2-1, they actually still have a halfway decent shot of making it to the postseason. In fact, there’s still a potential scenario in which the Eagles could lose a game and still be guaranteed a playoff spot. It’s just all about which games they win — or, more accurately, which one they lose.

A loss to the 11-2 Cardinals this weekend would not be the worst thing for the Eagles, at least in terms of where they sit in the standings. Here’s a look at how it would need to unfold for the Eagles to still make the playoffs if the do indeed lose one of their final three games.

• Beat ARI and WAS, then lose to NYG
— NYG would have to lose to either CAR or MIN

• Beat ARI and NYG, but lose to WAS next week
— WAS would have to lose to BUF and DAL

• Lose to ARI, then beat WAS and NYG
— Eagles would make playoffs (no matter what NYG and WAS do)

Because wins over New York and Washington would guarantee that those teams also finish, at best, 2-1 (8-8 overall) — and the Eagles hold the tiebreaker — a loss on Sunday night to Arizona would hardly spell the end of their season.

What it would mean, however, is that their ensuing matchup with Washington, the final game of the year at The Linc, will be played with the Eagles season in the balance.

IF THE EAGLES GO 1-2, their lone win must come against Washington in Week 16 in order for them to make the playoffs. And even if they do that, they still need a lot to happen in order to make it.

If they go 1-2 and lose to Washington, they’ll be eliminated. Even if Kirk Cousins and Co. lose their other two games, they’d still finish tied at 7-9, with Washington holding the tiebreaker after going 2-0 (in this scenario) against the Birds.

Of course, there's always a chance the Eagles lose their final three games. But for now, the NFC East title is theirs for the taking.