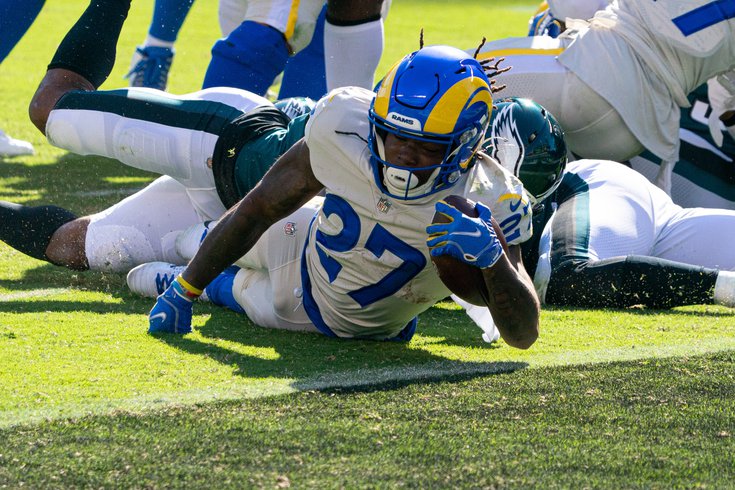 Darrell Henderson should be targeted in all fantasy leagues this week.

Making waiver wire claims is a risk, and sometimes a depressing drag, but if you want to win your fantasy league, you need to look at it like an opportunity.

Knowing how much of your free agent budget (if you have one) to spend on a player is half the battle. The other half is knowing who to target.

There are almost half a dozen players worthy of a substantial (FAAB) investment, as there will be at least four new running backs in Week 3 thanks to serious injuries to Saquon Barkley, Christian McCaffery, Cam Akers and Raheem Mostert/Tevin Coleman. Owners of those players should probably bid pretty high on one of the replacements this week.

Here's a look at one of our favorites to try and seize at each fantasy position this week:

Poor Tyrod Taylor. Not only did the Chargers starting quarterback have to go to the hospital after experiencing chest pains Sunday (he is reportedly fine after the incident), he probably lost his starting job. Again. Like he did in Buffalo. And in Cleveland.

Their rookie QB Herbert was thrust into action and he responded like a legit top prospect, throwing for over 300 yards and nearly leading the Chargers to an upset win over the Super Bowl champion Chiefs. It would be hard to imaging L.A. making a move back to Taylor (though Chargers skipper Anthony Lynn has not handed over the keys just yet), as the future of their franchise seems to have emerged a bit ahead of schedule. Herbert may not be a smart start every single week, but he is more than worthy of a roster spot somewhere. He will eventually become very fantasy start-able — perhaps ahead of schedule again.

We're picking Henderson over the other new starters because he showed us the most on the field in prior weeks. Against the beat-up Eagles defense last week, Henderson helped L.A. run for 191 yards with 80 yards and a touchdown of his own, plus 40 yards receiving on two receptions.

It would be almost just as smart to go hard after Jerrick McKinnon in San Francisco or Dion Lewis (or Wayne Gallman) in New York. As far as Mike Davis goes, the replacement for McCaffery in Carolina, there is just as much opportunity, but as soon as McCaffery returns, Davis becomes obsolete. Either way, this is the biggest running back opportunity in a long time and any bid under $20 will likely come up empty for all of them.

It's hard to continue ignoring Cole, Gardner Minshew's second option in Jacksonville. He's caught one touchdown each week, and has 11 catches for 105 yards on 13 targets so far this season. The Jags' offense seems to be a pretty solid source of production each week, and there is no shame in cashing in on their successes.

Cole could have another big week in Week 3, as the Jaguars face the Dolphins Thursday night. He's worth grabbing as a wideout option and perhaps even a start this week if you have the roster space.

In Dallas' ridiculous comeback win in Week 2, Schultz caught 10 passes on 11 targets including one for a touchdown. Maybe Dac Prescott has finally found a tight end he likes?

In the wake of Blake Jarwin's season-ending injury, Schultz appears to have done more than enough to show the starting job is now his in Big D. With so few reliable tight ends available in fantasy, Schultz is certainly worth a try.

Defense to stream: Colts vs. Jets

The Jets are really, really bad. Whoever plays them, that team should be started by someone in your fantasy league.