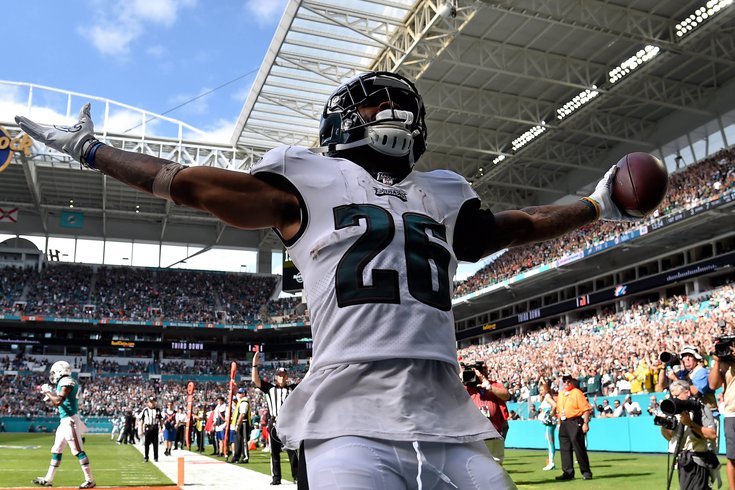 Now that we're more than a week into Philadelphia Eagles training camp, we'll take a look at where the fantasy football experts have Eagles players rated, using a consensus of 114 experts, rounded up at FantasyPros.com, and determine if you should buy or sell each player based on what we know about the team and what we have seen so far in camp. (We'll use their PPR rankings.)

• Miles Sanders (8th RB, 12th overall): Don't worry about Sanders' training camp injury setback. He should be ready for the start of the regular season, and he is primed for a big year. The Eagles have emphatically said that Sanders will carry the load for Eagles, and if you look at his 2019, that's exactly what he did down the stretch.

If you look at Sanders' four December games (minus the Week 17 game in which he got hurt), he had 329 rushing yards, 173 receiving yards on 20 catches, and 4 TDs. Extrapolate that over a 16-game season, and he's a 2,000-yard, 80-catch, 16 TD guy. To be clear, nobody here is predicting those kinds of numbers for Sanders, but I do think that final month of the season shows his enormous potential.

Verdict: Buy. Sanders should be a top 10 pick in every draft.

• Zach Ertz (4th TE, 39th overall): Ertz is probably a boring fantasy football pick at this stage of his career, in that there's no mystery about what he is. He's going to lead the Eagles with 80-120 catches, 800-1,100 receiving yards, and 5-9 TDs. I might quibble a bit with Mark Andrews going higher than Ertz in drafts, but I think that 39th overall is about right.

• Carson Wentz (9th QB, 84th overall): In 2019, Wentz had 4,000+ passing yards and 27 TDs with no wide receivers eclipsing 500 receiving yards. That's nuts. Still, taking him higher than where he's currently slotted (QB9) is a slight risk, because you have to bet on his health and the health of guys like DeSean Jackson. I believe it's worth the bet, as he has top 3 potential, should everyone stay healthy. Just be sure to get a second competent QB.

• Jalen Reagor (51st WR, 124th overall): He's going to start, and the Eagles are going to get him involved in the offense early and often. The perception of Reagor is that he's a deep threat (and he certainly is), but he's also a YAC guy. The Eagles have thrown a ton of quick passes to him, in attempts to get the ball in his hands and let him get yards after the catch. Think DJ Moore. Obviously from a fantasy football perspective, if they continue that approach in games, that's going to boost his catch totals.

• Dallas Goedert (16th TE, 128th overall): In 2019, Goedert played almost the entirety of the season through a painful calf injury, and still caught 58 passes for 607 yards and 5 TDs. After Ertz took a vicious hit in the Eagles' biggest game of the season against Dallas Week 16, Goedert became Wentz's go-to receiver, catching 9 passes on 12 targets for 91 yards and a TD. On the season, Goedert's snap counts were up to 66 percent from 48 percent in 2018. I would project a modest rise in snap counts and production in 2020, which to me should put him in the 10-15 range at TE.

Don't worry about his TE2 status on the Eagles. He's going to get plenty of opportunities to put up numbers.

• Boston Scott (51st RB, 144th overall): Scott was the "No. 2 back" down the stretch last season, but that was only because Sanders went down, and Jordan Howard was already hurt. Scott will get some receptions as a complementary back, but he's not going to get a lot of snaps if Sanders stays healthy, and it's not as if he's going to carry the load for the team should Sanders go down. He'll still be a complementary piece to someone like Corey Clement or (fill in Eagles future RB acquisition).

• DeSean Jackson (62nd WR, 160th overall): Lol, WR62?!? Are you kidding me? I mean, I get that Jackson is injury-prone, but when he's healthy he's still the type of player who can win a week for you on his own with a couple TD bombs, like he had in his only healthy game last season.

Jackson had instant chemisty in training camp with Wentz from Day 1 in camp last year, which showed Week 1 against Washington, and has carried over into 2020 camp.

• Alshon Jeffery (67th WR, 178th overall): Are people actually drafting Alshon Jeffery? He's almost certain to start the season on PUP, and if the Eagles' offense is humming by the time he comes back, are they going to go out of their way to shoehorn him back into the offense.

Verdict: Undraftable. Maybe keep an eye on the Eagles' offense the first month of the season to see if they're struggling, and keep Jeffery on your FA pickup watch list. But there's no need to carry him for an undetermined amount of time in the hopes he'll rejoin the team and put up starting WR numbers.

• Philadelphia defense (12th D/ST, 214th overall): I do think there are reasons to be bullish on Philly's defense, from a fantasy perspective:

Verdict: Still, 12th is about right.