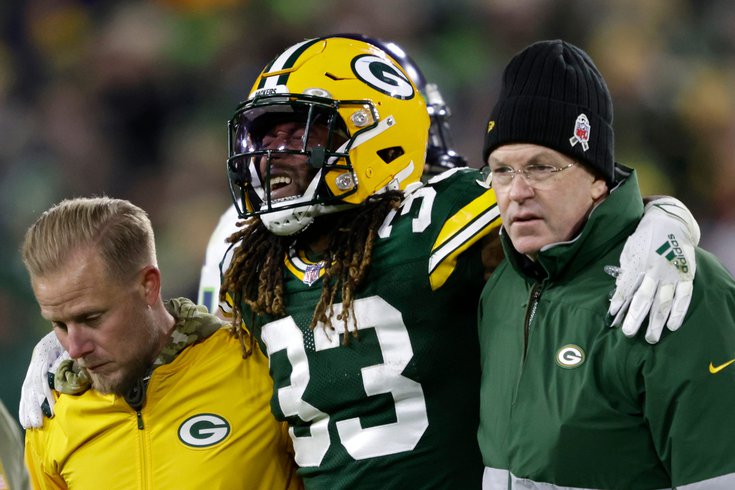 There were not a ton of significant fantasy-relevant injuries in Week 10, which is nice — but Aaron Jones owners are certainly not happy.

Aside from the Packers star running back, a few minor setbacks to players like Dallas Goedert and Baker Mayfield lead the injury report from the week that was. We've also included some updates on players working toward a return in Week 11, like Alvin Kamara, Saquon Barkley and Kyler Murray.

The Packers have not had an easy go of it lately, and even though they escaped an ugly game against the Seahawks with a win Sunday afternoon, their star running back Jones has an MCL sprain, an injury that will not force him to miss the rest of the season.

#Packers RB Aaron Jones was found to have a mild MCL sprain after his MRI, source said, which mean he’s out 1-2 weeks. Relatively good news overall.

In his stead, backup A.J. Dillion got the lion's share of work and will immediately become a fantasy starting option next week.

Why Dallas was still trotting Lamb out there when the Cowboys had absolutely decimated the Falcons and had the win locked up is anyone's guess, but the wide receiver wound up leaving with a bruised arm. Whether the injury is bad enough to actually force him to miss meaningful action will come into view over the next few days.

The Birds' stud tight end left their win Sunday early with a concussion and did not return. He'll work his way through the NFL's protocols this week. There really is no playable Eagles option at tight end if he does not play in Week 11.

Patterson has been a breakout player on a team lacking too many of those in Atlanta this season, but he may miss a week or two with an ankle injury. Will the setback finally make Mike Davis a serviceable fantasy player to place in your lineup? We'll have to see, but he could be worth a start in Week 11.

Poor Mayfield can't seem to get a break this season as he continues to get bruised and battered. An injury in Week 10 knocked him out of the game but his knee injury appears to have no structural damage. Will he bounce back for next week or will Case Keenum be the starter? Follow Cleveland's practices to see this week.

A hip injury was the ailment for the Washington tight end Sunday, who could have a questionable status heading into next week.

Jefferson isn't the most fantasy relevant RB, but he scored a touchdown this past week and could be on the radar for desperate owners next week. However, he left the game with a hurt ankle in the team's tie against Pittsburgh and will have an up-in-the-air status going forward.

The Fins have a bit of a QB controversy going on, in that they really don't have a bonafide QB1, though coach Brian Flores says Tagovailoa is the top QB. He may or may not be full go in Week 11 as he continues to deal with a finger injury. Brissett suffered a minor knee injury on Thursday night, but did not return from it even though he could have. All of this is to say, keep a watch on who winds up starting next week as it is still up in the air.

Arguably the two best players on Arizona's roster missed Sunday's game in Week 10 with lingering injuries, and with the Panthers their opponent the team decided to err on the side of caution — and of course they were blown out in a loss. Both will probably need to practice at least a little this week to have any confidence in playing from fantasy owners. Neither has been added to IR, so a return after two weeks out makes sense.

The Saints relied on a retread of Mark Ingram with Kamara surprisingly out with knee soreness in Week 10, and it is yet unclear if we'll get a repeat of that in Week 11 when they face the Eagles. The Kamara injury is not believed to be serious but it could linger, which is a reason for concern from fantasy owners who should keep an eye on the situation.

Barkley was seen working out on the sidelines of practice last week, and he definitely benefited from the Giants bye week this past weekend. He also may have a little more motivation to return with his backup Devontae Booker dealing with his own injury issues. Barkley has a very good chance of being back for Week 11 and those who drafted him should feel some optimism.

One more piece of Dolphin injury news, as Fuller appears to be on track to return from IR and play in Week 11.