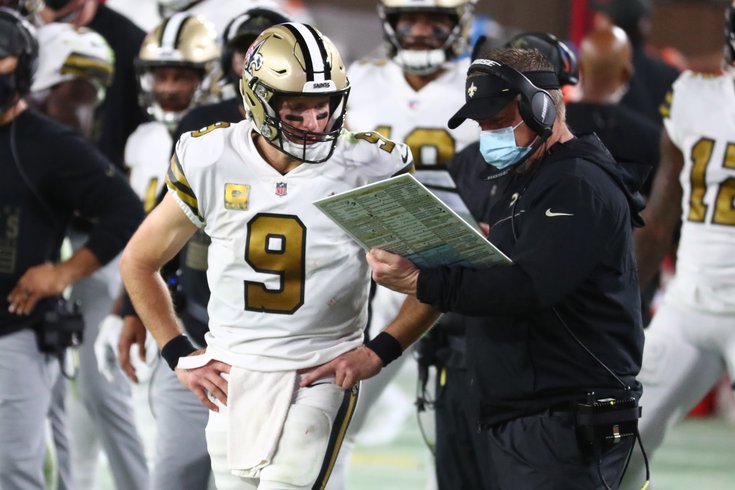 The era of losing top skill players to injury seems to have passed us by, and is being replaced by starting quarterbacks getting injured.

In Week 10 action, three key signal-callers exited with injuries, and potential games missed by the three players we'll dig into below could have a trickle down effect in scheme and production for their teams and on fantasy owners across the land.

Here's a brief look into the latest on fantasy relevant players who got injured in Week 10:

For the second time in two seasons, Drew Brees could miss some time with an injury. The 41-year-old vet missed the entire second half of Sunday's game, with Jameis Winston taking over and completing 6-of-10 passes in his absence. An apparent rib injury looks to be somewhat serious and threatens to cost Brees at least Week 11.

"He took a heavy shot in the first half. As he came out in the second half, he felt it was really impacting him," Payton told reporters. "So, specifically, he'll get an MRI and X-Rays. His back felt sore. As he tried to throw, he just came up to me and said, 'Hey, I don't feel like I'm capable of playing.' And so, quickly, we made the switch and, you know, that happens sometimes.

"He felt strong enough about letting me know and I know when he does that, which is probably gonna be the first time in 15 years, that it was significant enough where he felt like he couldn't function in the second half."

If there is one thing fantasy owners can takeaway from the injury it's that the run game, and mainly Alvin Kamara, stands to benefit most from a potential Brees absence.

UPDATE [2:45 p.m.] — It looks like Brees will, indeed miss what could be some serious time, according to reports.

Source: Results of medical evaluations performed today on #Saints quarterback Drew Brees revealed that he has multiple rib fractures on both sides of his chest and a collapsed lung on the right side. Injuries suffered over two weeks. It is uncertain how much time he might miss.

The Panthers starting QB went down with a knee injury and it doesn't appear to be that serious — though he could miss a game or two. Bridgewater hurt his left knee, which is good news because it's the opposite side of his previously surgically repaired one. Initial reports are that the setback will be minor, pending an MRI which will happen Monday. If Bridgewater is unable to play next week, XFL standout P.J. Walker will likely be the Week 11 starter.

Teddy Bridgewater with good news from MRI, per source: No structural damage. Some soreness. Some swelling. Status uncertain for this week but positive vibe for @Panthers QB.

Stafford had a pretty big day in Week 10, throwing for 276 yards and three touchdowns, so you can be forgiven for having no idea that he had an injured thumb — but reportedly he did. An X-ray Monday will determine whether he will need to step back due to pain in his right hand. It stands to reason that David Blough is the next man up (he, or Chase Daniel).

The musical chairs game the Niners have played this season with their running backs continues to get more and more ridiculous as a pair of injuries could mix things up yet again. Hasty had just three carries Sunday before hurting his shoulder. McKinnon was wholly ineffective as the workhorse, running the ball 18 times for just 33 yards. He reportedly had a "stinger" and his status going forward is unknown. With Raheem Mostert potentially returning next week, things could take a turn for the good for once — but Niners fans and fantasy owners will have to wait and see.

Another team that has had their running back room decimated is the Seahawks. With Chris Carson and Carlos Hyde both out with injuries already, Homer injured his hand against the Rams, leaving Alex Collins to emerge as the leading rusher in the game. There are a ton of question marks heading into Week 11 so keep an eye on things as next week approaches. We'll know more about who's worth picking up or starting as the days roll by.

The Bills saw Brown go down late in their heart-breaking loss to the Cardinals with an ankle injury. The extent of the injury is yet unknown but it wasn't serious enough that the veteran needed to be helped off the field. If he misses time, the value of Stefan Diggs will only go up. Cole Beasley, who had 100 yards against the Cardinals, is also a start-able option.

A fringe wideout play for fantasy owners all season, Amendola hurt his hip after making a few catches in Week 10. His status for next week is up in the air pending news on his new injury.

With Brees already hurt, the Saints passing game took a second hit with Smith having a concussion and missing significant time in Week 10. He will be in the NFL's protocol this week.

An ankle injury made the L.A. kicker's status questionable Sunday. A leg injury is never a good thing for a kicker, and the Rams may be working out some new kickers this week.