John McMullen: Eagles' lack of situational awareness did them in against Giants 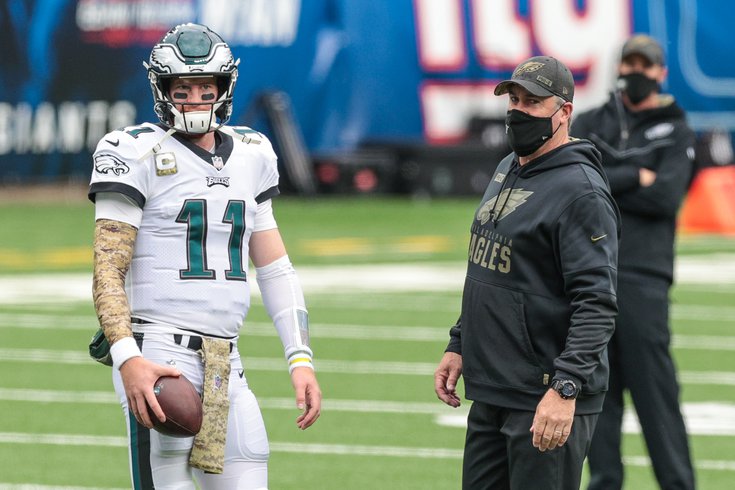 Doug Pederson may have had his worst game in a while in Sunday's loss to New York.

When it takes over four years — 1,470 days to be exact — for a divisional opponent to beat another in the NFL, something hinky has to happen.

The New York Giants beat the Philadelphia Eagles in North Jersey on Sunday, 27-17, for the first time since Eli Manning threw four touchdowns — two to Odell Beckham Jr. — in a 28-23 triumph on Nov. 6, 2016.

Yep, Big Blue nearly went the entire Trump Administration without beating Philadelphia before finally doing it in apropos fashion, with none of their fans allowed anywhere near the billion-dollar television studio that is MetLife Stadium to see it.

So what went wrong for Philadelphia the first time in nine games during the series?

If you’re superstitious maybe you’ll say not enough Boston Scott for one.

The Eagles backup running back took a backseat to the returning Miles Sanders and the Giants breathed a sigh of relief until their Kryptonite broke off a career-long 56-yard touchdown run on the Eagles first possession of the third quarter.

It was one of only four touches for Scott, who was the NFC Offensive Player of the Week after scoring three TDs the last time the Eagles were at MetLife and is fresh off an 18-yard game-winning scoring reception from Carson Wentz to win the Oct. 22 game in the waning seconds at Lincoln Financial Field.

Of Scott's seven career TDs, six have come against the NYG, so when he crossed the goal line Sunday, if fans had been here you likely could have felt the air coming out of New York.

An ensuing two-point conversion turned a 14-3 game into a 14-11 one and the sparse population of workers and media members who were allowed into the police state that is New Jersey COVID restrictions looked toward the gray sky, not for rain that nearly killed many of us on the trip back mind you but for the other shoe dropping.

And those heads continued looking up and waiting right up until they weren’t.

Daniel Jones, who confounded the Philadelphia defense for the second time in three weeks with a host of zone-read runs, including a 34-yard TD of his own, went all "Danny Dimes" on Jim Schwartz's secondary, first a slot fade, which Sterling Shepard ran clinically against Avonte Maddox, and then a 50/50 ball where Golden Tate simply went over solid coverage by Nickell Robey-Coleman.

The two plays went for 27 and 38 yards and in short order, the Giants had extended their lead.

By the time it was over, the autopsy started with pouring over the gamebook for an explanation.

How in the world could the Eagles lose to the Giants. How did the three certainties of life get whittled down to two?

The answer was situational football, a staple of this Eagles organization, and something it has preached consistently in the Doug Pederson era. Yet Philadelphia managed to play 60 minutes of football Sunday without converting a third down, finishing 0-for-9.

After a longer than usual cooling-off period, "Angry Doug" showed at the podium, likely after peeling some paint off the walls in his locker room, hopefully behind a mask.

The minute Pederson started his post-game presser was the same minute he was looking for the door in the makeshift Zoom studio.

Except that wasn't the case, especially early.

The Eagles' first three third-down conversion attempts were 3rd-and-1, 3rd-and-3, and 3rd-and-1, situations where it is supposed to be — advantage offense, at least for offenses not playing with Sua Opeta and Matt Pryor at offensive guard.

“We just need to execute a little better in those situations,” Pederson said. “Honestly, I hate to keep using this phrase, but I’ve got to take a look at it and see. I can probably answer that question better tomorrow to see if there was any breakdown in execution or whatever it is. But you’re right, when you get in those situations, you need to convert.”

Wentz, meanwhile, knew it was bad on third down but didn’t know the Eagles pulled off the rare Blutarsky on the key down — zero point zero.

“I knew we struggled on third down, I didn’t realize we were that poor,” he said. “Anytime you’re 0-for-9 obviously you’re not doing something very well. And hats off to [the Giants], they had a good game plan. That’s a good defense over there, they made it hard on us, but we definitely made it tougher on ourselves, left some plays out there, didn’t execute enough.

“[An] 0-for-9 on third down is extremely frustrating and I think that something we pride ourselves on is staying on the field on third down and we didn’t do it today.”

Then came the real head-scratcher.

On 4th-and-10 from the Giants' 36-yard line with 4:56 left in the game and the Eagles trailing by a TD, it was do-or-die for Philadelphia.

And what was dialed up?

A back-shoulder fade to Jalen Reagor, a rookie receiver whose biggest weakness at this stage of his career is route-running, against a top 10-level cornerback having his best season in James Bradberry.

You do the math on that result but the coach and the QB should both be shoving elbows to throw each other under the bus when it comes to the progression on that play.

“On the play, it’s obviously part of the progression, thought we had an opportunity there to make a play,” Pederson claimed. “I’ve just got to look at the tape and see because it is part of the progression, but it’s also based on the decision of the quarterback to go there, too. I’ve just got to look at the film and take a look.”

That look will show the kind of a situational collapse that helped the kindling upset the fire.