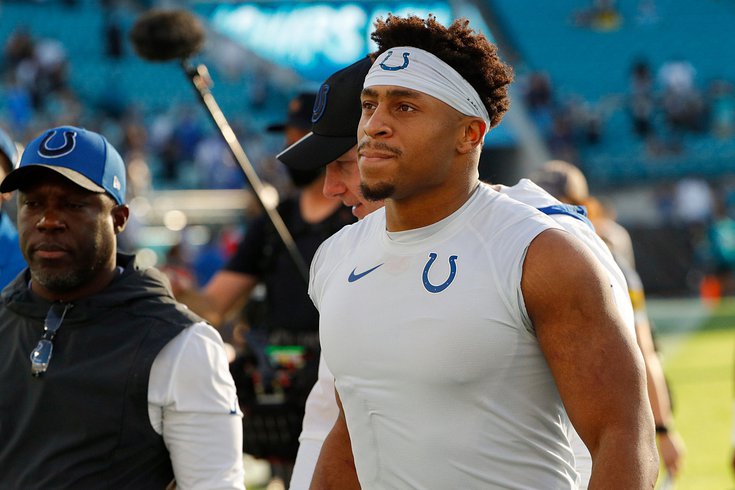 The Philly area may have produced the NFL's best running back in Jonathan Taylor.

It seems like QB injuries were one of the storylines in Week 4, as several setbacks (or benchings) highlighted a week without any shortage of nagging issues to frustrating fantasy owners. But a few blockbuster injuries to first-round fantasy talents also could cause headaches.

As we do every Monday here's a whip around the latest news to injuries to key fantasy football stars after four games:

Let's begin with the No. 1 (or 2) overall fantasy pick. Taylor hurt his ankle and did not return Sunday, despite getting it taped on the sideline. It's a high ankle injury and he'll have all the necessary scans back in Indianapolis Monday. With the Colts slated to play Thursday night, those with Taylor on their roster should be prepared to have a backup plan on the short week.

Managers banking on a breakout season for Williams need to brace for the worst:

#Broncos RB Javonte Williams is feared to have suffered a serious knee injury, source said. He’ll have an MRI tomorrow to determine the full extent, but there is not a lot of optimism surrounding the injury.

Melvin Gordon stands to benefit the most from losing his backfield mate, and Mike Boone could be worth finding on waivers as he'll be Gordon's No. 2. Everyone is hoping it is not a torn ACL.

A lot of fantasy owners (at last those who are late risers) were screwed over a bit when they learned Kamara was a late scratch in London in Week 4. His rib injury is clearly lingering as he did get some practice time in prior to their overseas stint. He will likely be questionable for another week so pay close attention.

The good news, it seems, is that somehow Tagovailoa avoided serious injury with his second concussion in as many weeks. But still, he likely won't be starting next week and with the weapons in Miami, Teddy Bridgewater is very much a roster-worthy quarterback.

Jones hurt his ankle and left the game until his understudy Tyrod Taylor got a concussion, and both will have their statuses up in the air for Week 5. It'll be very interesting to see how things go in practices this week for the 3-1 Giants.

The Lions stud wideout missed Week 4 due to an ankle ailment but he's expected to have a realistic chance to play in Week 5. In his absence, T.J. Hockenson had himself a day.

Higgins had a monster Thursday night — an outing that could have been even bigger had he not sustained a leg injury late. With 10 days off between games it's likely Higgins could be fully healed for Week 5.

One of Carson Wentz' top targets hurt his hamstring during the Washington loss, but after the team's recent outing he told reporters he thinks he will be fine. Watch him in practice midweek.

Brown's fantasy dalliance is likely close to ending anyway, with Michael Gallup returning to the roster but a neck injury might make Brown a player worth dropping. Keep an eye on his status and be prepared for a drop in production regardless.

The Bills slot receiver took a hard hit to the head and will be in the concussion protocol this week. His status is up in the air.

The Titans' first-round pick hasn't had the best start to the year in Tennessee and it could be even worse after Burks was carted off with a foot injury, and later was seen leaving the stadium in a walking boot. The timeframe of his injury should emerge early this week.

Tom Brady likes throwing to tight ends but Brate hasn't had the most consistent start to his year, and a possible concussion from Sunday Night Football could mean tight end streamers best look elsewhere going forward.