Plus updates on Christian McCaffrey, Dalvin cook and others... 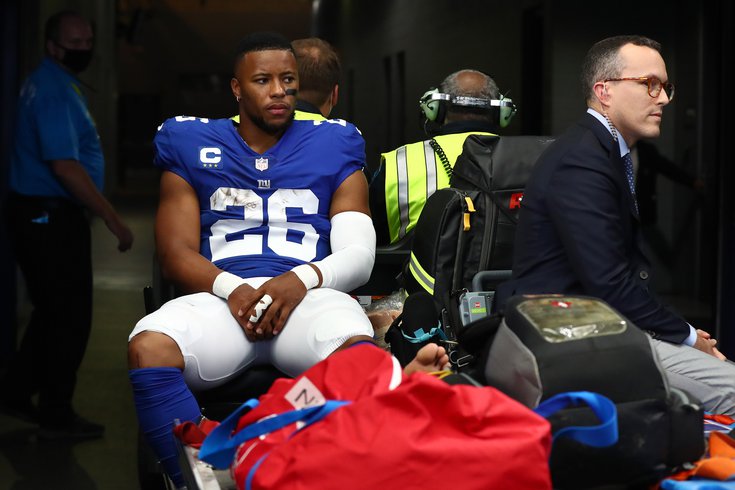 Saquon Barkley may not be out for as long as you think.

There was a bit of carnage in Week 5, with a ton of superstars going down with injuries, from Saquon Barkley to Russell Wilson to Tyreek Hill.

The timing couldn't be worse, as bye weeks for the Falcons, Jets, Saints and 49ers in Week 6 will make this a tough week for fantasy team owners.

We're here to help the best we can, which is why we've compiled a list of the biggest injuries from the week, along with the latest available information and a tidbit of advice on how to proceed if you are an owner of the injured player in question.

It's a long list this week. Take a look:

Wilson's streak of starting in 149 NFL games in a row is going to end next weekend, as his hand injury will cost him around four weeks, the team is saying. He underwent surgery Friday to repair his fractured middle finger on his throwing hand and will diligently work to come back to the Seahawks as they try and tread water without him. Geno Smith played relatively well in his absence and will likely be the starter going forward. There may be a dip in the production of Tyler Lockett and DK Metcalf with Wilson out, but both should remain viable starters anyway.

The Giants's offense had a bloodbath of injuries Sunday — already missing Sterling Shepard and Darius Slayton — and we'll dive in starting with the team's most important skill player in Barkley. Reports say it's a low ankle sprain, which is probably the best possible news given the circumstances. He will miss at least one game, but with his freakish recovery ability he may be back on the field in Week 7.

Golladay exited with a knee injury, which was said to have been hyperextended. His absence, along with that of the other wideouts we mentioned above more or less anointed rookie Kadarius Toney as the No. 1 option on offense and he didn't disappoint, and could be a starting option in Week 6 with reports that he will not be suspended following his ejection at the end of the Giant's loss to Dallas.

And who would be throwing to Toney? Likely not Jones, who had a concussion Sunday and will be in the league's protocol this week. He'll be replaced by Mike Glennon next week if he is unable to start, making pretty much the entire New York offensive unit a stay away in fantasy this week.

After having a pretty impactful performance Sunday night against the Bills, Hill left with a knee injury following 13 targets in the loss. The extent or details of the ailment aren't yet known but we'll update you here once they are made public.

CEH is another important Chief who left with a knee injury. His backups Jerick McKinnon and Darrel Williams could be waiver wire targets and start-able options depending on how things go with the starter.

The Washington wideout exited Sunday with a groin injury and there's a good chance it costs him playing time. Terry McLaurin will obviously become even more of an asset should Samuel miss any games.

This is a weird one, as Burrow played very well Sunday before going to a local hospital due to having a throat contusion. Seeing as he played through it, the injury isn't expected to force him to miss any games but it's certainly something to keep an eye on.

At the end of Pittsburgh's Week 5 win, many may have missed that Harris left with cramps and did not return. He should be fine going forward but it is worth mentioning.

In contrast to Harris likely being fine, Smith-Schuster likely will not be, as he was admitted to the hospital after getting a pretty gruesome shoulder injury. Pittsburgh has a variety of talented pass catching options who'll benefit as he is expected to be added to the Steelers' injured reserve list.

Sources: #Steelers WR JuJu Smith-Schuster had surgery last night on his injured shoulder and is out for the season. The procedure was successful. A tough loss for a Pittsburgh offense that is showing signs of hitting its stride.

This isn't a new injury, but seeing as he was the No. 1 pick in almost every fantasy draft this year it's worth updating his status. The star tailback practiced in limited capacity during the week leading up to Carolina's game against the Eagles and it seems like his hamstring is cooperating enough that he has a very good chance of being back on the field in Week 6.

We'll provide a quick update on another top 3 fantasy pick in Cook, whose ankle allowed him to also do some practice work this week and was listed as a game-time decision leading up to kickoff Sunday, when Minnesota ruled him out. Chances are he'll be ready for Week 6 but keep an eye on things.

Breaking through as the top running back in the Bill Belichick packing order, Harris hurt his ribs in a win against the Texans and didn't return. If he remains hurt — with James White also out — Brandon Bolden and Rhamondre Stevenson would be the ones getting the carries.

After a few weeks of emerging as a playable option at tight end, Arizona's Williams left Sunday's win with a knee injury and did not return.

Cephus emerged as a FLEX option for the struggling Lions offense, but he has a shoulder injury that reportedly "doesn't look good." Maybe it's time for Amon Ra St. Brown to become a fantasy option.

Did you notice that Marquez Calloway had a breakout performance Sunday? Well it was probably because Harris got hurt and didn't finish the game as the Saints offense had a big day. His hamstring injury could cost him time depending on its severity so keep an eye on it.