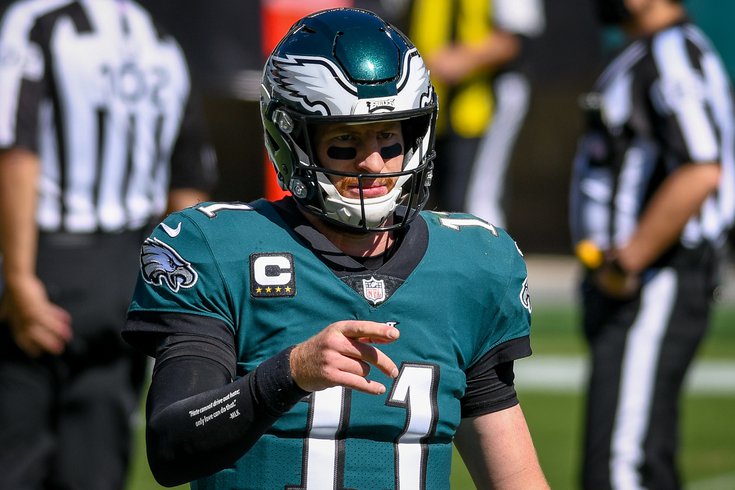 It seems like every day there's another big name NFL starter set to miss time. It's hard to keep track and it certainly digs into your depth as a fantasy football team owner.

As we do every week, we're here to help. We've singled out a player at each position we recommend starting and sitting ahead of Week 8 action. We are limiting this to players who are on the borderline of being starting options and avoiding the obvious (like, yeah, start Patrick Mahomes this week, you don't need to read that from some "expert").

Here's a look at our sit and start advice for Week 8:

We'd love to muse on and on about how Wentz has turned a corner and he is starting to look more and more like his old self, but this match up is so good for the Eagles even bad Wentz would post some numbers. The Cowboys defense has been absolutely dreadful all season and without an offense (they're on their third string quarterback now, more on that later) to support them, this could get ugly fast. Add to that the fact that Wentz could have some more of his weapons healthy, like rookie Jalen Reagor, and an outside shot at Dallas Goedert and Miles Sanders, and this is a can't miss starting option. Fire him back up if he's been sitting on your bench.

The Steelers' match up against the Ravens defense is fierce, and Big Ben has been an average quarterback so far this season — resembling a game manager at this point in his career. He's eclipsed 300 yards just once this season and two touchdowns twice. Last week he threw three interceptions against a Titans defense that is not as skilled in the secondary as Baltimore is. His floor is probably in the high teens (points scored), but it would be hard to see Roethlisberger really getting into the top 10 or even 15 in QB fantasy points this week.

Were you able to land Hasty off waivers this week? Good. Don't waste any time getting him in the line up. The Niners like to run the ball and without Raheem Mostert or Jeff Wilson or Tevin Coleman in the line up, Hasty and teammate Jerick McKinnon will be the ball carriers against a Seattle team that can give up some running yards. There's no telling whether he or McKinnon will get more carries but he got a lot more in Week 7, so going off that, Hasty could be a risk worth taking in Week 8.

This duo, with Austin Ekeler still sidelined, is kind of hard to pin down. Last week, Jackson had 10 touches and Kelley had 17, with neither eclipsing 60 total yards and both getting just 8 fantasy points. In Week 8, the Broncos actually have a pretty good run defense and the Chargers offense will no doubt be run, once again, through the arm of rookie sensation Justin Herbert. Neither running back is a very good play this week.

Seattle's passing defense has been really their biggest downfall and they should be malleable to the Niners moving the ball in their upcoming match up. With Deebo Samuel expected to miss the game, Aiyuk will have even more opportunities coming off his career high of 115 yards last week. Two games in a row over 100 yards could break him into the no-brainer category.

A seventh round pick from James Madison University will be under center against the Eagles on Sunday night, and if you have faith that Ben DiNucci can bring you to the promised land, good luck with that. And unfortunately for those who benefitted from Dak Prescott's shortly lived high powered Dallas offense, it's hard to justify starting any of the Cowboys wide receivers this week if you have a choice not to. While it isn't beyond the realm of possibility that someone like Amari Cooper posts respectable numbers, there's literally no way to predict what this offense will do in Week 8.

Tua Tagovailoa will make his NFL debut this week, and reports from Dolphins camp are that he has significant chemistry with Miami tight end Gesicki already. Which makes a little sense. A young quarterback having a tight end he can trust goes a long way, and he may be a safety valve in Week 8 who gets quite a few targets. It's not the worst idea, if you're in a situation where you need to consider Gesicki, to give him the start this week and see what happens.

The thinking here is that Bryant's two touchdown performance last week was a flash in the pan, and that the Odell Beckham-less Browns will continue to spread the ball around. Bryant also is third on the depth chart behind David Njoku and Austin Hooper (who will likely miss at least one more game). Bryant is a wait and see option who will get less value when Hooper returns anyway.