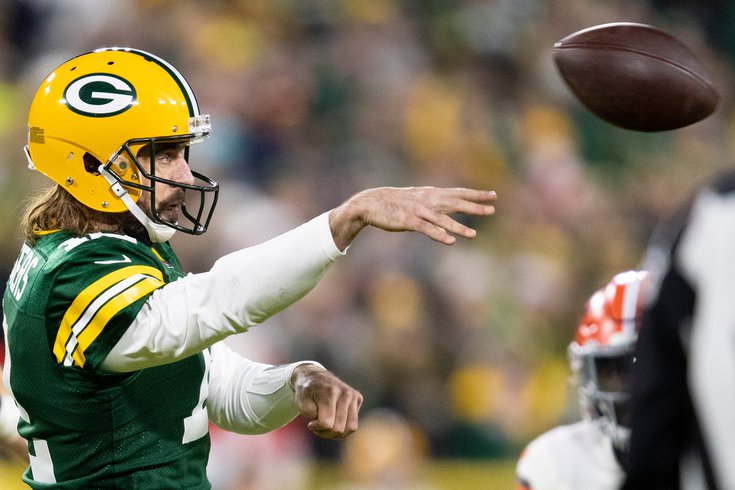 Will Aaron Rodgers bounce back in Week 2?

We're on the precipice of Week 2 in the NFL and already many fantasy football team managers are faced with some brutally tough decisions.

A bevy of superstars ranging from Aaron Rodgers to Alvin Kamara struggled to start the season, and it's up to us to determine whether that's a sign of decline, or just a one-week blip.

As we do every week, here's a look at a player at each position we recommend you start (if you have him on your roster) and sit. Keep in mind that if your player is an obvious start every week like Jonathan Taylor, we're not going to bother mentioning them. This is for help with borderline, tough decisions.

You were probably pretty satisfied to draft the reigning MVP late in your draft despite his losing top target Davante Adams to the Raiders. And you are probably quite worried after he posted less than eight fantasy points in his Week 1 loss to the Vikings. Is there a chance the lack of reliable Green Bay wide receivers (more on that in a bit) will help to bring on his decline and make him fantasy irrelevant? Of course there is. But the odds seem to be more likely that he'll rebound, particularly against a terrible Bears team. If Rodgers isn't good in Week 2, then it's time to try another option, but it isn't the worst idea to roll with him at least one more time here to start the season.

It's hard to really criticize Lance for his 11 fantasy point day in Week 1. It was a slop-fest in Chicago. Lance also ran the ball 13 times which is a good sign for his fantasy production down the line. However, he wasn't particularly accurate throwing the ball. Many Lance drafters took him in tandem with a reliable Kirk Cousins (or Rodgers) type. Let's fire up that QB2 one more time so we can get a look at how Lance does on dry land in Week 2.

Fantasy rankers preferred Travis Etienne to Robinson, who returned last week after a torn ACL in 2021, but Doug Pederson and the Jaguars preferred Robinson, who out-touched Etienne 12-6. Robinson scored two touchdowns in the Jacksonville opener, and touchdowns as we all know are very volatile and random. But it does look as though the workload favors Robinson, and as such, he's the preferred back on the squad. Ride the wave against a less than stellar Giants team in Week 2.

We're still in wait and see mode with Houston's rookie Pierce, who got a ton of buzz during draft season but had just 39 total yards on 12 touches in his NFL debut. Rex Burkhead had 19 touches, and caught five of eight targets and looks to be the dump-off back everyone hopped Pierce would be. It is fully possible that Pierce's workload slowly creeps up as he gets his pro football sea legs, but with so many other healthy options at running back early in the season, take another week off from Pierce.

It feels weird to be circling back to the Jaguars twice this week but Kirk rode a lot of fantasy teams' benches last week and he proved that he's got a chance to be uber productive in 2022 after his Jacksonville debut. Kirk saw 12 targets last week, hauling in just six for 117 yards. If he gets double-digit opportunities every week like this he should be a double-digit scorer more often than not.

We felt comfortable recommending Rodgers in Week 2 — but we still don't know who he'll be throwing to. Allen Lazard looks slated to return from injury and he is expected to be the top target for the Packers going forward, but last week really did nothing to give fantasy enthusiasts any confidence in who else might be commanding Rodgers' attention. Rookies Romeo Doubs and Christian Watson each showed flashes, but as of right now it's anyone's guess who emerges as the top target. All three of the aforementioned wideouts are worthy of a spot on your bench, but until the receiving hierarchy takes shape, none are startable.

In a disappointing Rams debut, Higbee had 11 targets despite catching only five balls for 39 yards. It seems completely possible that Allen Robinson II is washed up, and Higbee could be the second most productive pass catcher in Los Angeles behind Cooper Kupp. With a very favorable matchup against a Falcons team that could have the worst record in the NFL this season, fire up Higbee.

Fant was sent from Denver to Seattle in the Russell Wilson trade and many thought he might be a sleeper as a late tight end fantasy draft selection. That has not proven to be the case early, as Fant was a non-factor in Week 1 catching just three passes on four targets. There are some more reliable options to lean on at tight end.