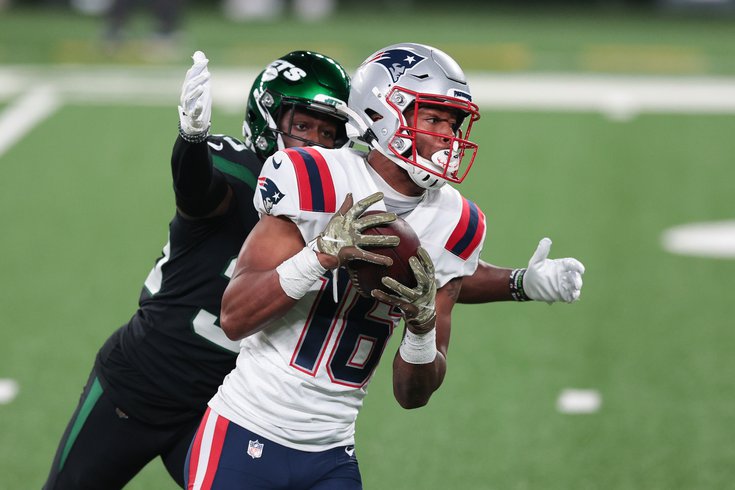 Is Jakobi Meyers a smart fantasy pick up this week?

It's Week 10 in the NFL, and in your fantasy league, and if you are in need of some roster help you aren't alone.

A bevy of injuries, bye weeks and COVID issues have nearly everyone scrambling to fill some spot on their roster. As we always do here at PhillyVoice, we've scoured the waiver wires to find a player (or two, or three) worth a FAAB bid and an add at each position from free agency ahead of next week's action.

Lock has been on fire of late, scoring six touchdowns in his last five quarters of play and more than 57 combined fantasy points in his last two starts. He'll have a favorable match up against Las Vegas, a team that isn't great at stopping the pass. Lock is available in more than 80% of ESPN leagues and is a great streaming option if you have Patrick Mahomes, or someone else on a bye.

Johnson has done next to nothing as the No. 2 RB in Houston, with David Johnson dominating in snaps and touches. But David suffered a concussion last Sunday, and there is a realistic chance he can't play in Week 10. If he isn't cleared from the concussion protocol, there is a huge opportunity for Duke to put up some numbers. He's far from a sure thing (this is injury-report dependent) but it might be worth taking a chance that David Johnson is still concussed.

It's risky sometimes to always go with the hot hand, a week after they are hot, especially when a player comes seemingly out of nowhere. A great example of this is Meyers, who exploded on Monday Night Football for 169 yards on 12 catches in New England's comeback win. This came after 118 yards combined in Week's 8 and 9, and just one target in the seven weeks prior. So is Meyers a safe bet to replicate his production as Cam Newton's favorite target again in Week 10? That's anyone's guess due to the small sample size, but he is surely a gamble worth making based on his current trend.

With Jack Doyle likely out after a Week 9 concussion, there's a chance Burton could get some more targets on a short week. The former Eagle has gotten at least four targets per game in every game played this year with mixed results, mostly as the second tight end option. If he is TE1 in Week 10, he may be a start-able option who is not necessarily touchdown dependent.

Defense to stream: Saints vs. 49ers

The Niners have so many injury issues it's hard to know for sure which offense will show up in any given game this season, but based on last week's embarrassing showing, starting the Saints against them this week (after the Saints defense had its way with Tom Brady and the Bucs) is not a bad plan.