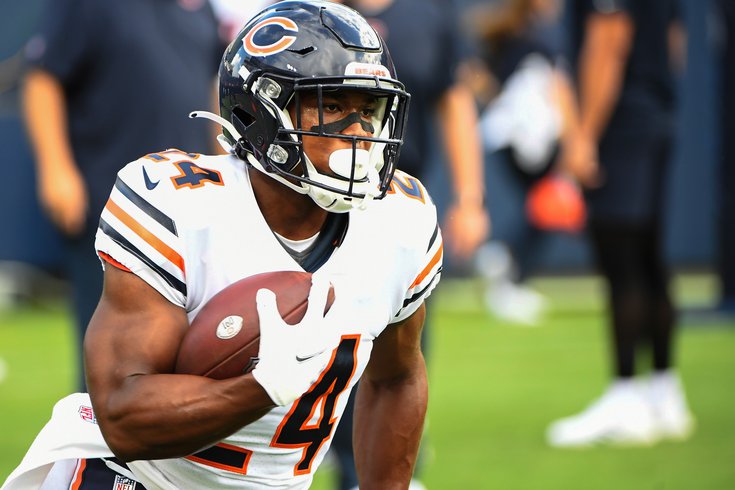 The Bears will have a new RB1 on Sunday.

Injuries are piling up and some expected stars are fading — making for some very lucrative potential pick ups for fantasy owners right now on the waiver wire.

As we do each and every Tuesday, let's scour the free agent lists on the various fantasy platforms in search of the best pickups at each position heading into Week 5 action.

It might be time to seriously consider starting Darnold every week. The resurgent QB has thrown for five touchdowns and run for five more, while hovering around 300 yards passing each and every game. The Eagles defense — his team's Week 5 opponent — has shown very little ability to slow down passing attacks and Darnold could have another big game at home Sunday. He is owned in just 23% of leagues on ESPN.com.

This pickup doesn't come without risk. Herbert, after all, is an unproven sixth round pick and a rookie. But the Bears are a mess right now, David Montgomery reportedly has a knee sprain and his backup, Damien Williams, also got hurt in Week 4 with a quad injury. It's possible Herbert falls backward into the RB1 spot for Chicago. And if he does, taking a stab at him on waivers could be worth it — you never know what he might turn into. If you have the roster space, take a chance on him, as well as Williams, who is also widely available and has a chance to start himself.

Somehow, the former fantasy stud who has moved on from the Bengals to the Cardinals is mostly unowned in fantasy, riding the free agent wire in 75% of Yahoo Leagues. That's a mistake. The Arizona offense is absolutely lights out, and everyone should try and have a piece of it on their roster. Green has had exactly six targets in all of his first four games and has had 11 or more points in three straight weeks. He is coming off a 15.2 point performance (.5 PPR) in Week 4 and has shown he's going to get opportunities.

There are some very good tight ends out there, but they don't quite have the wide availability of Conklin. Jared Cook and Dawson Knox, both breaking through recently, are around the 45-50% ownership rate. Which is why we chose to spotlight Conklin, who has had 22 targets this season for the high powered Vikings offense and is available everywhere. For those streaming the position, Conklin has had the volume to be worth starting each week.

The Lions have not yet won a game and streaming-wise this is a good under-the-radar defense to ride in Week 5. They turn the ball over more than once per game.