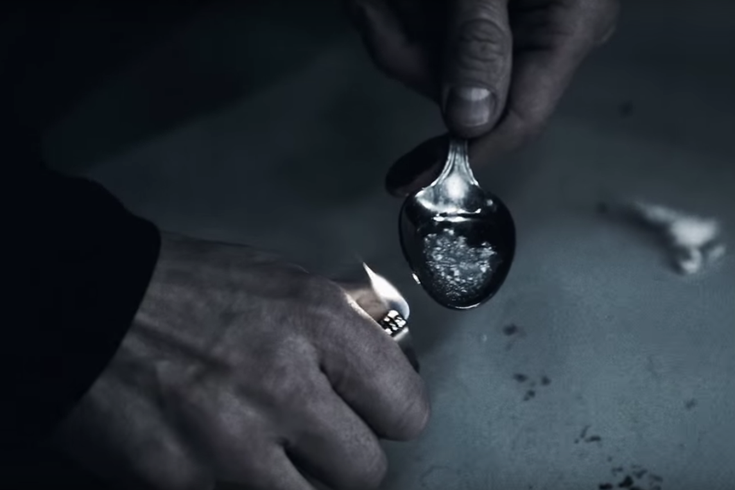 Screenshot from Chasing the Dragon/for PhillyVoice

In this image from the FBI and DEA's drug education film "Chasing the Dragon: The Life on an Opiate Addict," a user is shown preparing heroin for injection.

The thin needle oozed with poison as it pressed against the arm of a user.

It pricked the skin of an arm pockmarked with deep scars and divots – spots where meat tenderizer, commonly used to cut heroin, has dissolved muscle and flesh. The gruesome scene was accompanied, onscreen, by a voice extolling the dangers of heroin abuse.

The footage, part of "Chasing the Dragon: The Life of an Opiate Addict," a new film for educators with an accompanying workbook for the classroom, was produced by the FBI and the DEA. The video was aired Friday afternoon in a darkened boardroom at 6th and Arch streets for law enforcement officials, community representatives and educators to watch life stories of heroin addicts feeding their addiction. The film is available online here.

"We are still doing the law enforcement part, too," he said Friday. "But the reality is that we have limited resources to deal with the scope. We need to focus on prevention and education ...We need an approach that is not just 'arrest everybody'."

Memeger said heroin use in America has ballooned into an "epidemic" and hoped that the film, which chronicles the experiences of seven people whose lives have been impacted by heroin and prescription pill abuse, would help educators show the real world results of drug use.

"This epidemic that we are seeing sweep the nation and this region is probably the worst we've seen in decades," said William F. Sweeney Jr., the special agent in charge of the FBI’s Philadelphia division. "It knows no boundaries."

Sweeney said the film cost taxpayers about $20,000 to produce.

The stories of addiction shared in the film are told through one-on-one interviews. Some of the individuals note that they started drugs by smoking pot.

The film seems to make a point to discuss the marijuana use of its subjects – a drug that several states have legalized and Philadelphia has reduced penalties for its use – even though most of the addicts profiled said they only became addicted to heroin after being introduced to opiates through prescription pain pills. Memeger said the hope was that viewers would see "life is a series of choices."

For the most part, those profiled in the film said they didn't think about hard drugs until they started taking prescription pain medication.

One woman said her addiction began after taking pain medication following the birth of her child. Another was given free samples of pills by a friend who worked in the pharmaceutical industry, and yet another learned to abuse prescription pills after a friend told him how to get high with things around his home.

"Prescription drugs are the same thing. It's an opiate," said "Sarah," one of the subjects, in the film.

Memeger said he personally refuses to use opioids and even has a prescription for Oxycontin, a powerful opioid, following a dental operation, that he refuses to use. The Centers for Disease Control and Prevention recently asked the nation's doctors to exercise more care and consider alternatives before prescribing the addictive pain medication.

"You have to be very astute about how you manage your pain medication," he said.

Memeger said his office has seen "an explosion" in the rates of heroin addiction as addicts move from expensive prescription pills to heroin's "cheap high."

According to David Cali, assistant special agent in charge of the DEA’s Philadelphia division, the statistics for prescription pill and heroin abuse are sobering. Last year, he said, 47,000 people died of drug overdoses and 61 percent of those deaths were due to heroin or opioid use.

Also, he said, America has a population that is roughly five-percent of the world's population, yet, America accounts for 95 percent of all pain medication use in the world.

"That's a staggering statistic," Cali said. "There are no boundaries. It's in every segment of society."

After viewing the film, two community workers who assist heroin users at an outreach program in Camden– they asked only to be identified as Brenda and Helen – said the program helped show the true effects of opioid use on addicts, but also their friends and family as well.