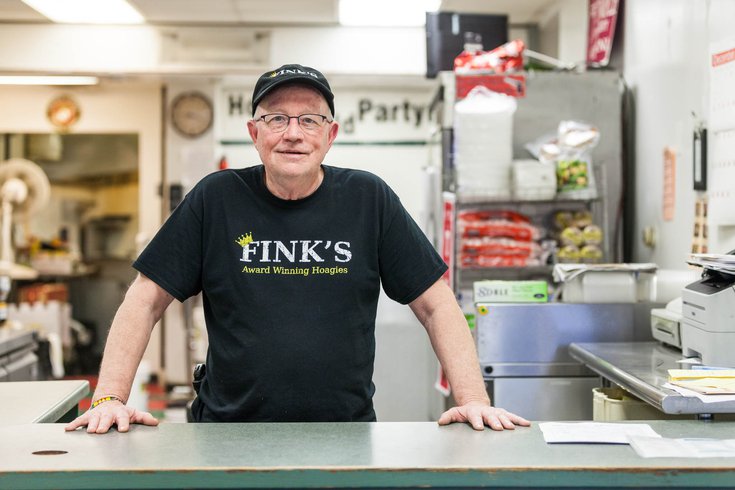 Dennis Fink, owner of Fink's Hoagies in Northeast Philadelphia, spoke out about the city's enforcement of COVID-19 protocols after his restaurant was shuttered for violating mask rules. The shop reopened following an appeal and a public outcry on social media.

Fink's Hoagies was given the green light Monday to reopen from a brief closure ordered by Philadelphia health officials — but not before the bureaucratic drama turned ugly on social media.

With one exasperated Facebook post Friday, owner Dennis Fink exposed the raw nerves of nearly a year of COVID-19 pandemic restrictions that have hammered small businesses, and restaurants in particular.

His post detailed a timeline of events that led to the shop's latest closure. An inspector had entered the store on Dec.11, found Fink on the phone with his mask below his nose, and given him a cease operations order with an attached $315 fine.

Enough is enough. The bullying and shaking down of small businesses by the City of Philadelphia and their health...

"I didn’t have my mask properly placed on my face," Fink wrote on his Facebook post. "I accepted my fine and the forced two day closure by the City. We were told after 2 days we could operate as normal. We reopened to the public on Wednesday, December 16th at normal operating hours."

But that's where the fine print of the city's orders were lost in the shuffle. Though Fink believed he could reopen his shop, the Department of Public Health's Office of Food Inspection required the store to call back for re-inspection to ensure the violations had been corrected and the store could reopen.

Fink never did that.

Weeks passed by until the same health inspector returned to the store on Jan. 6., Fink said. She questioned why Fink had reopened the shop on Princeton Avenue, where the business has been for the last 14 years, without scheduling the required re-inspection.

The inspector left the store and later returned accompanied by Philadelphia police officers. She had another cease operations order and another $315 fine, Fink said. Police left the store without arresting Fink, even though he refused to close down as ordered in the days that followed.

In his Facebook post, Fink included security camera images from the inspector's second visit, showing that all of his employees were wearing masks at the time she arrived, contrary to her report. He accused the health department of "bullying" and conducting a "shake down."

"We’re not trying to fight the city, we agree with the mask mandates," Fink wrote of the situation. "We even added a plastic barrier between us and our customers on the recommendation of this same health inspector on 12/03/20. We just want answers. We want to be able to continue to run our business without being harassed and shaken down by the City for $315 every other week."

In response to the Facebook post, Fink's received overwhelming support from customers, other business owners and City Councilman Bobby Henon.

But the tone of some Facebook comments went overboard, according to information provided by the Office of Food Protection.

"Next time the health inspector shows up, hit him in the face with a brick as hard as you can," one person wrote.

"I would have shot her and carried on with business," said another. "I'm tired of these idiots."

The health department is working with police to address the threatening comments.

Philadelphia restaurants have been operating under strict guidelines during the coronavirus pandemic, including a requirement that all employees and customers wear masks and maintain appropriate distancing to prevent transmission of COVID-19.

The health department does not maintain a specific list of businesses hit with citations or cease operations orders related to violations of COVID-19 protocols.

But a spokesperson said Fink's Hoagies was subject to a process that has been well-known for years.

"This is standard practice and every one of the thousands of other restaurants that are inspected are subject to the same rules about fine payment and re-inspection after a cease operations order," the spokesperson said. "At no point has the Health Department proactively checked in with a restaurant to 'confirm' that they’re OK to open."

There is no reason Fink's should have been unaware of the protocol for reopening, the spokesperson added.

Last February, the restaurant was issued another cease operations order for several sanitation violations. The restaurant called the Office of Food Protection to set up a re-inspection and was cleared to reopen on March 3, a little more than a week before the COVID-19 crisis entered full swing in the United States.

Since his initial Facebook post last week, Fink shared an update that hoagie orders had increased so rapidly over the weekend that the shop ran out of rolls. Fink also asked that supporters keep their comments "clean and threat-free" as he continued to work with the city.

"We wouldn’t be where we are today without our great customers," Fink wrote. "We can’t say enough how much we love you all."

On Monday, a day Fink's is normally closed, the health department confirmed that a re-inspection had been completed and updated on the department's website.

"They were found in compliance, and in an effort to support small businesses vital to our community, we agreed to allow them to reopen without having to pay the re-inspection fees prior to opening, as is usually the standard," a spokesperson said.