The officer reportedly posted photos of the 'Stop the Steal' rally, but it's not known whether she stormed the U.S. Capitol 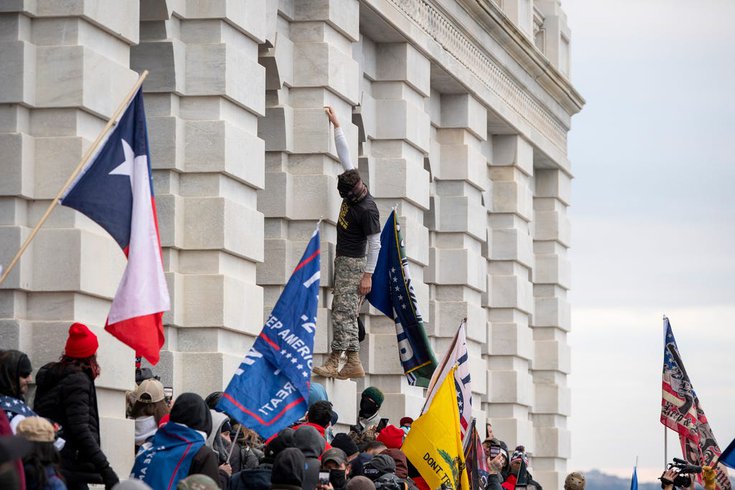 Philadelphia police detective Jennifer Gugger is being investigated by the department's Internal Affairs division to determine whether she took part in the violent insurrection at the U.S. Capitol.

A Philadelphia police detective who attended the "Stop the Steal" rally in Washington D.C. on Wednesday is being investigated to determine whether she had any role in the deadly U.S. Capitol riot that followed.

Jennifer Gugger has been reassigned from her role on the unit that investigates the backgrounds of potential recruits while the Internal Affairs Division conducts its investigation, the Inquirer reported. Gugger posted now-deleted photos on Facebook of the Washington Monument and a crowd of people on the street.

Gugger tagged a group of friends who later posted their own videos of the crowd as it gathered at the U.S. Capitol, the newspaper reported. A tip received by police did not provide evidence that Gugger was in the Capitol or participated in any violence.

Gugger's Facebook profile picture recently was a reference to the QAnon conspiracy theory movement, showing lightning bolts hitting the Washington Monument behind the letter "Q" with "The Storm has arrived" written below, the newspaper reported.

Gugger works in the recruitment unit of the Philadelphia Police Department and is responsible for making sure that potential recruits are fit to serve.

"We are aware of social media posts that allege that a Philadelphia Police Department detective may have been in attendance at the events in Washington, D.C. on January 6th," a police spokesperson said in a statement given to 6ABC.

"An IAB investigation has been opened to determine if any PPD policies were violated by the detective, and if they participated in any illegal activities while in attendance. The detective's assignment has been changed pending the outcome of the investigation."

Philly police officers are permitted to attend political events as spectators as long as they are not on-duty, in uniform, on city property or using city resources or their title, according to CBS3. Police officers also are allowed to share their political opinions on social media.

Pro-Trump supporters rallied near the White House on Wednesday, calling for Congress to halt the certification of the Electoral College results, which deemed Joe Biden the winner of the 2020 presidential election. They alleged widespread voter fraud prevented President Donald Trump from winning re-election — a claim that has no merits.

Trump again repeated baseless claims and encouraged his supporters to march to the U.S. Capitol, where lawmakers had gathered to ratify the election results.

The event quickly turned into a violent riot. Five people died, including a Capitol Police officer and a Trump supporter. Three others died of apparent medical emergencies.

More than 120 people have been arrested in connection with the riot, according to the Associated Press.

With just days remaining in his presidency, Trump is now facing the prospect of a second impeachment trial and calls for resignation for inciting the mob. House Democrats are expected to introduce articles of impeachment against the president this week.