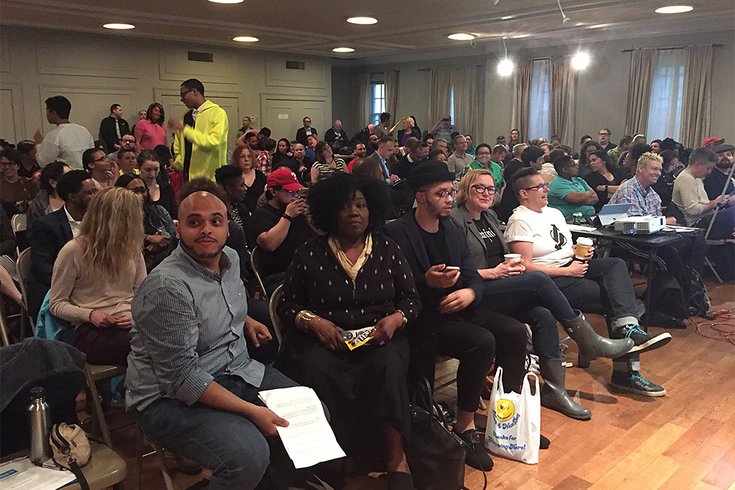 A large crowd waits for the start of the first LGBTQ 'community conversation' on Thursday night at William Way LGBT Community Center in Center City. Amber Hikes, executive director of the Mayor's Office for LGBT Affairs, told the audience that it will be challenging to overcome the controversies that have plagued the office since former executive director Nellie Fitzpatrick was fired in January. "This is hard as hell," she said.

It was standing room only at the first-ever LGBTQ Community Conversation on Thursday night at the William Way, a public event organized by the Mayor’s Office of LGBT Affairs.

The goal, said Amber Hikes, executive director of the office, is to get to the heart of some of the most pressing issues impacting the city’s LGBT community, and to ultimately create dialogue between the community and City Hall.

In her first public appearance since the controversial removal of Sharron Cooks , the former LGBT Commission chair who was ousted amid concerns over inappropriate social media posts “attacking” other commissioners, Hikes said the group is moving swiftly forward on key initiatives in what she described as “challenging times” for LGBT Americans.

She promised the overflow crowd that she and the 20 commission members (down from 23 when the commission was announced in early February ) will be “making space for people who have not been heard.” She outlined goals, like creating committees to address everything from racism to immigration, and was interrupted several times by applause.

“We have to do better as a community,” said Hikes, announcing that subsequent community conversations will be held outside Center City with the purpose of encouraging participation from diverse pockets of the city.

To a crowd that included Councilman Derek Green, state Sen. Sharif Street and LGBT leaders and activists, including members of Black Lives Matter and the Black and Brown Workers Collective, Hikes announced that the Office of LGBT Affairs will take a more visible, proactive approach to community relations by advocating for the most vulnerable – people of color, transgender individuals and youth. She’d also like to increase overall competence in the city when it comes to LGBT issues, and find a concrete way to document the community, most likely an official LGBT census.

'THIS IS HARD AS HELL'

Since Hikes took office, she’s already helped move the first-ever Transgender Day of Visibility resolution forward in City Council. She also announced that a rainbow flag will be flown over City Hall for Pride month in June, with a special event kicking off festivities on June 8. 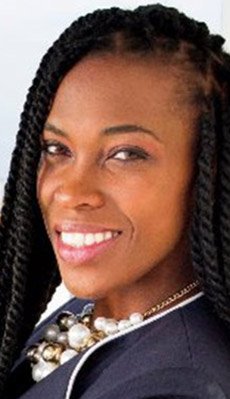 Amber Hikes is the new executive director of the Mayor's Office of LGBT Affairs. Her early tenure has been marked by controversy.

LGBT Affairs is also working with the Independence Business Alliance, William Way LGBT Community Center and Independence Blue Cross to create workshops that will ideally help train future LGBT leaders, people who will ultimately be poised to join boards and lead organizations. The goal? To diversify and, said Hikes, to ensure leadership truly reflects the diverse communities it serves.

Will it be easy overcoming controversies that have plagued the office since former executive director Nellie Fitzpatrick was fired in January? Absolutely not. Hikes has already lost three commission members in less than two months, resulting in whispers and rumors that have led some in the LGBT community to lose faith in the new commission before it’s even had a chance to get off the ground.

“This is hard as hell,” Hikes told the crowd, and the almost 3,000 people livestreaming the event. She didn’t shy away from tough talk on racism and the recent events that have kicked off a firestorm of speculation on social media, including personal attacks on Hikes.

“The decision that the commission had to make [to vote Cooks out] was not taken lightly,” she explained, and called the former chair a “friend” and “colleague.” She said the experience to let her go was “challenging and heartbreaking.”

Hikes promised that a transgender woman of color would be selected to replace Cooks. She also fielded questions about race relations, crime in the Gayborhood and disability rights.

'BLACK LIVES DO MATTER,  EVEN IN THE QUEER COMMUNITY'

Asa Khalif, a spokesperson for Black Lives Matter, offered an idea of a hotline to be set up where people who have suffered hate crimes and police brutality could call for assistance, and where crime victims could find out how to report these incidents.

“Black lives do matter, even in the queer community,” said Khalif. “We need our allies to support this as well.”

Hikes confirmed that a hotline was already in the planning stage, as well as efforts to work closely with the Philadelphia Police LGBT Liaison Committee to improve overall community relations, like putting a queer person in charge of the committee, which is currently led by a straight, cis-gender ally.

Still other community members shared concerns over “toxic” attitudes pervading social media and the LGBT media, and how all of the drama on the commission distracts from real problems, like youth homelessness, addiction, mental health and immigration.

Those in attendance were encouraged to meet one-on-one with committee representatives to find out how they could get involved with issues of importance or personal interest to them.

Each commissioner made his or her pitch in hopes of wrangling grassroots support. Jeffrey Jordan, pastor with the Metropolitan Community Church, noted, “No person has rights until we all have rights.”

By the end of the event, it was clear that the end goal for Hikes and the commission is to – above all – diversify, and to hopefully kickstart a conversation that continues within the community, one that may even replace criticism with action. There was a sense that after months of bloodletting that perhaps the community could be on its way toward healing, or at least meaningful discussions with the ear of City Hall listening closely.

“Stop the bullying bullshit,” Hikes said, comparing the Herculean task she faces bringing people together with that of our forefathers. She said there was no blueprint then and there isn’t one now.

“People are watching us do this,” said Hikes. “Let’s do it with love.”