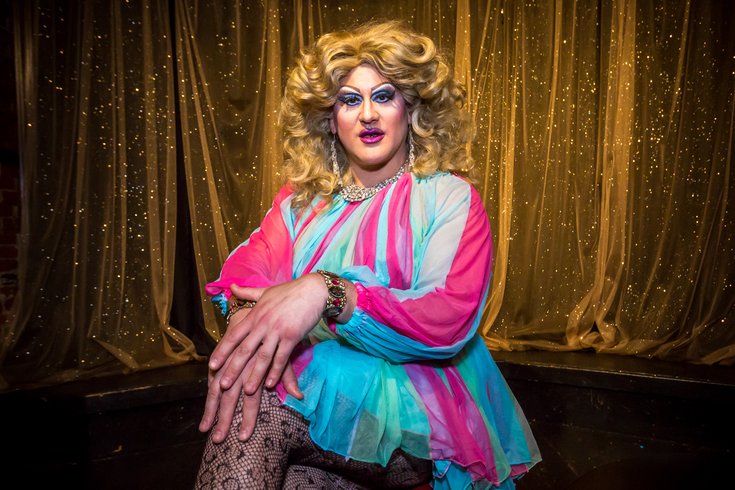 Brittany Lynn before a performance at Tabu Lounge & Sports Bar on Aug. 10.

As far as Philly drag queens go, few can dominate a room the way Brittany Lynn does.

On the scene since the ’90s, then doing campy standup comedy in "thrift store dresses and fried wigs" at 12th Air Command, Lynn — real name: Ian Morrison — is best known for her quick wit, tall stature (even without heels) and live singing in a world full of lip-syncing. That presence landed has her and her "Miss Fancy Brigade" troupe at the front of the Mummers Day Parade for the past three years. Hell, it even moved the city to decree every March 15 "Brittany Lynn Day."

Here, Ms. Lynn talks about her upcoming "The Golden Gurlz Live" show, drag advice and whether she'll ever hang up her wig.

You’re recreating some episodes of ‘The Golden Girls’ with three other local performers. What prompted it?

I had wanted to do recreations of a few television shows and brought it to my boss at Tabu — about performing these shows as a brunch. At the same time, I got a message from Bella Cane, a theater queen who was working on a production of 'Psycho Beach Party.' She asked if I would be interested in working on a production of 'The Golden Girls,' and if I would be interested in playing Dorothy. I took it as a sign. We had never met before, and she actually portrayed me for a Snatch Game — in the worst way possible. [Laughs] So I was excited to work with her. Once she told me Pissi Myles was also on board, I was in!

Though it’s a recreation, how are you using drag and your personalities to make the show feel new?

We are taking the televised scripts and making them our own. We each bring something wonderful to the table. Pissi as Blanche, Bella as Rose and Connor Michalchuk as Sophia. We actually have a lot in common, personality-wise, with the characters we are portraying. We have brought in one of my very best and long-time friends, Aeryanah Von Moi, as a supporting character, and it's just really amazing getting us all onto the stage and having us improv different lines. We just let anything fly out of our mouths. It makes it somewhat difficult at rehearsal because we spent 90 percent of the time laughing. But adding our own ideas into the mix makes magic. We did our first tech rehearsal and I got chills hearing the segue music and watching these broads in action. We open up Aug. 19 and tickets are selling fast.

Which girl do you most relate to?

I had to play Dorothy. I was Bea Arthur at Tavern on Camac for Halloween, and everyone was gagging at how much I resembled her — which is great but also scary. [Laughs] My bar partner, Jon, has the whole staff there calling me Maude, and I do not mind one bit. Bea was quick, sharp and hysterical. When I first started performing as a comic and drag artist, I would spend so much time preparing material, but then when I hit the stage I found my best lines were from doing 'crowd work.' It is sometimes frowned upon in the comic scene, but it's really where I shine. I had always hosted big gigs like Drag Mafia at Shampoo Nightclub for years — or the crowds at Studio Six in Atlantic City. But when I first started hosting 'Mr. Gay Philly' for Bruce Yelk, I was standing in front of some of my gay idols — Michael Musto, Mickey Boardman and Frank DeCaro — and when I would hear them laugh at some of the stuff that came out of my mouth, well, that to me was my validating moment that I can do this and do it well. Most of the gigs I get are because I can command the stage and work the audience and act quick on my feet in any situation.

There was a queen back in the day named Kenny Kerr. She was a huge drag star who was local and then moved out to Vegas to live the dream. Richard McPeake, the owner of 12th Air Command (what is now ICandy), had brought her to do a one-woman show there, and she was the first drag star I had met before I started meeting all the big gals at Shampoo. I was mesmerized as she gave a slideshow of her mansion in Vegas, clips of her as Streisand with Whoopi Goldberg and the audiences at the show in Vegas. I was like, 'Wow, this could really be a career.' There were not too many drag queens that you saw like that in the public eye. I was chatting with her backstage and she was going to sing Barbra Streisand, but she told me she sings the songs in her own voice, rather than in a Barbra voice. I asked her why and she told me, 'I'd rather be a first-rate singer than a second-rate queen.' She told me to know my strong points. If I could look like Barbra — at the time I did Babs as a lip sync — then I'd come out and give the crowd Barbara. But if I didn't sound like Barbra, then don't come out messing up her material. [Laughs] I learned a lot from meeting her, and she was a big influence on my career.

We did our first tech rehearsal and I got chills hearing the segue music and watching these broads in action.

Do you think you’ll ever hang up your wig?

I get asked that a lot — mostly from queens who want my gigs. When I think about it, my thoughts are 'Why would I?' Entertainers are performers for life — it's what keep us going in this boring life of work and bills and responsibilities. I may not always be in a wig, but I'll always want to make people laugh. I have been doing a lot of comedy clubs the past two years, on stage as myself, not as Brittany, and as long as the crowds keep laughing, I'll keep doing what I do. Plus, I'll be playing Mortimer Duke in the upcoming musical 'Switched' in the Fringe Festival — Gilbert and Sullivan mock-opera based on the movie 'Trading Places.' Which has also opened up the door to me going back to my theater roots.

I never thought I would still be doing drag in my 40s, but more and more amazing opportunities are given to me each year. I live a blessed life. I worked hard for it — as all queens do. We give up free time, holidays and mostly having a personal life to keep you kids smiling and twirling. But now, me and my girls can say proudly that we lead the city's biggest parade every year, the Mummers Parade, in the eye of the mainstream community, and they love us. It's great for our LGBT community and I am so thankful for that opportunity. I get to work closely with our city's mayor as 'the First Lady' and I recently signed on with a great promoter who books me for casino and concert shows. There's a lot more great things coming up. At this point of my life, who would have ever thought I would have opened up for friggin' Debbie Gibson? I shared the stage with Lance Bass at the Pink Pub Crawl, and he sang 'Bye, Bye, Bye' on my Instagram! And two weeks ago I opened up for Big Freedia. My inner teen self is wetter than spring just thinking about what I get to do for work.

My life is gay! And getting gayer every day. And who would want to give up stuff like this? I'll probably sing at my own funeral ...