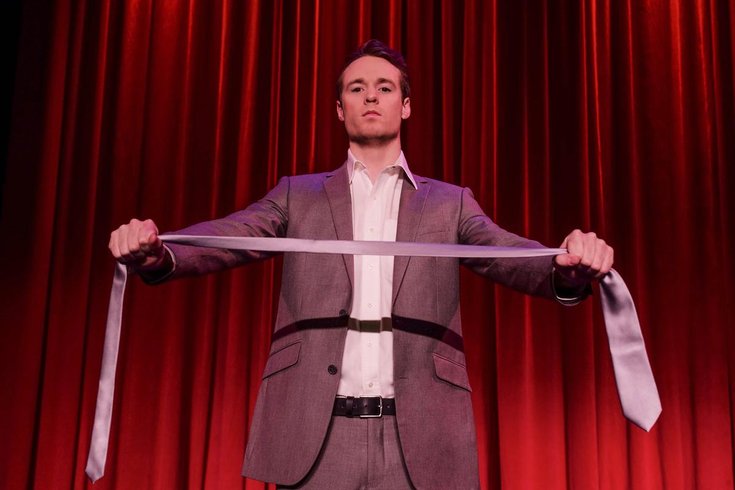 Ken Neely performs as the hunky star of the SNL-meets-"Fifty Shades of Grey" parody show, "SPANK!"

Ken Neely is billed as the leading "hunk" -- aka, fill-in for Christian Grey -- in the "Fifty Shades of Grey" parody performance, "SPANK!" -- a traveling seven-week comedy brought to Philadelphia by the Kimmel Center. "SPANK!," with all its raunchy humor and kinky flavors, will run as a one-night-only performance March 3 at Merriam Theater. Here, the show's 26-year-old Romeo-with-handcuffs dishes on rehearsals, rabid meet-and-greeters and, of course, spanking.

Who’s the man behind the hunk?

I've heard from a few ex-girlfriends, ‘Of course you get this role, of some sex-crazed billionaire man.’ I guess they look at me as having a similar reputation -- some of the toys played with, I’m pretty familiar with them. [Laughs] In a lot of ways it was typecasting, but it’s such a bizarre character to take on, because he’s so eccentric. And you know, who’s a 27-year-old billionaire who owns a jet and happens to be a bit of a stalker? That it lends itself well to comedy fits me well, because I’m a pretty goofy kid. Born and raised in a small town taking drama classes. I was always an eccentric kid. I get to play that, and I also get to be a tease and take my shirt off. Surely, best of both worlds, for me.

How much blushing did you do during those first rehearsals?

[Laughs] You know what, I’m a pretty non-prude person to begin with, so it was all pretty much in my wheelhouse. But the girl, she blushed quite a bit – she’s young, around 21, and everything was new to her. So I had more fun watching her squirm than actually blushing myself.

Do you come into the role feeling like you need to fill the big shoes of Christian Grey?

In the first week of rehearsals I had anxiety every night, thinking, How am I going to do this? Women love this character – they have this guy put on a pedestal. But immediately when the show opens, it’s this sort of burlesque walk-down, and the audience is immediately screaming. They love the person, whether it’s me or some other tall guy. The immediate reaction is to just love him; he’s taken them on such a journey already -- they’ve read all three books, and know everything about us. There’s an established relationship, which is nice.

What’s the craziest question someone’s asked you after the show at a meet and greet?

Oof. That'd be ‘Where’s your hotel room?’ They get bold. They feel like they know you, so it’s very familiar. Some of it gets pretty grabby and gropey, but it’s all in good fun. You can’t take it personally. But a lot of them are like, ‘So what are we doing tonight?’ And I’m just like, ‘Uh, sleeping! I have to be on a plane in four hours!’”

Has anyone asked to be spanked?

Yeah. That’s sort of our second go-to pose [at meet and greets] – we take a nice photo, and then a naughty one. And someone’s getting spanked, whether it’s them or me. But sometimes we do get a group, and they’re like, ‘On your knees.’