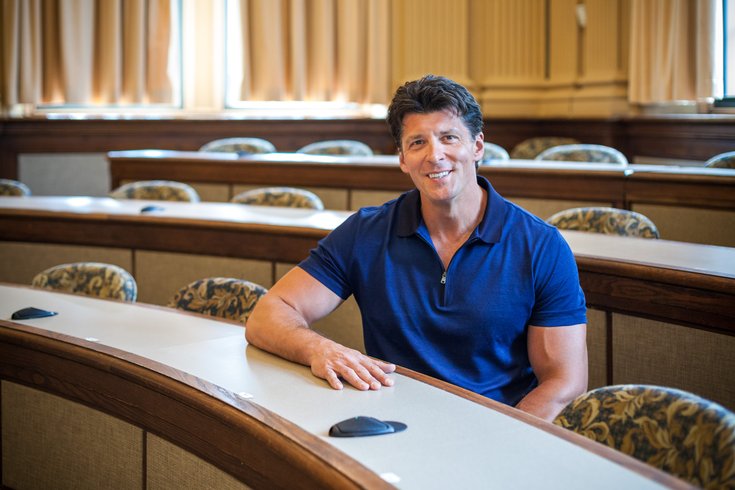 Rob Mitchell, president of the Philly Mobile Food Association and owner of the Cow and the Curd food trucks, poses before a PMFA meeting.

Rob Mitchell is president of the Philly Mobile Food Association, which advocates for food trucks and carts in Philadelphia. And when he's not championing the right to eat kimchi tacos, kebabs and all the like on the street corner, he's selling his famous cheese curds out of his own food truck, the Cow and the Curd — which, fun fact, has now gone wholesale. That means you can indulge in those cheese curds at restaurants like Paddy Whack's Irish Pub, Taproom on 19th, the Draught Horse, Hotel Sofitel and other eateries around town.

What is the PMFA working on right now?

We recently launched our Healthy Food Truck Initiative — a collaboration among the Food Trust, the University of Pennsylvania and the PMFA. Creating a community of food trucks whose menus showcase nutritious, health-conscious offerings is our goal. Prospective trucks undergo an application screening along with a series of interviews, during which a determination is made as to whether they qualify. Those who meet the criteria become 'Certified Healthy' — receiving official documentation and a nifty sticker to boot. It's a truly exciting campaign that further validates the notion that high-quality, healthy cuisine is produced by food trucks.

I recently took a trip to Austin, where I was delighted to see food trucks open at 2 a.m., waiting for me after the bars let out. Any progress toward making that happen here?

Before we start campaigning for late-night vending privileges, we need to get Center City streets opened up to food trucks during the day. Since legislation is already in place to support 'food truck pods' (areas dedicated to food trucks, much like one sees in Austin, Portland and L.A.), the PMFA aspires to see several pods created throughout Center City that would support small business growth for food trucks and offer more choices to consumers. Seeing that goal realized would put Philadelphia's food truck culture at the avant-garde of progressive-minded leadership on a national scale.

What’s your favorite food truck that’s not your own?

That's as tough of a question as asking me to name my favorite Rolling Stones song — it depends on the time, place and situation. But if forced to choose ... when I'm in the mood for BBQ, it's Baby Blues or Oink & Moo; if it's taco time, then it's undoubtedly Taco Mondo; should I have a guilty pleasure hankering, then a cupcake from SweetBox it is; and for a post-workout shake or healthy green drink, Robeks.

How do you kill time on a slow day? Read a book? Play a Gameboy?

With two small children, a growing business and involvement with multiple food truck associations, free time is hardly a commodity I possess. However, being a lifelong fitness zealot, gym time is something that prioritizes its way into my schedule five days a week. Hot power yoga is another passion I've developed in recent years, though lately it has taken a back seat to my weight training and cardio workouts.

Have you had the cheese curds at Bud & Marilyn’s? How do they stack up?

Of course, I've had them ... and they're delicious! How could they not be — they're fried cheese curds! Since you asked, it's the difference between lightning and a lightning bug.