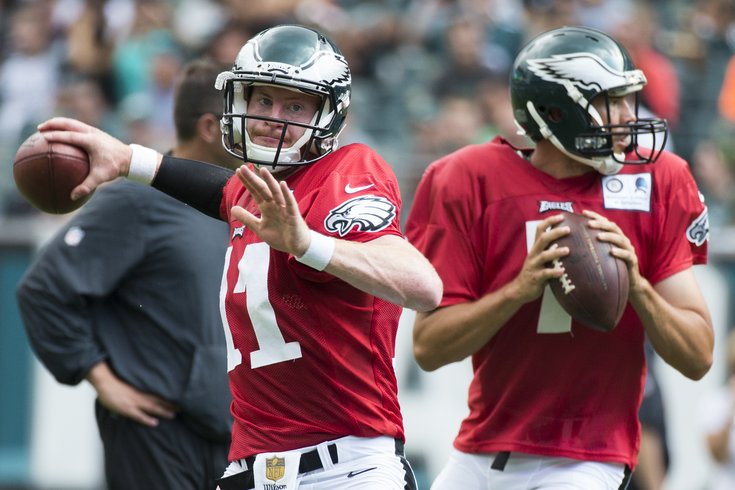 Ready or not, football returns to Philadelphia on Thursday night as rookie head coach Doug Pederson and the Eagles open their preseason schedule against the Buccaneers at 7 p.m. at Lincoln Financial Field.

As hard as it is to believe, there are more question marks surrounding this team than a year ago, but we'll start to be able to answer some of them following the game. What we'll need to be careful to avoid, however, is putting too much stock into preseason results, especially after the crash-course in hope-dashing we received in Chip Kelly's final season.

But that doesn't mean this game won't tell us a few things about Pederson, his system, and the team at large.

Oh, and some kid named Carson Wentz is going to be making his debut.

Just like we did before each game last season, let's take a look at five things to keep an eye on in the preseason opener in the form of over-unders. Because if football season is back, so is gambling season. And while I'm not going to be taking any action on these -- and don't get anything if I nail my prediction -- feel free to disagree in the comments section and we'll see where we stand on Friday morning.

Call me crazy, but I've got a feeling Wentz is going to play well against the Bucs third-string defense. As the No. 2 pick in the draft, that should be expected, but don't forget that he'll also be playing alongside the Eagles' third-stringers as well. Basically, Wentz should be, by far, the best player on the field. And if that's the case, it's hard to imagine he'll be kept out of the end zone the entire night. Plus, a good showing by Wentz drives fans crazy, especially if Bradford and the first-team offense go three-and-out to start the game.

I'm taking the under here, but only because Pederson's offense seems like it's much more willing to run the ball in the red zone, and that means fewer chances for the rookie to throw the ball in the end zone. Also, he's going to be throwing to guys named Paul Turner, David Watford and Hunter Sharp. So, yeah, that's probably not going to work in Wentz's favor. If you're asking me how many touchdowns the Eagles score with Wentz in the game, then I'd take the over. But since we're strictly talking about how many he throws...

Should you be upset -- or even surprised -- to see Wentz throw an interception in his first NFL game? Hardly. But if it comes on his first drive or, god forbid, his first series of downs, fans might start to get a little restless. And while you may think that's a bad thing, it would actually allow an early look into the psyche and mental toughness of Wentz. How will he respond on the next series? Will he avoid making the same mistake again? Or will a bad start unleash turn a snowball into a full-on avalanche and derail the rookie's entire debut? The answers to all of these questions are more important than whether or not the rookie turns the ball over.

He's a rookie. He's going to throw interceptions. What happens in the immediate aftermath will likely tell us more about the QB than anything else.

We almost never had to worry about these under Kelly, mainly because his offense only ran at one speed -- fast. Delay of game penalties were basically nonexistent and the Birds almost never wasted a timeout, something that seemed like a weekly occurrence during the Andy Reid era. But, according to our own Jimmy Kempski, the Chiefs wasted 16 timeouts in 2015 and the guy responsible for calling the plays in Kansas City was none other than the Eagles current head coach.

With that in mind and the fact that it is only the first preseason game, I'm willing to cut the first-year head coach some slack if he has to waste a timeout or if his team takes a delay of game penalty. It'll be problematic, though, if those mistakes carry over to next week's game.

Percentage of Eagles' plays that are passes: 50

Last season, Pederson's Chiefs offense had a pretty even split between run and pass plays, throwing the ball just 52 percent of the time. It will be interesting to see if that balance carries over to Philadelphia, but we may not be able to truly assess that until the regular season opens. With Wendell Smallwood out, Ryan Mathews coming back from an ankle injury and veteran Darren Sproles not really needing the preseason reps out of the backfield, we could see a more pass-heavy attack from the Eagles on Thursday night.

After all, with rookie pick Carson Wentz expected to play most of the second half, isn't that what everyone really wants to see anyway?

Sacks by the Eagles defense: 2.5

Defensive coordinator Jim Schwartz has brought the wide-nine back to Philly, along with an aggressive style of defense that should fit the Eagles front seven nicely. Sure, the starters won't be playing deep into the game, but that doesn't mean Schwartz's lesser players won't benefit from his system as well. If Jameis Winston was going to be under center the entire game, the sacks might be harder to come by. However, he's not, and Mike Glennon and Ryan Griffin will split the bulk of the snaps. They're just slightly less mobile than the No. 1 overall pick from a year ago.