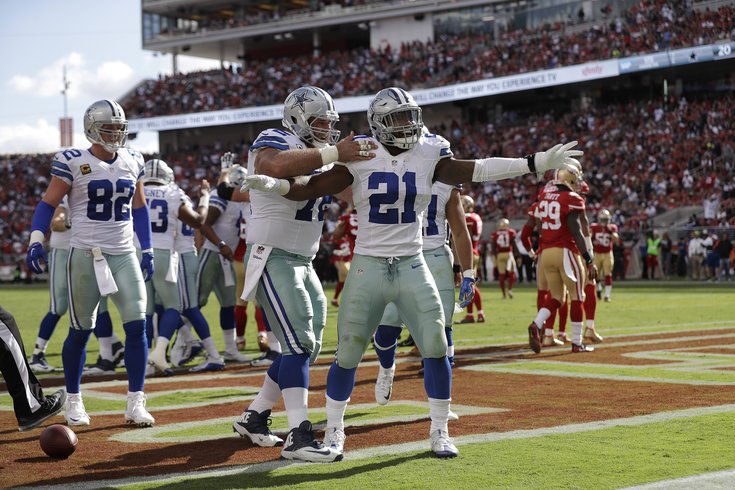 We’ve reached the conclusion of Dallas Week and in a few hours, all our predictions and prognostications can be thrown out the window as the Cowboys and Eagles battle for first place in the NFC East … in primetime.

It doesn’t get much better than that, does it?

We’ve already outlined our predictions for the final score, as well as some matchups to watch, but now let’s take a look at five numbers that could make a difference when rookie quarterbacks Carson Wentz and Dak Prescott take the field at Jerry’s World on Sunday night:

That's currently the line being offered over at topbet.eu, and it matches up almost exactly with what I see the final score being when the dust settles Sunday night. I predicted a 23-20 win for the Eagles -- I was feeling pretty optimistic at the time -- but both Jimmy Kempski and Rich Hofmann see it hitting the over by at least three points.

Based on the two offenses we're going to see on display, it doesn't seem like it should be a problem; both are ranked in the top 10 in the NFL in points per game. But there's a catch -- they both also rank in the top 10 in terms of points allowed, something the Eagles have been able to do thanks to turnovers and strong play by the defense. The Cowboys, on the other hand, have been able to limit the exposure of the defense by going on long sustained drives that chew up the clock and don't give their opponents many chances score.

Something's gotta give on Sunday, and I have a feeling that my 23-20 prediction may wind up being way too low.

After not throwing an interception through the first three-plus games of his NFL career, Wentz now has three in as many games, including two last week against the Vikings. If the Eagles want to take over first place in the NFC East, they're going to need their rookie quarterback to go back to his old ways of protecting the ball. Luckily, the Cowboys have just four interceptions over their first six games, so there's not a ton to worry about in that regard.

However, the Birds turned the ball over four times a week ago -- they only had two total over their first five games -- and that's not going to get the job done against Dallas. Unless you think the Cowboys are going to return the favor with four turnovers of their own. One, and the Eagles will probably be alright. Anything more, and it could be a long night for fans in Philly.

Elliott is currently averaging 117 rushing yards per game. And that's bad news for the Eagles, who rank 24th in the league with their 4.5 yards per carry allowed. What's worse for Jim Schwartz and his defense is that they will be without Bennie Logan, the team's best run-stuffer up the middle. Sometimes, when all the signs point to one area being troublesome, it actually winds up being a non-factor because a team overcompensated to make sure to account for one guy, in this case, Elliott. Unfortunately, I don't see that happening in this one.

Another way the Birds could limit the NFL's leading rusher is by jumping out to an early lead and making the Cowboys rely on Prescott and the passing game, something that they haven't really been asked to do much this season.

If Kirk Cousins did this...

Kirk Cousins picked up a first down on this play. This was a key third down. This should embarrass the #Eagles pic.twitter.com/qFIH745fBq

This was one of the bigger plays of game. Bradham whiffs on Cousins, gives him a first down. #Eagles have really regressed with tackling pic.twitter.com/NdbIiqroku

... then what the hell is Dak going to do against this defense? With so much focus on Elliott, the return of Dez Bryant, and even Cole [bleeping] Beasley, the Birds better not forget that when a play breaks down, Prescott can still burn you with his legs. They haven't looked great against quarterbacks who aren't total statues in the pocket, and that's worrisome.

The Eagles are 3-0 this season when their defense has two or more turnovers. They're 1-2 when they have one or fewer, with their lone win coming in Week 1 against the Browns. The Cowboys don't turn the ball over much, but the same could be said about Sam Bradford and the Vikings before they coughed it up four times a week ago. If the Eagles want to avoid falling to 0-2 in the NFC East, they're going to need to come up with a key turnover or two. Otherwise, it's going to be a healthy dose of Elliott all night, and that won't end well for Doug Pederson's team.