Because you can't always eat the same thing 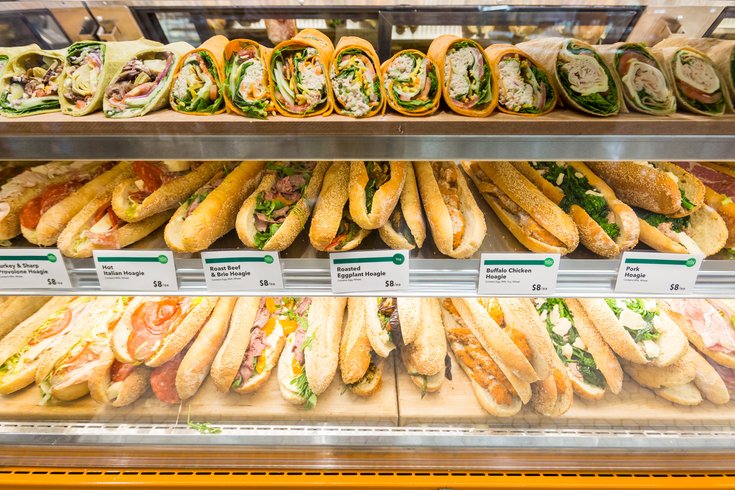 This file photo from October 2016 shows sandwiches at the deli counter display inside the Whole Foods Market in Philadelphia's Spring Garden neighborhood.

For all the pride Philadelphia takes as the birthplace of the cheesesteak, our signature indulgence really isn't the be-all-end-all of the local sandwich universe.

Whether you're a Philly-area resident or a visitor, yes, you'll always have an abiding friend in the cheesesteak. It's as perfect a safety blanket as any city could wish to claim as its own. Just don't let it keep you from exploring some of the other great specialty sandwich options you can find around town.

Here are five of Philadelphia's must-have sandwiches — that are not cheesesteaks.

The Schmitter at McNally's Tavern

Take away traditional cheesesteaks and The Schmitter is undoubtedly Philadelphia's most famous sandwich. Sure, they're now popularly sold at Lincoln Financial Field and were available for more than a decade at Citizens Bank Park, but if you want a true Schmitter experience, you should go to McNally's. Legend has it that owner Hugh James McNally invented The Schmitter for his friend Dennis Krenich, aka Schmidter, because he would only drink the local beer Schmidt's. It was so delicious that other regulars and patrons started requesting it for themselves.

The ingredients are pretty straightforward: sliced beef and grilled salami with tomato, fried onions and a cheese of your choice on a flash-broiled Kaiser roll. But the thing that really sets The Schmitter apart is the Thousand Island dressing, a spread that brings together a mix of tangy and savory flavors that'll force you to eat your sandwich slowly, with beers of joy.

It's so easy to fall into a breakfast sandwich rut with McDonald's or Dunkin' Donuts or just take the DIY approach. You think you're happy, and sometimes you are, but you know you can treat yourself to something better.

Res Ipsa is a relative newcomer in Philadelphia, but the place was already named one of Bon Appétit's best new restaurants in the United States. Much of that distinction owes to their breakfast sandwich, served on a house-made English muffin. The frittata with Asiago fresco and herb long hot spread is a work of art. Add spinach, fennel cardamom breakfast sausage and bacon and you'll be in for an unforgettable experience.

Perfecting great sandwiches is often about finding the right twists and variations on the classics. After a long run with duck meatball sandwiches, High Street on Market recently switched it up with the smoked duck cubano, already a local favorite that delivers a punch. Young Swiss from Lancaster, fermented mustard and pickles accompany the duck confit on a crusty house sesame roll.

RELATED: Philly's best late-night food, according to 9 restaurant workers who would know

Also popular at High Street on Market are the pastrami on rye — cabbage slaw, Russian dressing and Gulden's mustard — and the herb-centric Sherwin's turkey sandwich.

The choice here is a toss-up that will never let you down. Tommy DiNic's original roast pork sandwich enjoys the title of the Travel Channel's best sandwich in America, while John's Roast Pork is built on a family legacy that stretches back to Philadelphia in the 1930s.

Either way, the great thing about roast pork sandwiches is that they're only a stone's throw away from cheesesteaks. They bring on the same ravenous anticipation, but they offer a stockier flavor, with gravy soaking into the cheese and the roll. At both of these spots, you also have the option to get a meatball sandwich or an Italian sausage sandwich, among other choices that have kept people coming back for decades.

Garlic Bomb at Jake's Sandwich Board

If you're looking for a bad pun explosion of flavor, look no further than Jake's Sandwich Board for a menu driven by all kinds of brisket concoctions, including a brisket "cheesesteak," if you plan to stick to your guns no matter what. But if you want the real prize, you'll have to go to Jake's "secret" menu.

The Garlic Bomb is a brisket-ball sandwich packed with roasted garlic, sautéed garlic and deep fried garlic cloves, plus a melted cheese that brings it all together as any great hot sandwich must. It's a heavyweight. Both the Travel Channel's "Food Paradise" and The Food Network have taken visits to Jake's to give this monster a try. The heartburn is well worth it.

Do you have a favorite Philly sandwich other than the obvious cheesesteak? Let us know in the comments below or reach out on Twitter or Facebook.