Five reasons to love and fear Puddles the Clown

What you need to know before Puddles' Troc performance on Friday 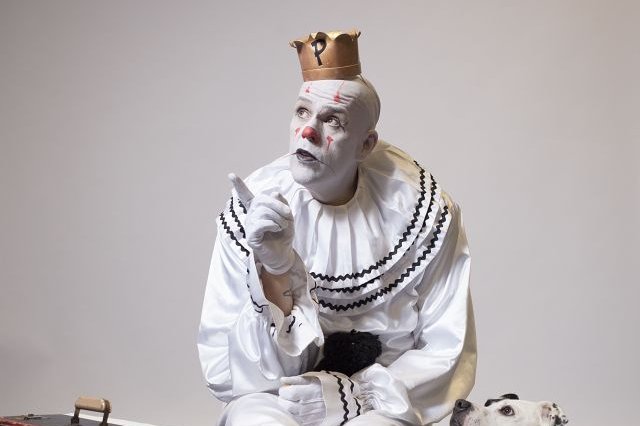 The first time I saw Puddles the Clown (L.A. performance artist “Big” Mike Geier), he was leaping off the stage at the Troc to get up close and personal with his audience. This was a sit-down show — he was opening for the travelling version of Aqua Teen Hunger Force — so the floor was lined with folding chairs. He flung them away with a swipe of his massive, gloved paws. He hugged people whether they wanted it or not. He grabbed a guy and kissed him full on the mouth before tossing him away. Most impressive and off-putting? Puddles never stopped singing. Since then, Puddles has become something of a viral hit, thanks to videos of him doing Lorde (below), Sia and Coldplay. When it comes to engaging, reimagined covers by a clown, Puddles wears the (tiny) crown.

Here are five reasons you should love and fear Puddles the Clown.

About seven feet tall, by most estimations. When he leaves the stage to wander among his fans, they are consumed by his shadow and his unbreakable embrace.

Whether it’s rock, metal or pop, Puddles can hit the notes with gorgeous, alarming clarity — all while maintaining his morose poker face.

3) Puddles is one of those rare clowns who accepts his place in the universe.

In the post-Pennywise world, all clowns who think they are not scary are fooling themselves. Puddles embraces the creepy implications of his profession. He never speaks. He never smiles.

4) He never, ever breaks character.

Don't even try to get him off his game.

5) He and his band, Puddles Pity Party, put on a really fun show.