Flyer for religious festival sounds alarm for some in Camden 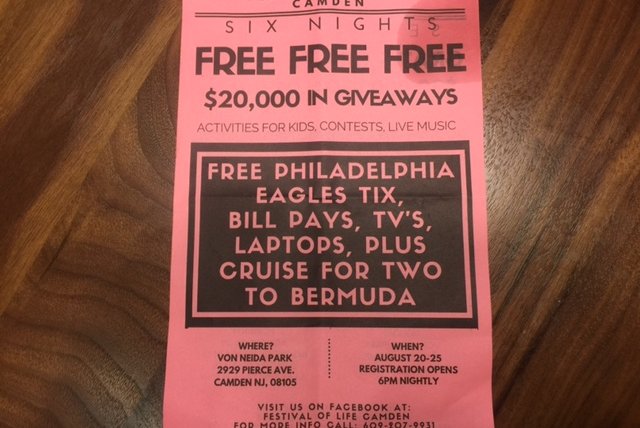 A flyer distributed in South Jersey alarmed some. The handbill purposefully hides the fact that it is part of an evangelical festival.

The promotional flyer distributed around Camden and plastered on cars parked at PATCO stops in South Jersey sounded suspicious.

In smaller print at the top, and easier to overlook, the words "Festival of Life, Camden."

Some expressed concern that it might be a human trafficking come-on.

The giveaways are part of a six-day evangelical religious festival – though that is not made clear on the handbill – scheduled from August 20 to 25 at Von Neida Park in the city's Cramer Hill neighborhood.

The religious connection was left out by design, according to the pastor of a Camden church allied with the event.

The flyer, which is repeated in Spanish on the obverse side, lists a phone number – 609-207-9931 – and a reference to Festival of Life Camden on Facebook.

But nowhere on the handbill is the purpose of the Festival of Life or its relationship to the promised giveaways disclosed.

'WE WOULD LOSE PEOPLE'

The giveaways, that lack of basic information and the fact that a white van slowly cruised Camden neighborhoods distributing the flyers set off alarm bells for some people. Some called the county parks department, others posted on social media.

Juju Judy Duran, a former city resident with family still in Camden, and Maria Montero of Camden both posted on social media that they believed the flyers sounded like a way of recruiting human trafficking victims – an ongoing issue in South Jersey.

“Next time maybe make the flyers a little bit more informative so as to not alarm the community... many believed these flyers to be a scam linked to human trafficking!” wrote Duran.

“I just think ppl got alarmed not so much because of the flyer but a van downtown that said free something so ppl thought the van was driving around trying to kidnap girls,” Montero posted.

A response to the women’s posting on the Festival of Light's Facebook page acknowledges the “confusion” created by the flyer. “This is why we made this video,” continues the posted response, which is labeled "TRUTH TRAFFICKING!!"

“Unfortunately, there is only so much information that can be divulged on a flier. This is why we leave a number and FB page info on the bottom, so that people can connect to the event better,” states the Facebook post.

The speaker in the video, Stephanie Esposito, repeated the same points in an interview with PhillyVoice. The Philadelphia resident is in charge of communications for Festival of Life.

But Israel Lugo, the pastor of the local church which actually made the permit application, told PhillyVoice details about the event being a Christian revival meeting were withheld – intentionally.

“We leave it out because we would lose people,” said Lugo, the leader of Iglesia Fuego Celestial, a Camden pentecostal church a few blocks from the park.

Lugo's church applied to the county for an event permit even though the revival will be staged by the Festival of Life organization, not the local church, the pastor acknowledged. The application uses Lugo's name and his church's address, but also lists Revival Today as the organization, but provides no further details.

Festival of Life is itself an offshoot of Revival Today, an evangelical ministry based in a suburb of Pittsburgh run by second-generation evangelical preacher John Shuttlesworth.

The preacher, who often sermonizes on end-of-time themes, has spoken out against homosexuality and has claimed the Holy Ghost cured him of ailments, including a speech impediment. He is the author of several books and appears in videos about gospel, marriage, finances and prayer.

As well as selling DVDs – Revival Today and Festival of Life both have extensive online stores – Revival Today has been on TV since 2013. His web site claims 20 million viewers see him across the American and in Africa.

He has held Festival of Life revivals twice in Philadelphia, in Nicetown and Kensington.

Shuttlesworth made waves after entertainer Robin Williams, who had Lewy body dementia, an aggressive form of Parkinson’s Disease, committed suicide.

Shuttlesworth told a packed congregation that the actor hung himself because he did not have “Jesus living” in his heart.

A message seeking an interview with Shuttlesworth went unanswered on Monday.

Guidestar, an online database of IRS 990 filings by tax-exempt organizations, put Revival Today's receipts in the most recent tax year on file at more than $1.8 million with assets of close to $300,000.

Lugo said the county waived the $150 fee for the event permit at the park.

The waivers are granted by the head of the county's parks department, Frank Moran, who is likely to become Camden's next mayor as a Democrat in an overwhelmingly Democratic city.