Flyers inch closer to Boston after comeback win over Blues 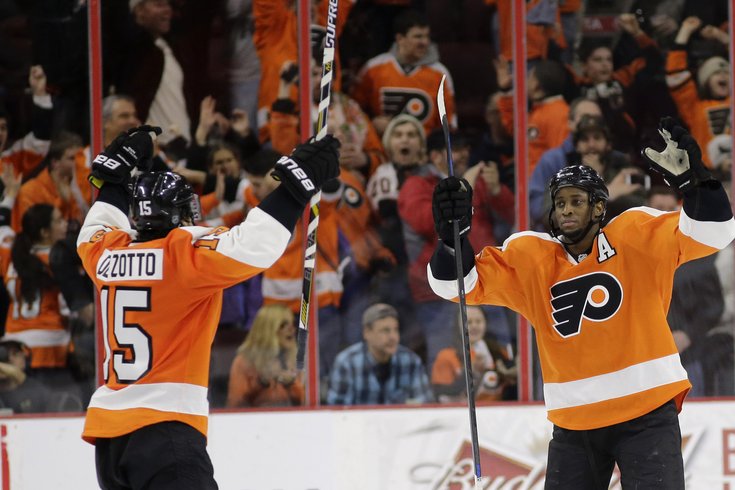 Well, the Flyers are at it again.

A team that has been plagued by inconsistent play for much of the season -- both at the micro and macro level -- put that on full display Thursday night at the Wells Fargo Center, beating the St. Louis Blues, 3-1, thanks to three goals in the final 11 minutes of the game.

It's been infuriating to watch, seeing the Flyers get the better of some of the best teams in hockey, yet failing to get two points from the teams you'd expect, the ones below them in the standings. Their strong play against the NHL's top teams only makes the losses that much harder to comprehend ... and stomach.

They've put together stretches where you wonder why they aren't near the top of the Eastern Conference, only to follow that with a few duds, the kind where you can't believe this team is still in the playoff hunt.

For now, they are. But that could change Saturday against the Bruins. In fact, there's been a lot of that lately when it comes to the Flyers' playoff hopes.

Lose to Columbus. Lose to Buffalo. Both at home. Okay. They're done.

Beat the Predators and Capitals. Maybe they're not.

Fall to the Hurricanes. And then the Maples Leafs. For real this time. It's over. At least "House of Cards" drops Saturday.

Beat the Rangers for the first time all season. Not so fast. Wait did they just trade Braydon Coburn? Will you make up your mind already?

Okay. A home loss to the Flames in overtime. That one actually makes sense.

As inconsistent as their overall play has been, the Flyers in-game play has been just as uneven. In their loss to the Flames, they put themselves into a 2-0 hole before finally making a late comeback attempt, one they ultimately couldn't finish.

All of that brings us back to Thursday night, where the Flyers fell behind early, looked out of it for most the game, and yet somehow found a way to dominate the games final 15 minutes so soundly that they outscored the Blues 3-0. That's the same Blues team that has the third-most points in the Western Conference (85).

So how did it all go down? Here are some observations from the Flyers' 3-1 win over the Blues:

Mark Streit didn't get off to a great start. In the first period, his costly turnover in the neutral zone -- it ended up on the stick of the dangerous Vladimir Tarasenko -- led to the Blues' only goal of the game.

Then a few minutes later on a Flyers' power play, Streit turned the puck over twice in the offensive zone, both of which resulted in the Blues clearing the puck the length of the ice. He'd make up for it later in the game...

In addition to the sloppy play, there were missed opportunities. Including what could should have been a game-tying goal:

Finally saw replay of Umberger miss in first period. On doorstep, entire net in front of him, no goalie near ... off post, off crossbar.

Especially against this team, you do not want to come out sloppy. Let me rephrase that: You do not want to be playing from behind. And even though it wasn't as bad as how they started the Flames game, the Flyers found themselves trailing 1-0 after 40 minutes of hockey.

This team does not like following the rules. They're not supposed to win this game. Not this way, at least.

Somehow, they were able to turn it on in the third, score three goals, and send the Blues to the airport with nothing to show for their effort.

But it was more than a late offensive outburst that helped them defy the odds.

Somehow, this team found a way to do all that. And the goals, well, they followed.

First, it was Michael Del Zotto, who is closing in on his career-high* of 10 goals, with a laser that looked like it might have nicked the crossbar on its way past Blues goalie Brian Elliot.

*Isn't it about time the Flyers re-sign him?

The game-winning goal, which came off the stick of Wayne Simmonds with 8:23 left in the game, was set up by none other than Mark Streit, the man almost singlehandedly responsible for the Blues' lone goal.

Michael Raffl added the final tally, an empty-netter, with just over a minute left to play.

For a second, it looked like Flames winger Johnny Gaudreau, who grew up a Flyers fan, was going to help his hometown team inch closer to catching the Bruins for the final Eastern Conference wildcard spot. In the third period of their game against Boston, Gaudreau scored to give his team a 3-2 lead.

Unfortunately, the Bruins tied it up and sent the game to overtime, guaranteeing them at least a point. However, that's all they would get, as the Flames scored in the eighth round of the shootout to steal the final point.

Now, the Flyers are four points back heading into Saturday's game in Boston.

The Flyers also picked up a point on the Panthers -- they fell to the Stars, 4-3, in a shootout -- and are now just two points behind them.

Worth the price of admission

I'm sure most of the 12,531 in attendance Thursday night had already purchased tickets before the Flyers started offering free tickets to anyone who took Septa to the game. Don't worry. They made out just fine, getting to enjoy a Flyers win while feasting on free hot dogs, pretzels and soda refills.

As our way of saying thanks for coming out tonight, enjoy free hot dogs, pretzels, and soda refills! #STLvsPHI pic.twitter.com/FhZWM2uAuX

After the first period, there some doubt...

"We're pretty much trash, have a free hot dog."

...and some lines, as you would expect.

Hopefully everyone got home safely.

Per @gblockus, Shayne Gostisbehere has been shut down for the year. Will not play a game the remainder of this season.

Dave had an update after the game, which included Hextall saying no final decision has been made on the Flyers prospect:

Hextall says final decision on Ghost has NOT been made. He's not sure why Murray was so definitive.

Gostisbehere has a doctor appointment here in Philly in two weeks, which is when more will be known about shutting him down.