Can the Flyers actually catch Bruins and make playoffs? 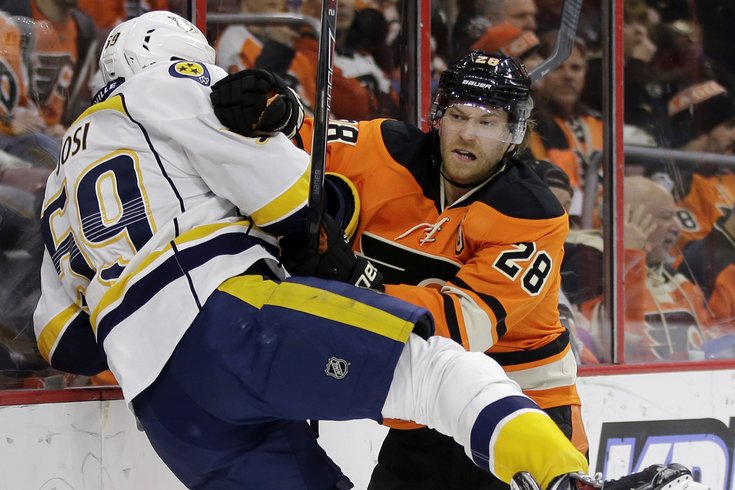 If you want to win the lottery, you have to make the money to buy a ticket.

Whether you've watched the movie "Nightcrawler" or not, you've probably seen or heard Jake Gyllenhaal's character say that line. The commercial has been running non-stop lately.

They head into action Tuesday night against the Hurricanes with 22 games left to prove they deserve that lottery ticket, a spot in the Stanley Cup Playoffs.

And when jockeying for position in the postseason, the currency needed to buy that ticket is points. The Flyers, unfortunately, don't quite have enough capital ...yet.

They're currently four points behind the Boston Bruins for the final Eastern Conference wildcard spot and one point behind the Florida Panthers. When you consider the fact that they've gained nine points* on the Bruins in their last 13 games, four points over 22 games doesn't seem like that difficult a task.

However, the last few points are often the hardest to get, and with only one game left against the Bruins, the Flyers will need  some help from other NHL teams along the way. It won't be easy, but it's not impossible.

Perhaps that's why an email arrived in my inbox this morning from the Flyers, telling me that if I want to guarantee playoff tickets this year, I need to sign up for 2015-16 season tickets: 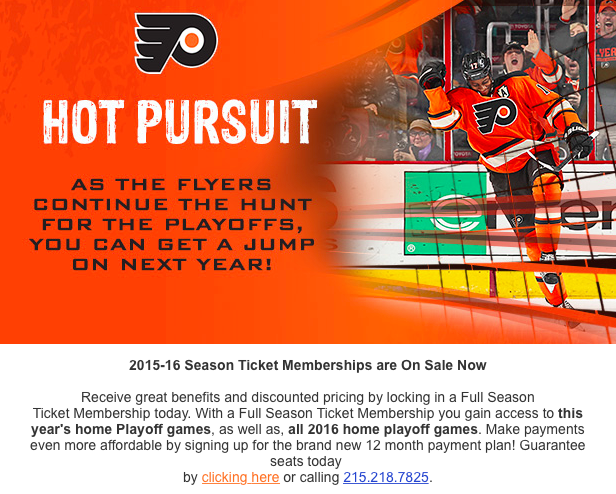 So in realistic terms -- ones that you can wrap your head around -- what do the Flyers need to do to catch the Bruins and make the postseason?

According to sportsclubstats.com -- a site that offers comprehensive, number-driven analysis about a team's chances to make the postseason -- the Flyers currently have an eight percent chance of making the playoffs. With a win vs. the Hurricanes Tuesday night, that would increase to 10.5 percent.

Here's how their chances have changed over the course of the season: 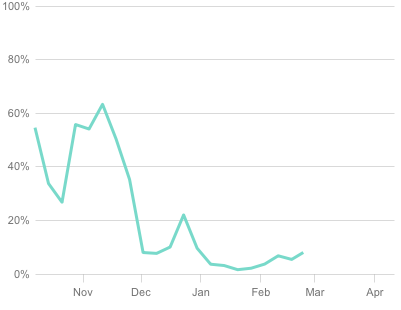 The number most teams use as a demarcation line for the playoffs is 95 points. About a month ago, it seemed as though 100 points would barely be enough to make it in the East, but because Boston has struggled lately, it's looking more and more like the final Eastern Conference team will have a more traditional total.

So how many points will the Flyers finish with? They're currently projected to finish with 89 or 90 points, per sportsclubstats.com.

That won't get it done.

If the Flyers can get to 96 points, meaning one more win, their chances increase to over 75 percent. Unless Boston completely collapses --their 6-2 drubbing of the Blackhawks Sunday would suggest that isn't likely -- that will likely be what Craig Berube's team needs to do down the stretch.

Here's a look at some other scenarios, what the Flyers' chances are in each, and the best record the Bruins could finish with if the Flyers were to pass them:

In their last 22 games, dating back to early January, the Flyers were 12-6-4. If they were to continue that pace, they would gain an additional 28 points (out of a possible 44) and finish with 91. That would almost certainly leave them on the outside looking in.

However, if you look at just their last 11 games, and use those to project* how the Flyers will finish, they'd go 12-2-8. That would net them an addition 32 points, putting them right on the 95-point threshold.

That scenario seems somewhat unlikely, and not just because of the small sample size. Both teams spent the majority of the season playing the opposite of the way they've played since the all-star break. The Flyers could regress to their mean, and that would all but end their chances, no matter what Boston does.

And not only do the Flyers have to pass the Bruins, but they'd need to pass the Panthers as well. For the sake of keeping this simple -- both for reader and writer -- I decided not to include them.

Can they do it? Certainly.

Getting goalie Steve Mason back as early as Thursday could go a long way to help. Not to mention the fact that Kimmo Timonen, a near lock to be traded to a contender a few weeks ago, could join the Flyers blue line soon as well.

They have a long way to go, and even though Mason is scheduled to return, he hasn't been able to keep himself healthy this season. Add in the fact that backup Ray Emery didn't even travel with the team following a lower-body injury suffered in Monday's practice, and there are plenty of reasons to doubt them.

But there's history proving that the NHL postseason is wide open, often rewarding teams that are hot rather than those that have been solidly all season.

All the Flyers need is the money are the points to buy a ticket...