Folks, I think I found the pop-up strip club City Council talked about 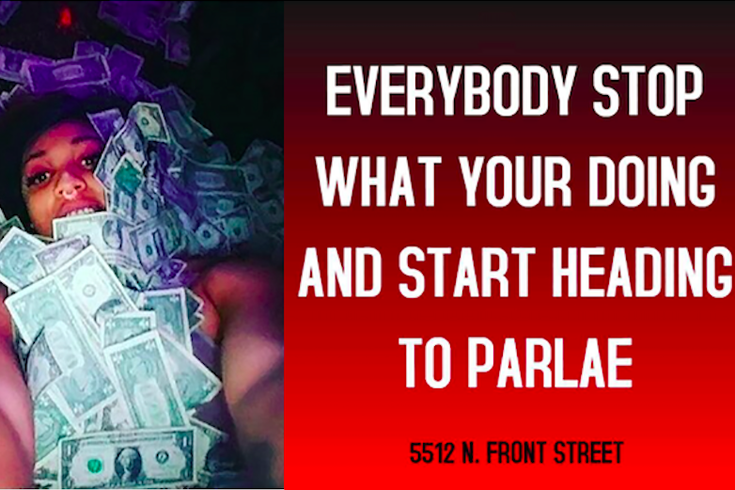 Is Club Parlae at 5512 North Front Street the 'pop-up strip club' referenced at a City Council meeting earlier this month?

This story starts at a May 8 budget hearing in City Hall.

At that Department of Licenses and Inspections session – per a reporter in the room – City Councilman at-large David Oh told those assembled that his office gets complaints about “pop-up strip clubs.”

This was not a naughty play on words.

Rather, he was referring to the sort of events or businesses that set up shop quickly. Think of the pop-up beer and weed gardens that have opened, operated and left without setting permanent roots.

For three weeks now, I’ve wanted to know more about these pop-up strip clubs. It’s not a matter of wanting to stop by. If I were still inclined to do so, established strip clubs are fine.

It’s was a matter of wrapping my head around a foreign concept, so I reached out to Oh’s office for further details. (I was not alone, apparently.)

This week, he alerted me to the fact that, “the police went to the locations and said one visit resulted in seizures of illegal guns and alcohol, and that the location did not have permits.”

He provided an address (5512 N. Front St. in Olney) and a police department contact (a lieutenant in the vice unit).

Police didn’t really want to talk about the raid, though.

A department spokesman confirmed Tuesday that one did, in fact, happen and confirmed the address. He declined to provide further details, including when the raid occurred. Police claimed that sharing more information could interfere with an ongoing investigation.

Well, I drove up to that location – it’s a block from Front and Ogontz and around the corner from the Grover Washington Jr. Middle School – on Wednesday to see if there were any signs of temporary strip clubs. There weren’t (though I wasn't about to go rooting through the Dumpster out back). 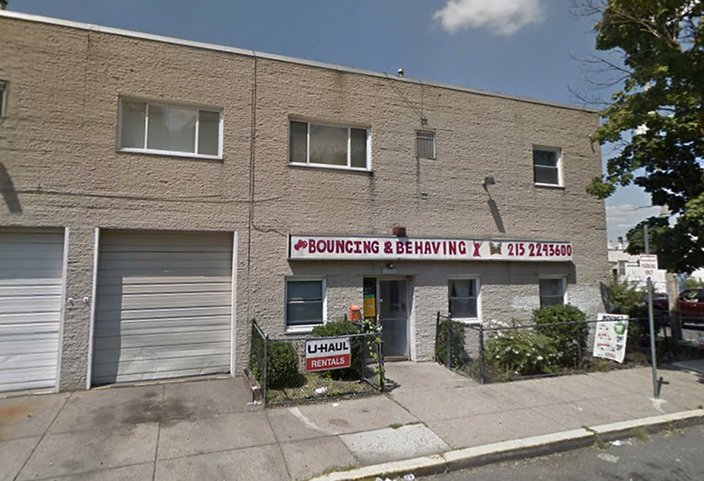 Philadelphia police confirmed there was a raid at 5512 N. Front St. in Olney but would not provide further details, including the date of the raid

I spoke with a neighbor who said she didn’t have any issues with what may or may not be going on at the building up the block, the one featuring the signage that reads “Bouncing & Behaving” Entertainment.

It’s not what you think.

“Bouncing and Behaving Entertainment is a place to plan your private affairs,” reads its pitch. “Indoor and outdoor space. Tell them what you want and let them plan it. … Let us plan your event. RENTAL SPACE AVAILABLE.”

The number posted on the building was disconnected, and nothing seemed to be going on during business hours. (Also listing 5512 N. Front St. as its address is Midlantic Medical Transport, which also featured a disconnected phone number.)

Making matters murkier was the fact that the city’s property lookup page read, “We couldn’t find any address results for 5512 N. Front St.”

A spokesman for City Councilwoman Cherelle Parker said Thursday that her office has no records of constituent complaints about the address either. (Apparently, complainants reach out directly to a city-wide representative).

Where police, politicians and property records fell short, Instagram – specificially the hashtag #BaddiesNight (NSFW) – came through in the end.

Sure enough, there are hundreds of posts regarding an operation called Club Parlae. Most of those posts are not fit for inclusion in a story on a family-friendly website, however.

Many featured announcements for late night parties happening that very day. The most recent post – last week – boasted of parties on Thursday, Friday and Saturday. It urged attendees to just “pull up!” (There was an EventBrite page for last weekend, as well.) 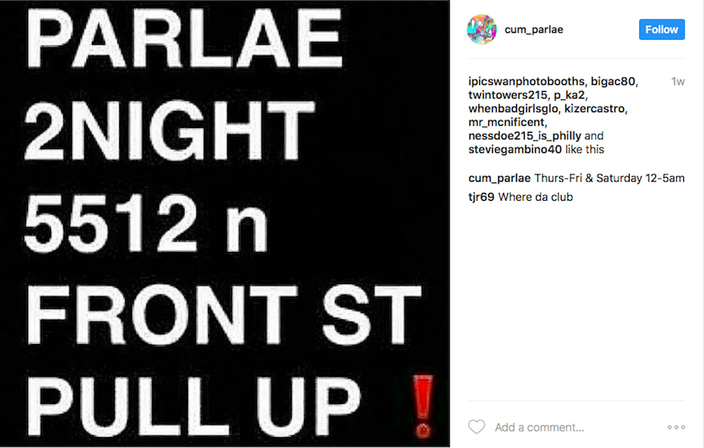 An Instagram ad for a party at Club Parlae last weekend.

There’s even one featuring video and boasting that it’s “the hottest spot that’s open til 5 a.m.”

These posts date back to May 2016, though the older posts told interested attendees to DM for the exact address.

Attempts to reach Club Parlae via email and Instagram direct message were unsuccessful this week. At least one Twitter user has some thoughts on what the Club represents:

There are a few takeaways from this quest for information:

Though police confirm they did raid that address, the parties don’t seem to have slowed down (unless, of course, it just happened last Saturday.)

Much like with the Frankford pot raid, advertising parties where illegal activity may or may not be happening is a good way to get vice cops to show up and raid the party.

Finally, I suppose we’ll have to extend the definition of “pop-up” event to include something that apparently takes place a few times a week.