Between his family discussing parallels to Republican presidential candidate Donald Trump and the Black Lives Matter push to have a statue of his likeness removed from Center City, the late Philadelphia Mayor Frank Rizzo’s name has drawn some attention this week.

So, it’s natural to want to hear what Zack Stalberg – longtime Philadelphia journalist, esteemed editor of the Philadelphia Daily News and former Committee of Seventy president and CEO – makes of it all.

Having moved to New Mexico – which is relaxingly closer to off the grid than Philadelphia – Stalberg shared war stories from covering Rizzo’s first term as a reporter (before moving into an editor's role for the second term). He also noted during a Thursday telephone interview that taking the statue down would unnecessarily whitewash an important time in the city’s history.

“The most fun I ever had as a newspaper person was covering him," Stalberg said. "When Trump first surfaced, I thought that he’s the first and only person I’ve seen since Frank Rizzo who had these characteristics, and not just the mean ones.

"I don’t know what’s stronger than Teflon, but when it comes to their bases, Trump has it the same way Rizzo did, that he could do no wrong.”

Let’s start with the #FrankRizzoDown petition effort, which states “the removal of the Rizzo statue would also remove the constant reminder that our city actively supported a racist demagogue and then immortalized him as someone worthy of honor.”

Stalberg said he’d “hate to see the statue disappear or end up [moved to] the wrong place.” That's not because he doesn't acknowledge the negative aspects of Rizzo's legacy that linger to this day.

“Politicians like this don’t come along too often. Most live by the rules of the game, but these guys don’t have to.” – Zack Stalberg, ex-Daily News editor and former Committee of Seventy president/CEO

Quite the contrary: It's because of what Rizzo represents in Philadelphia history, both good and bad.

“He and [former Mayor] Richardson Dilworth are probably the two biggest figures in public life in Philadelphia in the 20th century,” he said. “His pluses and minuses deserve to be paid attention to. So, you’d hate to see him disappear.

“That said, I always thought the steps of the Municipal Services Building was a slightly goofy place for the statue. So many people have said that he was a larger-than-life character and being on that plaza, the way it’s situated, makes him look small, not big. If he’s going to end up getting moved, I hope it’s a move to a better location, not for political reasons.”

He drew a parallel between the Rizzo statue and the one of a certain fictional boxer who wasn’t exactly welcomed with open arms by the Philadelphia Museum of Art, which initially tried to hide it but ended up seeing droves of visitors seeking it out for the requisite “Rocky Pose” photo. 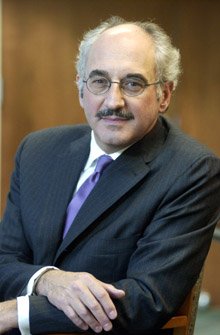 “It needs to be placed where he seems large, not just a small guy walking down the steps and waving,” he said, noting that it shouldn’t be shoved to the side like Rocky, but be centrally located somewhere that an artist thinks works aesthetically. “You just can’t rewrite history, and he’s a big part of Philadelphia history.”

As for the Trump vs. Rizzo debate, Stalberg said “there are some real similarities,” particularly between the former’s presidential campaign and the first several years of Rizzo’s tenure at City Hall “before the lie detector test brought him down to size.”

“He displayed some characteristics that we see in Trump today. With all due respect to his family, because I can understand where they’re coming from, but he was capable of demagoguery, and he was capable of acting like a bigot,” Stalberg recalled. “He was a master of innuendo like Trump. He loved, and might’ve been the first, to regularly make the media a whipping boy in order to distract from the scrutiny of himself.”

Rizzo's daughter, Joanna, told PhillyVoice on Wednesday that her father changed over time, grew as a person. Rizzo did change, Stalberg agreed, but “you can argue whether that was growth or not."

"He became a more life-sized figure, more politic," he said. "By the time he left office after two terms, he’d been knocked around a good bit. [When he sought a return to office], he was being much more cautious and reasonable.

“There was a tendency to ‘pretty up’ Rizzo as time went by. Especially with his sudden death in the middle of a campaign [in 1991] he probably would have won, the image has changed somewhat.”

He also sensed similarities between Rizzo and Trump in how they relate to people.

“He was capable of some bigoted remarks, especially in private, or BSing with reporters off the record. He was a cop in the '40s, '50s and '60s and reflected that era. Sometimes he moderated it, but sometimes he didn’t,” Stalberg said. “Like Trump, or what I hear of Trump, he has the ability to be extraordinarily charming one-on-one and project a completely different image, really appealing to his base when on a bigger stage.

“Rizzo could really empathize with anybody and that connection really came across. Trump can be odious several times a day, but then you’ll hear reports that he’s a really decent guy. They’re both good at balancing those different sides.”

He also drew a parallel between Trump repeatedly fending off stories that would ground other candidacies to the Daily News reports at the time about the then-lavish home Rizzo had built in Northwest Philadelphia on a career of police officer wages.

“Among his supporters, it didn’t hurt him a bit. In fact, it might have helped him," he said. "The base will be with him no matter what happened, no matter what issue, and that’s the same with Trump, even though he might not have a majority of the electorate.

“Politicians like this don’t come along too often. Most live by the rules of the game, but these guys don’t have to.”