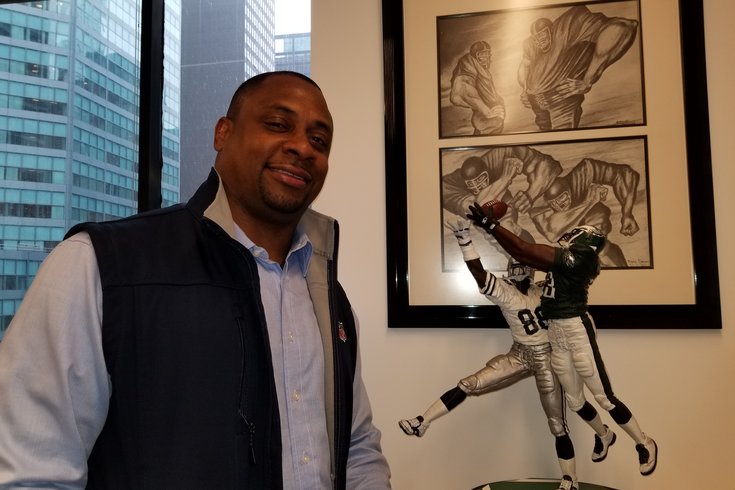 Troy Vincent has a chance to become the first former player, and African American commissioner.

NEW YORK, N.Y. — One of the most powerful people in the National Football League takes the No. 6 train to work from 94th and Third streets every day, usually hours before the sun rises. He’ll dress in business-casual attire, with a backpack slung over his suit jacket, hanging by the subway doors to get off a few stops down.

Troy Vincent likes to keep it nondescript, unless you’re a rabid Eagles’ fan who may recognize his face from his playing days.

Vincent, the NFL’s Executive Vice-President of Football Operations, puts in a typical 65- to 70-hour work week during the NFL season. In season, he’s easily working a 12- to 14-hour day. Off season, 9- to 10-hour days are more the usual.

Vincent answers to only one man, NFL Commissioner Roger Goodell.

He played 16 NFL season between Miami Dolphins, Philadelphia Eagles, Buffalo Bills and Washington Redskins; half were spent with the Eagles.

Vincent, 48, is the first former NFL player to carry this role, which he’s done since Goodell named him to the position in March 2014.

He’s an important part of the NFL hierarchy. If Goodell is the NFL’s four-star general, Vincent is the NFL’s master sergeant. On Sundays, Vincent is the NFL’s football czar, with the help of his former Eagles’ teammate Jon Runyan, responsible for game-day operations. It encompasses everything from uniform violation, field conditions, weather, to the flow of the game, to hits on defenseless players, roughing the passer, to the equipment that players are wearing, to what the bubble looks like involving fan protection/fan conduct, to facility security, to working with network partners from the NFL hub in Manhattan.

He’s constantly on the computer and on the phone. Vincent, the former Wisconsin and Pennsbury High star from Trenton, N.J., says he’s able to do it because of an “excellent senior staff.”

Away from the field, he’s entrenched in player involvement, constantly working with the representative NFL clubs and officiating.

When he’s not dealing with the NFL, he’s involved with every level of football, entrenched with youth-level football, high school football and the various platforms of college football.

“What I like most about my job is the interaction with the 32 clubs and how they’re working with their youth level, their active level and what they’re doing with their legends, those who wore their uniforms and who they’re still in contact with,” said Vincent, who graduated with a BA and is finishing an MBA program at Thomas Edison State University, in Trenton, N.J.

“Every club is different,” Vincent added. “They have their own leadership styles, different nuances, their respective demographics are different.

“I’ve said this before, if you can play in Philly, you learn and embrace accountability. It’s a very blue-collar town and region, and the fans demand performances. When you don’t perform, they’ll let you know. It’s helped me do this job, because there is something that has to be said about accountability. It’s not about what you say, it’s about performance and there are no excuses.

“What I understood coming back to play at home, it was simple: Perform—and be available, to the media and to the community.”

The NFL is very healthy right now. The league is still the top tier among the among the major pro sports in the United States.

For example, the 2019 NFL Draft set new TV ratings and viewership marks, according to Nielsen. It was shown for the first time on network TV going up against regional regular-season Major League Baseball games, and the NBA and NHL playoffs—and blew those respective leagues out of the water. Coverage of the draft on ABC, ESPN, ESPN2, ESPN Deportes and NFL Network (plus ESPN and NFL digital properties) averaged 6.1 million viewers, up 11 percent from an average of 5.5 million for the 2018 draft, which was the previous high.

“I like to call it the greater game, and the game is very healthy right now,” Vincent said. “How many entities can actually bring people together and influence so many people, and be a bridge builder than the NFL? The love and passion the fans have for their teams and player are so deep, it goes far beyond Sunday. It affected how people work and how they feel during the week.

“I was a multi-sport kid growing up, but nothing gave me the aspirations and the motivation that football did. It’s still one of the lasting team sports. And I can go back to Super Bowl LII, because I grew up an Eagles’ fan. I had to watch what I said and did during that Super Bowl week, because my mom, my aunts and uncles, it wasn’t ‘the Eagles,’ it was ‘We’re going to get it done.’

“Even my old teammates, family and friends, it was all ‘We.’ That Eagles’ Super Bowl win changed the Delaware Valley. It will never be the same again. That kind of impact is going on all over the country. And guess what area showed us, and showed the NFL, what is possible at the draft? That started in Philly in 2018. Guess who showed us the possibility of what a draft can look like?”

The NFL remains vibrant and strong. The ratings show that. There are all-time greats like Tom Brady and all-time coaching legends like Bill Belichick still in our midst, and the emergence of burgeoning superstars like Patrick Mahomes and Carson Wentz, continue to fortify the foundation of the NFL.

“I’ve said this before, if you can play in Philly, you learn and embrace accountability. It’s a very blue-collar town and region, and the fans demand performances. When you don’t perform, they’ll let you know. It’s helped me do this job."

The league just finished arguably one of its most competitive seasons.

While the NFL remains bright, the game of football itself is in a little peril—and it’s something Vincent is also very aware of.

Fewer number of kids are playing football in the U.S. today. High school teams that once had 40 to 50 players are down to half that number, while other schools don’t even have enough players to support a team. Parents, mostly mothers, fear their sons playing the game at the youth level may lead to larger repercussions in the future, namely Chronic traumatic encephalopathy (CTE) as a major concern.

According to the National Federation of State High School Associations (NFHS), there has been a considerable drop in football participation since 2007.

Football still remains the most popular participation sport among high school boys, the numbers have declined for the second year in a row, according to the NFHS, there was a 2-percent drop in football participation in 2017 from 2016, which was slightly less than the 2.5 percent drop in the 2015 to 2016 season. Since 2009, the numbers of boys playing was decreased by seven percent.

“We’re at a place where what was acceptable in the past is no longer acceptable,” Vincent said. “That’s at every level. Some of the rule adjustments are necessary changes. As a steward of the game, my priority is to leave the game better than when I arrived. I’m also a father of student athletes. My sons play football.

“At the higher level, for example, the blind-side block. We’re talking about the use of helmets; it’s not making the game softer. We’re looking to play the game smarter. What I was taught then is not acceptable now. We’re always looking at player education.

“You can have all of the excitement and the big hits, but there are things that are happening today, we know better. We can’t allow it. Cleaning up things that were acceptable during my era can’t happen anymore—and begins at the grassroots level with the coaches and their language. It starts with teaching the babies—from the language used with the kids to the techniques they’re being taught.

“Parents today have valid concerns about protecting their children in all contact sports. We need to educate parents about the game and validate coaches, plus make sure kids have the proper, right-fitting equipment. Parents should educate themselves about the equipment, rules, and technology used to protect their children as well as about the values and benefits of playing football." 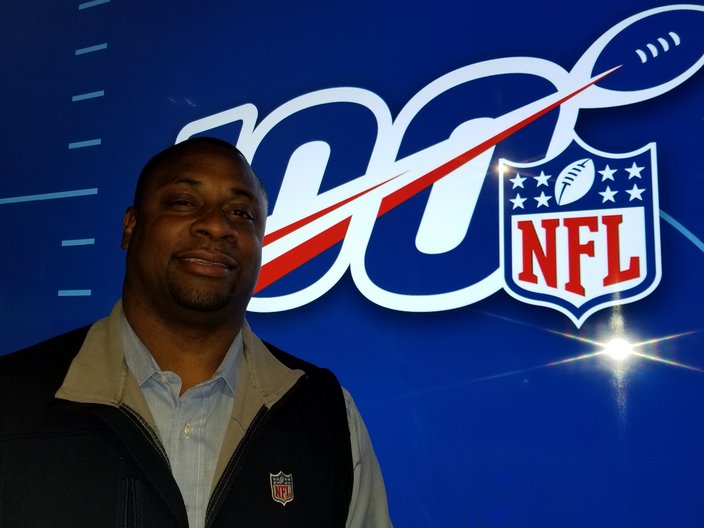 Vincent admits there is a long way to go—but he’s pleased with the progress the NFL has made in this area.

“What also I love about my job is the ability to make a difference,” Vincent said. “I love talking about the possibilities of what is to come. We’re talking about having a regular-season game in China. The game is growing that much. My biggest challenge of the job is tradition versus innovation.

“The National Football League doesn’t make the rules. The 32 teams make the rules. The NFL enforces and administers the rules. Sometimes there is that false narrative out there, that ‘we the league’ are doing this, when the rules are in place by majority rule. Meeting everyone’s expectations is another challenge, and that’s not going to happen, because you can’t make everyone happy all of the time.”

When Goodell leaves, there a good number of people who wouldn’t mind seeing Vincent inherit the position as NFL Commissioner. He would be the first former player to head the league, and first African-American to be NFL Commissioner.

Vincent has five children, who he’s very proud of, will get the No. 6 train again next week and be the one of the first to walk into the NFL Manhattan offices.

"And guess what area showed us, and showed the NFL, what is possible at the draft? That started in Philly in 2018."

“I learned how to separate heart and head, and through the years, I’ve learned how to listen,” Vincent said. “I’m part of a game that impacts lives, and that’s what motivates me. I want to be someone who can make a difference in my community and what the Lord allows me to do. I want to do more, more beyond football. We have areas of this country, areas around the world, that don’t have drinking water.

“We have a huge opportunity to grow football internationally, and show people how great our game is. We, the National Football League, can begin drawing more from the rest of the world.

“We have great men that play in this league. But I know we have a very small percentage that still need guidance. My tactic and approach to players is to go to them. I’ll go through their agent to go through their team, and make sure I sit and speak with them.

“The Lord has allowed me to do that. I told the Commissioner Goodell that I’m here to serve him. When he moves on, we’ll see where God has me going. I like what I’m doing. I have no aspirations about being commissioner. I enjoy serving Roger Goodell.

“Today, I’m focused on today and the current membership, which is our 32 teams and their ownership. I love what I do.”