The Rail Park is beginning to take shape 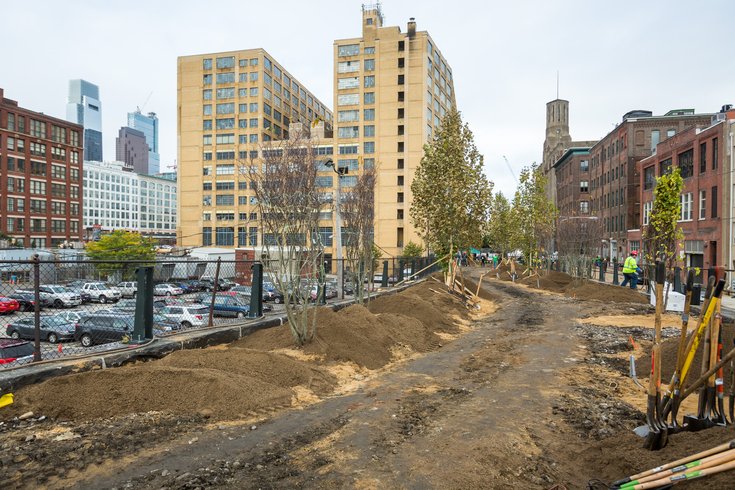 The first phase of the much-anticipated Rail Park is slated to open early next year, bringing a hint of reality to an ambitious vision – a three-mile park that commences at the former Reading Railroad viaduct in Callowhill and concludes beneath an abandoned railroad tunnel near Brewerytown.

"You've been looking at renderings for years and years," said Nancy Goldenberg, vice president of planning and development for the Center City District, which has spearheaded fundraising efforts, on Friday morning. "Finally, you begin to see it take shape. It's just such a proud moment and very gratifying."

Construction on the first phase – a $10.3 million endeavor – began nearly a year ago. Crews removed a mixture of ballast and soil, bringing the structure to down to its steel framework before filling it with concrete. Last week, 18 canopy trees were planted along the viaduct, its first bit of landscaping.

On Friday, Timberland organized a team of volunteers to install some 1,100 plants, which cover some 25,000 square feet of landscaping. Each year, the outdoor apparel company helps a city create or restore a section of green space equivalent to the size of its retail store.

It found the Rail Park an intriguing opportunity.

"We're super excited to be a part of this project and see the Rail Park come to life," Senior Manager Atlanta McIlwraith said. "We're excited to keep bringing green spaces to cities."

The first phase of the Rail Park will stretch a quarter-mile from Broad and Noble streets to the 100 block of Callowhill Street. The Center City District intends to extend the segment by adding another mile along the viaduct to Fairmount Avenue and Ninth Street.

At its grandest vision, the park one day could extend westward through a below-street-level stretch known as The Viaduct and an underground section known as the Tunnel.

With the first part of the trail nearing completion, here are four tidbits about you might not have known one of Philly's biggest coming attractions: 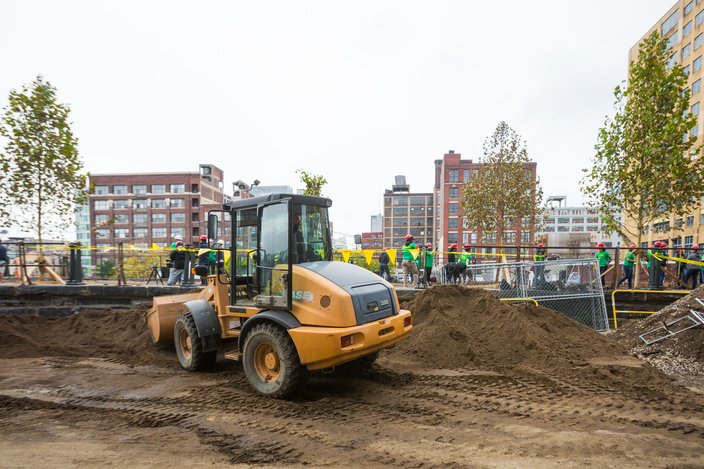 Construction crews, engineers and volunteers work at the Rail Park on Friday, Oct. 13, 2017.

'THE REAL DEAL': HISTORY AND INDUSTRY ON DISPLAY

The views from the Rail Park feature an abundance of industrial buildings that display architectural styles dating back to the mid-19th century, when Callowhill served as a manufacturing hub during the Industrial Revolution.

Fueled by the nearby Baldwin Locomotive Works, the neighborhood featured all sorts of manufacturers, including companies that produced envelopes, hats and shoes, among other goods.

Nothing matched Baldwin Locomotive, which built steam engines at its facility at Broad and Spring Garden streets.

"The trains would come out of Baldwin Locomotive and come right on the rails here," Goldenberg said. "They would be shipped all over the world. ... This was really a gritty, noisy, dirty place."

Many of the buildings that housed these companies still remain, including the Lasher Building, an Art Deco style warehouse that housed a printing company.

Others include the Goodman Brothers and Hinlein Company's factory building, the Heid Building and the Terminal Commerce Building where the Reading Railroad had its headquarters.

Fourteen blocks within the neighborhood – 40 buildings, 25 sites and viaduct itself – were designated as the Callowhill Industrial Historic District in 2010. The district is listed on the National Register of Historic Places.

"Many cities try and fake this stuff, but this is the original," Goldenberg said." This is authentic. That's the feeling we want to give the visitors that come to this park."

The Reading Railroad viaduct, constructed in the 1890s, transported both passengers and freight to and from Center City. But trains ceased running along the viaduct in 1984.

At one point, the viaduct connected into Reading Terminal, but that portion since has been demolished. 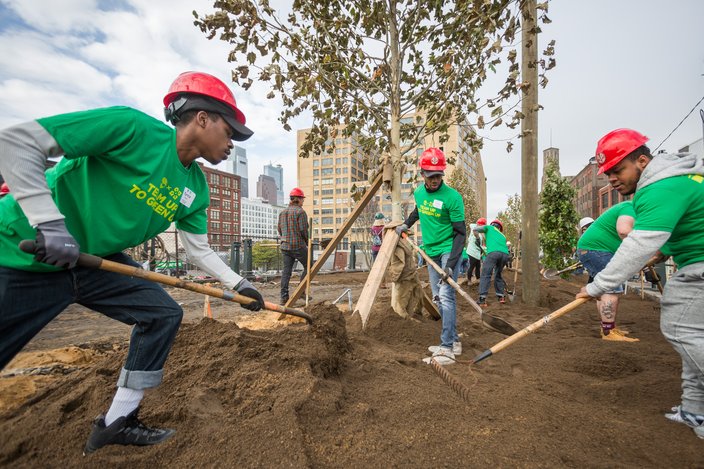 The first phase of the Rail Park will feature a variety of landscaping, including canopy trees like Shingle Oaks, Kentucky Coffee trees and London Planetrees. There also will be more than 40 understory trees, including Eastern Red Cedars, American Hollies and River Birches.

More than 1,000 shrubs and perennials, including Virginia Sweetspire, Ostrich Fern and Spicebush, will line portions of the Rail Park. Eight hanging planters will hold native grasses and spring bulbs.

The idea was to provide a green space for a community that lacks one by transforming the viaduct – an abandoned structure that would prove costly to demolish.

"For the workers here, for the residents that have lived here for a long time – they don't have front stoops and they don't have backyards," Goldenberg said. "This Rail Park represents to them a green, open space where they can talk to their neighbors, walk their dogs and have lunch and sit around after dinner and talk."

Many of the park's features – including the landscaping and the fixtures – were designed based on their recommendations from the community.

Five wooden porch swings will mark the end of the first phase – a feature loved by residents. There also will be tiered, wooden seating arrangements designed to hold 30 to 60 people, providing nearby schools a spot to hold outdoor classes.

"This was very much designed with the residents in mind," Goldenberg said. "I'm sure we'll get people from all over the region and tourists coming here, too. But I think, first and foremost, the priority is (that) this is a place for the community."

Additionally, an interpretative wall along the 13th Street entrance will tell the story of the neighborhood's industrial history. 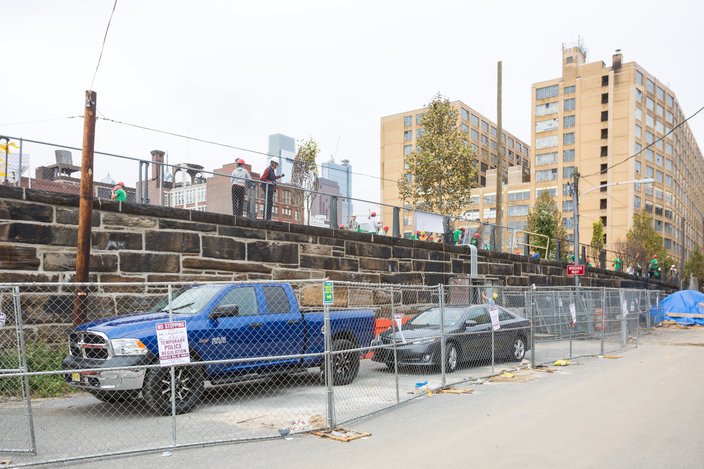 The elevated Rail Park near 12th and Noble Streets stretches through an historic industrial district in Philadelphia's Callowhill neighborhood of Philadelphia.

Naturally, the Rail Park has drawn comparisons to the High Line, a highly-acclaimed park constructed atop a viaduct in Manhattan. But while similar, the parks won't be quite the same.

For one, the Rail Park has an opportunity to be wider and longer.

"It will be much wider in the future," Goldenberg said. "This piece happens to be the narrowest piece."

If the Rail Park grows to include segments known as The Cut and The Tunnel it will extend three miles. That length is more than double the 1.45-mile High Line.

But even the vibe of the Rail Park may be different.

The first phase won't have as many detailed furnishings and furniture pieces as the High Line does, Goldenberg said. But it will include gathering spaces for educational, culture and wellness programs, as well as other large groups.

"It's a different city and a different sort of atmosphere," Goldenberg said. "But, again, I think we have really tried to pick up on the community aspect of what we heard. It will be beautiful." 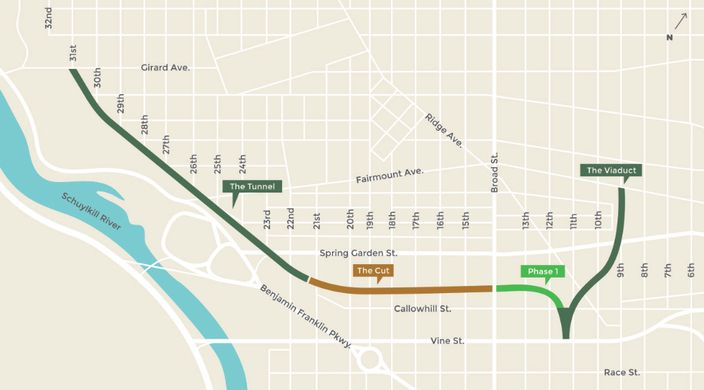 Construction has started on The Viaduct segment of Philadelphia's Rail Park, which one day could stretch from Callowhill to Brewerytown.

ALL THE WAY TO BREWERYTOWN?

The grandest vision of the Rail Park has it extending all the way to 31st Street and Girard Avenue, an endpoint that will leave visitors just a short distance from the Philadelphia Museum of Art, Boathouse Row and the Philadelphia Zoo.

As envisioned by Friends of the Rail Park, a nonprofit conducting fundraising and advocacy efforts, it one day will include three segments – The Viaduct, The Cut and The Tunnel.

The Viaduct includes the portion currently under construction, as well as future above-ground phases stretching along the abandoned viaduct to Fairmount Avenue and Ninth Street.

But the Rail Park eventually may also include segments that run beneath Philly's streets.

The Cut, an open-air segment that runs below ground, would extend along abandoned railroad tracks stretching from Broad Street to the back of the Rodin Museum at 22nd Street. The tracks are bordered by 30-foot, stone walls and run beneath various city bridges.

The Tunnel is an abandoned railroad tunnel that runs beneath Pennsylvania Avenue from 22nd to 27th streets. Naturally illuminated, the tunnel is 50 feet wide and lined with stone walls. It is supported by vaulted brick ceilings that reach 25 feet high.

There is no timeline to complete these segments.

"It does go subsurface," Goldenberg said. "In terms of the Center City District, we're focused on finishing this and then hopefully moving on to the rest of the elevated (segment)."