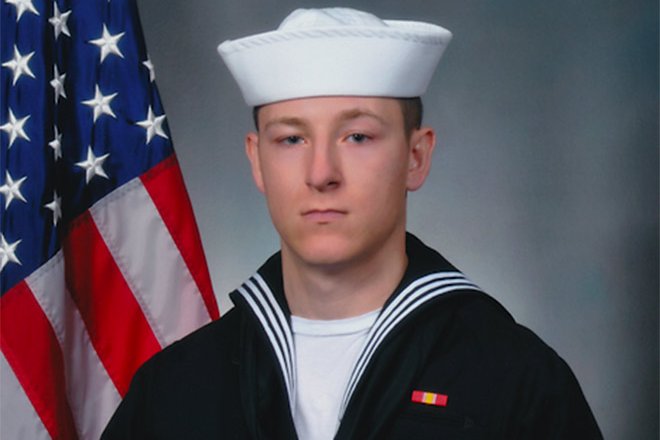 Kenneth Aaron Smith of Cherry Hill was one of the 10 U.S. sailors killed in August when a Navy ship collided with an oil tanker off Singapore. He was 22.

Services are set for Saturday for the South Jersey sailor killed aboard the USS John S. McCain when his ship collided with a tanker near Malaysia.

An electronics technician 3rd Class, the 22-year-old’s body was eventually recovered by divers.

The collision, which killed nine other U.S. sailors, remains under investigation.

As part of the investigation, a team from the Navy’s U.S. 10th Fleet cyber arm traveled to Singapore to see if a reported steering failure of the ship was a result of hackers' tampering.

The Navy just announced Thursday that going forward all collisions will examine the prospect of cyber tampering.

On June 17, the USS Fitzgerald, a guided missile destroyer, was hit by a container ship. Seven sailors died. Her commander and two other officers were relieved of command as a result. There has not been any punishment so far in the McCain incident.

Smith was a 2013 graduate of Cherry Hill High School East. Born in Michigan, he moved to Chesapeake, Virginia, when he was 10.

He followed his father and his grandfather into service with the Navy.

According to his obituary, "My bucket list of things to do before I die is close to completion already. I've skydived, jumped headfirst from an 8-story tower, have seen virtual reality at its baby stages, and will soon be traveling to the other side of the world."

The full obituary is here.