The sold-out live show, based on the CW musical series, heads to the Trocadero Saturday night 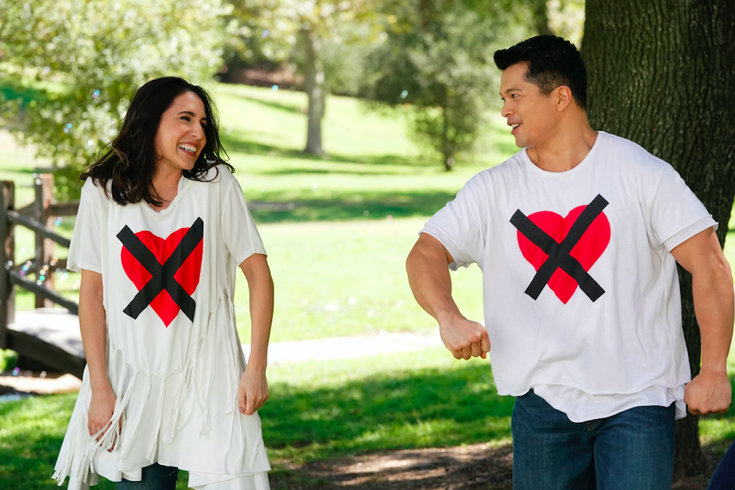 “Crazy Ex-Girlfriend Live,” the tour, sold out its entire run within minutes. It hits Philadelphia Saturday, April 7 for a show at the Trocadero.

In a lot of ways, “Crazy Ex-Girlfriend” is unlike any other show that’s ever been on television.

It airs on the CW, despite not having a ton in common with any of the network’s other shows. Its heroine is a mentally unbalanced stalker. The cast, led by co-creator/star Rachel Bloom, was almost entirely unknown prior to the show’s debut. Its generally light and often funny tone is occasionally balanced with darker plots that touch on mental illness, depression, and general heartbreak.

Oh – and the show is a musical, having produced nearly 100 full-on musical numbers in its three seasons so far, in a wide variety of styles and influences.

There’s another pertinent thing about “Crazy Ex Girlfriend”: There are weeks when it is either the lowest-rated show on broadcast television, or something close to it. But while the series’ fanbase is small, it’s rabid and enthusiastic, frequently flooding social media with video clips of the show’s many, singable songs.

The cult of “CXGF” is dedicated enough to not only get the show renewed repeatedly – it was recently picked up for a fourth and final season – but also to justify a 10-city national tour called “Crazy Ex-Girlfriend Live.” The tour, which sold out its entire run within minutes, will reach Philadelphia tomorrow night for a show at the Trocadero.

PhillyVoice spoke with Gabrielle Ruiz, the actress who plays Valencia on “Crazy Ex Girlfriend,” earlier this week just as the cast had arrived in Boston for the East Coast leg of the tour.

What can we expect from the live show?

It will consist of “the cast performing songs from the show,” she said, and while the actors won’t be in character, the show will contain elements of improvisation and comedy, as well as a peek at the cast’s natural, real-life chemistry.

“Fans are going to see the magic that goes on backstage,” Ruiz said.

“This concert has been created with such a coalescence of creators in their trade.”

Indeed, as she noted, the cast members all come from different corners of the entertainment world: Bloom got her start in stand-up comedy and later as a viral YouTube sensation. Donna Lynne Champlin (who plays Paula) is a decorated Broadway veteran. And Pete Gardner (Darryl) comes from the Chicago improv scene.

Fans are going to see the magic that goes on backstage."

As for Ruiz, the Texas native got her start as a dancer, and became enamored after she saw her first Broadway show at age 13, later joining the school choir on her mother’s advice. She got serious about musical theater in college, and after a stint in summer stock in Wichita, Kan., she headed to Broadway. Between national tours and New York, her stage credits include “Evita,” “If/Then,” “A Chorus Line” and “In the Heights.”

Ruiz said that she’s been enjoying the recent resurgence of musicals throughout popular culture. She watched “Jesus Christ Superstar Live” with John Legend on NBC along with everyone else last Sunday night, in part to watch her friend Jason Tam, with whom she co-starred in Broadway’s “If/Then.” But she was also thinking about, she said, “that little girl in South Texas – who has a chance to see 'Jesus Christ Superstar' on TV, or that stream of 'Crazy Ex Girlfriend,'” and follow her own dreams of being a performer, just like Ruiz did.

While she was a guest star in the first season, Ruiz has been on “Crazy Ex-Girlfriend” from the beginning as Valencia Perez, who began the series as something of a villain – the narcissistic girlfriend of Josh Chan (Vincent Rodriguez III), and romantic rival of protagonist Rebecca Bunch (Bloom). The character has evolved over the years, becoming more of a friend to Rebecca over time, and her arc took a rather shocking turn in season 3.

Valencia also has been a part of some of the show’s more memorable musical numbers, including “Let’s Generalize About Men”:

and “Women Gotta Stick Together”:

Ruiz won’t say what songs are on the setlist Saturday night, but she did share that the show has been different at each stop. The show’s creative team, including songwriters Jack Dolgen and former Fountains of Wayne bassist Adam Schlesinger, will sit in as a live band for the East Coast dates, something they didn’t do earlier in the tour. The show has also had a revolving cast throughout the tour,  but Ruiz did say that Champlin, who has been getting “endless standing ovations” on earlier stops, will be on hand for the Philly show, along with Bloom, Rodriguez, Gardner and others.

Her advice for fans coming to the show Saturday night? Arrive early. The venues on the tour have had general admission seating, leading to uncommonly long lines and some attendees showing up as many as four hours early to get decent seats.

Ruiz has performed in Philadelphia before, she said, most notably in a touring production of “A Chorus Line” back in 2008, when she played Diana Morales. She remembers Philly as “one of the most beautiful cities to visit [during] the holidays. A little bit of snow, but not anything too dramatic.”

What’s next? The rest of the tour, which will wrap up in Covina, Calif. – near the show’s setting of West Covina – on April 11. After that is the fourth and final season of “Crazy Ex-Girlfriend.” The cast, she said, actually got the news about the renewal while in the air, from Seattle to Chicago, and even woke each other up, one by one, to share the news.

While Ruiz doesn’t know what the final season holds for Valencia or the show in general, “I can’t wait to find out,” she said.

“I’m just happy that we’ll be able to plan the rest of our year.”