The incident occurred during a Black Lives Matter protest 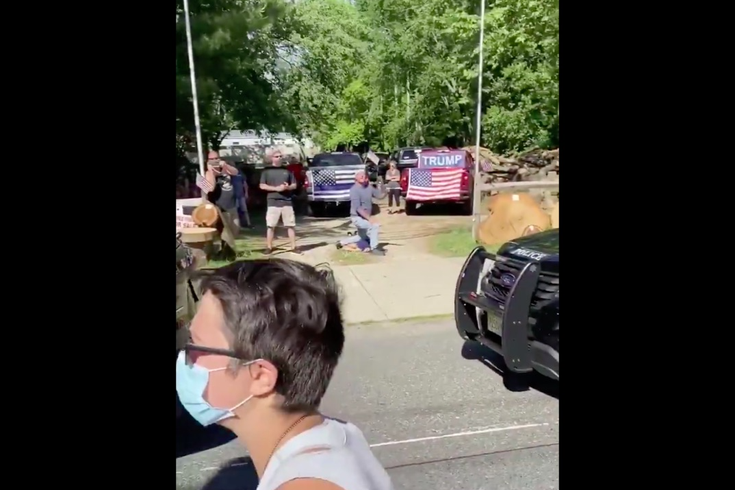 A New Jersey Department of Corrections officer, one of two men seen in a video mocking George Floyd's death, has been suspended without pay.

The New Jersey Department of Corrections has moved to terminate an officer who allegedly mocked the police killing of George Floyd during a Black Lives Matter protest in Gloucester County earlier this month.

The NJDOC issued removal charges Thursday against the officer, who been suspended without pay pending a due process hearing – part of the procedure for dismissing unionized employees.

The department did not identify the officer in announcing the charges, but media reports previously identified him as Joseph DeMarco.

A video from a the protest in Franklin Township showed two men mimicking Floyd’s death as demonstrators marched by. One of the men could be seen lying on the ground while the other knelt on his neck and yelled at the protesters.

Trump supporters are disgusting. These Franklinville, NJ Trump supporters mockingly re-enacted the George Floyd murder. This needs to go viral! Who is this man? pic.twitter.com/xOOV2F7yNs

Joe DeMarco was originally hired in 2002 and previously worked at the Albert C. Wagner Youth Correctional Facility in Burlington County until 2019, according to the Cherry Hill Courier Post.

The Franklin Township Police Department is still conducting an investigation into the matter. Anyone who witnessed the incident or has any relevant information is encouraged to contact police.

Floyd, a black man, was killed on May 25 while in the custody of Minneapolis police, sparking nationwide demonstrations calling attention to police brutality and systemic racism.