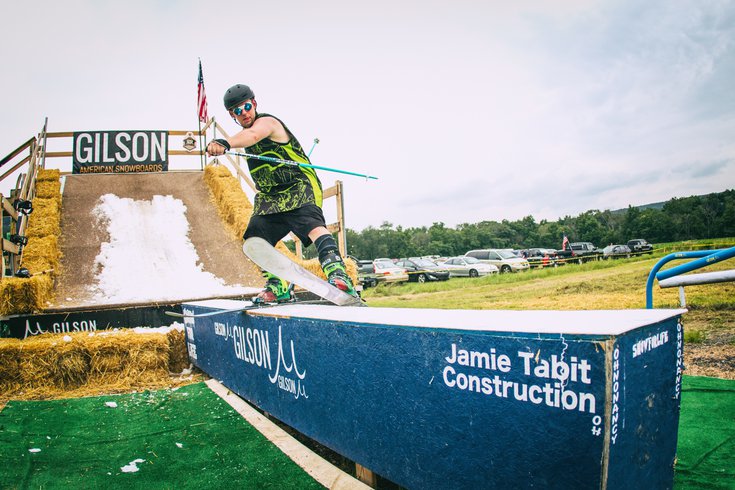 Snyder County-based Gilson Snow is hosting a Summer Snow Day Festival outside of Xfinity Live! on Saturday, July 16. There will be snow, snowboarding competitions, live music, and tons of beer to sample beginning at 2 p.m. Portions of proceeds will be donated to two charities.

For those thinking of ways to beat the heat, Winfield, Snyder County-based Gilson Snow has just the thing: its Summer Snow Day Festival is being held outside Xfinity Live! on Saturday, July 16 beginning at 2 p.m.

The festival is the first-of-its-kind away from the company's Central Pa. location, featuring real snow, snowboarding competitions, ice carving, ski artist showcases, and a makeshift ski lodge. There will also be live music, games and the Knoebels Kids Zone for families, as well as more than 50 beer options to choose from.

"The Susquehanna River Valley Visitors Bureau has been a partner with Gilson Summer Snow Day from its first event and is thrilled to be a partner for the Summer Snow Day in Philadelphia," said Andrew Miller, the bureau's executive director. "It's not lost on us that Gilson could have set up its headquarters anywhere in the United States — especially one that has more reliable snow in the winter."

General admission tickets are $45, which includes a souvenir tasting glass. VIP admission is $65. In addition to a free glass and unlimited tasting of more than 50 craft beers, VIP ticketholders will also receive early access beginning at 1 p.m., access to an indoor open bar and buffet, 20% off the Gilson Snow store, two full-size drink tickets, and a Gilson 12 oz. cup.

In addition to snowboarding and a ski lodge, the Summer Snow Day pop-up includes a Philly Time Machine inspired by "Back to the Future." Live music will be provided by Matt Freedman and The Herd, and there will be DJs set up at multiple stages.

Featured brews and other alcoholic selections to sample come from the Susquehanna River Valley and from local and regional providers.

The pop-up festival isn't just about having winter fun in the middle of summer; it's about protecting the slopes and providing important awareness about ensuring access to skiing and other winter sports for all people.

A portion of the proceeds will be donated to the Share Winter Foundation, which provides grants to improve the lives and health of youth with winter sports.

"Share Winter is honored to be a part of Gilson's Summer Snow Day as we prepare to expand our reach in Pennsylvania in winter 2023," said Constance Beverley, CEO of Share Winter. "Partnering up to create access and on-show opportunities is a hallmark of Share Winter's work, and taking a moment mid-summer to share our love of winter in Philadelphia is a dream."

Additional proceeds will be donated to Carve for Cancer, a non-profit aimed at ending blood cancers through winter sports fundraising events.

"At Carve for Cancer we're 'shredding blood cancer' and Gilson has been a huge supporter since day one," said Josh Frank, CEO of Carve for Cancer, Inc. "Funds raised by our organization fund life-saving research and patient care through our Live Like Brant Foundation."