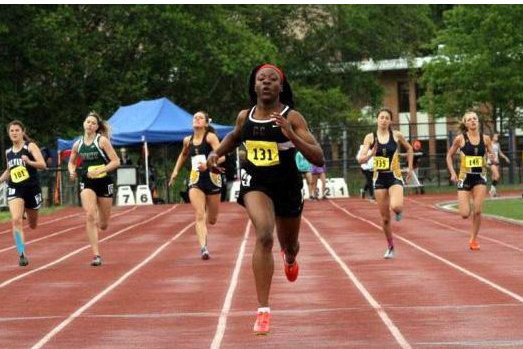 Thelma Davies blows away the competition at the PIAA District One Track and Field Championships. Davies won gold medals and set state records in the 100-meter and 200-meter dashes.

Thelma Davies had an opportunity Wednesday to observe what everyone else sees when the Girard College freshman sprints.

Girard College, a private high school in Philadelphia, formally honored Davies for obliterating the Pennsylvania record in the 100-meter dash while winning a pair of gold medals at the PIAA Track and Field Championships last month. The school played a video of the race during an assembly, in which she easily beat the second-place finisher.

"... I'd time her in some of the interval workouts and I'd have to question myself, did I hit the button? What's going on here? She was just running that fast during some of the workouts." – Diamond Woolford, Davies' coach

"When I'm running, I just feel like I'm running," Davies said. "I don't know how far I am from the other girls. But when I see it on the video, it's like, 'Did I just really run that fast compared to everybody else?"

Her time, 11.59 seconds, bested the previous state record by nearly two-tenths of a second – a wide margin for sprinting events. Plus, the former record-holder, Lauryn Williams, went on to become an Olympian after running an 11.58 in 2001.

Davies also tied Williams' state record in the 200m dash at the PIAA Championships, winning the event in 23.85 seconds. Now, she aspires to continue on Williams' path, setting her sights on running in the 2020 Olympics in Tokyo.

She got some advice from Olympic medalist Carmelita Jeter when she met the sprinter at the Penn Relays.

"I try to imitate her form," Davies said. "I told her I want to be just like you. She was like, 'If you just work and dedicate your life to that goal, you can do it.'" 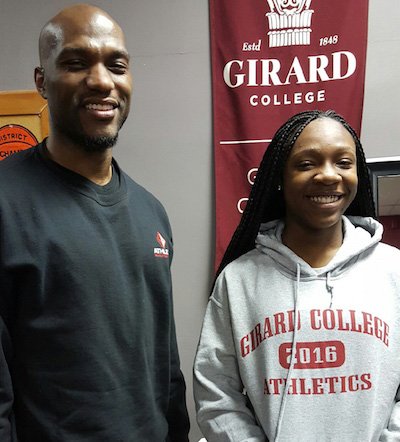 Davies first realized she could compete with nearly anyone while at the New Balance Nationals Indoor meet, which draws some of the most talented runners in the country. There, she set the freshman record in the 60m dash, finishing fourth overall in 7.75 seconds.

"Even though it was fourth place, I was so happy because I was running against seniors and juniors," Davies said. "I was the only freshman up there. I felt like I really accomplished a lot."

Her accomplishments were only beginning.

Davies also broke the District One Class AA records in the 100m and 200m before her record-breaking performance at the state meet in Shippensburg. The Pennsylvania Track and Field Coaches Association named her its Girls Athlete of the Year.

Her coach, Diamond Woolford, expected Davies to be fast, but even he was surprised by some of her times.

"Last year, just working with her, I remember seeing that she's definitely good," Woolford said. "Then this year I was expecting fast times, but the times that she ran, I wasn't expecting them to be that fast. ... I'd time her in some of the interval workouts and I'd have to question myself, did I hit the button? What's going on here? She was just running that fast during some of the workouts."

Due to the small size of Girard College's track squad, Woolford often is able to work with Davies one-on-one. Woolford, a state champion for Girard College in the 1990s, acknowledges Davies' natural talent, but credits her dedication and competitiveness as additional sources of success.

"The mental aspect of track and field, she has it naturally," Woolford said. "She just goes out and competes, no matter who her competition is. Of course, you get the nervous jitters, but she still goes out there and competes."

Davies credits her drive to the lessons instilled by her first coach, the late Richard Leak. When she began running in sixth grade, Davies said Leak would just look at his timer and laugh. Now, he serves as her inspiration.

"He told me before he passed away that he saw potential in me," Davies said. "After he told me that, I just made a vow to never quit for him."