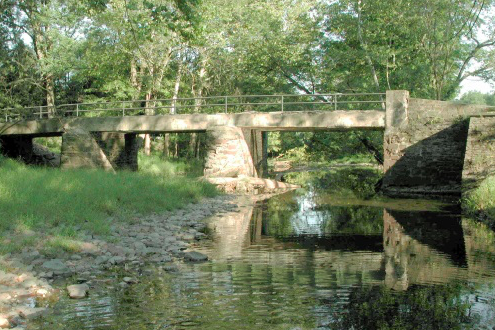 An environmental justice and preservation group in Bucks County is challenging a PennDOT plan to demolish a historic bridge in Tinicum Township.

The Delaware Riverkeeper Network , based in Bristol, is demanding a fair review for the Headquarters Road Bridge over Tinicum Creek, alternately known as the "Burnt Mill Bridge" and the "Sheephole Bridge."

At more than 200 years old, Headquarters Road Bridge is among the oldest in the United States and stands as the nation's earliest documented example of a pier-to-pier bridge.


PennDOT is calling for its demolition and full replacement with a 24-foot-wide, two-lane modern structure. The agency contends the single-lane bridge is a road safety hazard and continues to suffer from structural deficiencies after it was deemed in "imminent danger" of failure in October 2015.

Activists with the DRN counter that PennDOT's report ignores conflicting environmental impact testimony from independent experts. They also claim the bridge, in addition to its historic importance, does not have a statistically alarming history of vehicular crashes as PennDOT claims. Replacing it would not only degrade water quality, the group says, but would require the seizure of nearby property through eminent domain.

“PennDOT’s decision to move forward despite evidence documenting significant community and environmental harms, and without the more robust analysis of environmental and cultural impacts the law requires, demonstrates their total disregard for the communities they’re meant to serve,” said Maya van Rossum, who leads the Delaware Riverkeeper Network. “For the integrity of the process, and to ensure full and fair protection of our historic and environmental resources, a full and transparent environmental impact analysis by an unbiased reviewer is necessary. We have seen several other PennDOT bridge replacement projects degrade water quality and habitat health in the Tinicum Creek and cause erosion for property owners along the waterway. PennDOT must not be allowed to repeat these harms."

PennDOT's consultant project manager for the Headquarters Road Bridge project, Ryan Wittington said, "It is simply not true that we are evading anything."

Because the project is receiving some federal funding, he said PennDOT is bound by the regulations of the National Environmental Policy Act, which require that a study of the project's impact.

That does not mean a project must have no impact on the environment, but Whittington said the impact should be minimized.

"There is no shortcut through these procedures," he said.

In addition to being wide enough to allow two cars to pass, the new bridge will be usable by the firetrucks and EMS vehicles from the nearby Ottsville Volunteer Fire Co. Also, the new bridge's design will feature stone found onsite so that it fits with the rural characteristics of the area.

"Multiple reports from outside analysts have made clear that building a new bridge would be financially and environmentally costly and less safe, and would destroy an irreplaceable part of history," the group said in a statement.

DRN put out a video explaining why repair of the bridge is better then replacement: